Take in myriad exhibits during the regular (free!) gallery crawl before CrawlAfterDark starts. 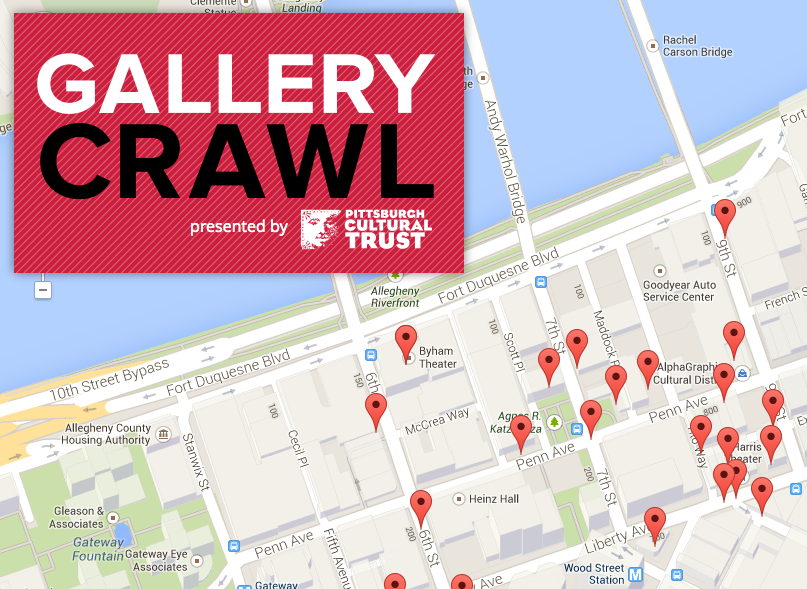 GALLERY CRAWL TURNS 10
The Pittsburgh Cultural Trust has planned a fully loaded 10th-anniversary Gallery Crawl for Friday night. Typically, the free crawls run from about 5:30-9 p.m., but during this CrawlAfterDark, ’Burghers can continue to gallery hop (for an inexpensive admission fee) until 10 p.m. at select locations, including SPACE and the 707 and 709 Penn galleries. While you’re in town, you also might check out the seventh annual Night Market, hosted by the Pittsburgh Downtown Partnership. The market, which also is open until 10 p.m. (at 131 Seventh St.), offers goods from 19 curated vendors, such as DeadBuryDead and Jones Robo-Works, as well as music from Duquesne University vocalist Tori Plack.

WRESTLING’S (SECOND-) BIGGEST NIGHT COMES TO PITTSBURGH
Sunday’s WWE event at Consol Energy Center, the 2014 edition of the Royal Rumble, is almost certainly the most significant Pittsburgh wrestling card in modern history. The Rumble often is the year’s most-hyped and talked-about wrestling event, outside of Wrestlemania. The titular happening is an over-the-top-rope battle in which 30 competitors enter the ring, one-by-one, at random. The last grappler standing is granted a match with the champion at Wrestlemania, ostensibly the year’s most-prominent confrontation. That’s why the Royal Rumble is important to the story. To the fan, it’s important because it’s unpredictable and fun. Get a full preview of the sold-out event in this week’s edition of After Dark!

PITTSBURGH’S ROCK HALL INDUCTS INAUGURAL MEMBER WITH A MARQUEE CONCERT
Pittsburgh’s rock ‘n’ roll history runs deep behind the scenes and in front of the spotlights. The establishment of a Pittsburgh Rock ’n Roll Hall of Fame, then, seems long overdue. Fortunately, the ’Burgh’s own rock hall is debuting in style, with an all-star concert tonight at the Hard Rock Cafe to induct inaugural member Rich Engler, the legendary concert promoter who brought rock’s biggest names to Pittsburgh. Tonight’s band will feature Joe Grushecky, Donnie Iris, B.E. Taylor and Scott Blasey, and the show benefits the Cancer Caring Center.

IN THEATERS: New films coming to Pittsburgh screens in a sparse weekend include a head-scratching monster mashup called “I, Frankenstein” and the absolutely dreadful “Gimme Shelter,” starring Vanessa Hudgens as a pregnant, homeless teenager. “Frankenstein” hasn’t been screened locally, so you’re on your own — but PMweekend is happy to confirm that “Gimme Shelter” should be avoided at all costs. Seems like a fine weekend to catch Oscar nominees “American Hustle,” “The Wolf of Wall Street,” “Her” and “Inside Llewyn Davis,” all still playing in local theaters. —S.C.

On Saturday at 1 p.m., tap into your creative side and document some family history during a memoir writing workshop, "Where You Live: Writing about Yourself and Your Family," at the Sen. John Heinz History Center. Call 412/454-6426 to reserve a spot.