The Aquaponics Project can produce five tons of food in 160 square feet. 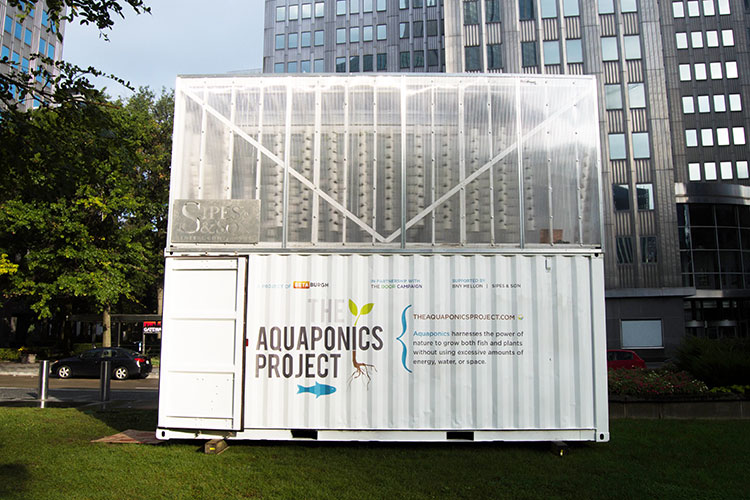 In the movie “The Martian,” Matt Damon’s character grows potatoes and other vegetables inside a small space station on Mars using only his own waste as fertilizer. Five Pittsburgh students’ winning project in the Ford College Community Challenge isn’t quite that unbelievable, but it’s close.

In 2015, students from Pitt, Carnegie Mellon University and the University of Michigan started a club called the Aquaponics Team to educate the community about food waste and food insecurity. Recognizing that too much food was going to waste while others in Pittsburgh didn’t know where their next meal was coming from, former Pitt student Vinh Luong entered the group in a competition, sponsored by the Ford Fund, to develop urban farming techniques.

Using a process that combines the science of growing plants in water versus soil (hydroponics), and raising fish and plants in an enclosed space (aquaculture), the team grew five tons of food in a 160-square-shipping container known as the Aquaponics Project.

Here’s how it works: fish wastewater is used to feed the plants, which in turn filter the water. Food for the fish is the only addition to the system.

Last year, the group deployed their first portable aquaponics farm, which grew basil and tilapia,  Downtown near the Gateway T Station. That container, now located in front of the Home Depot in East Liberty, can produce 10,000 pounds of food annually. The Pittsburgh team won $35,000 and a Ford Transit Connect van for their efforts.

“A lot of people are either really skeptical or awestruck about it,” says Luong, who has since transferred from Pitt to Michigan.

The East Liberty aquaponics farm is open for tours from late spring to early fall."

The Aquaponics Project now works with 412-Food Rescue, The Door Campaign and Repair the World to find ways to even more ways to better serve Pittsburgh.