Pitt has a chance Saturday to pull an upset reminiscent of last November’s improbable victory at No. 2 Clemson or, given Penn State’s No. 4 ranking, the chance to get humiliated in Beaver Stadium. 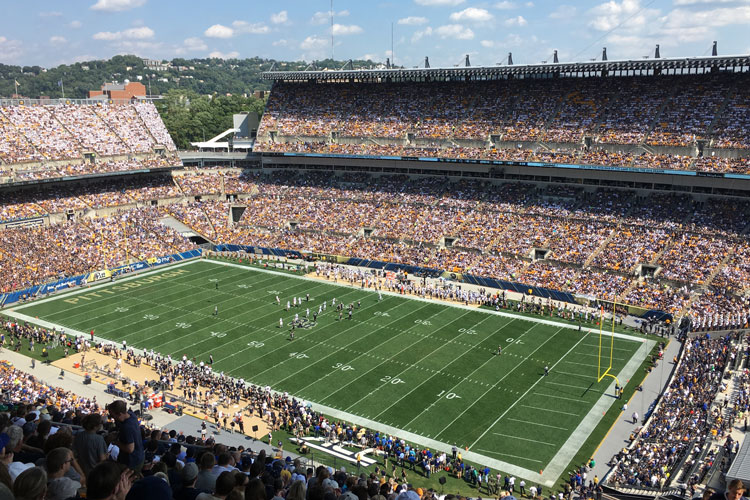 Pat Narduzzi knows enough about rivalries to understand Pitt-Penn State may not qualify on both sides.

“It’s an in-state rivalry, at least for us,” Pitt’s head coach offered this week.

The obvious inference was Penn State may not necessarily interpret the game the same way.

Given that Saturday afternoon’s meeting in Happy Valley will be just the second between the two since Pitt’s 12-0 victory at Three Rivers Stadium in 2000, Narduzzi may have a point.

Rivalries are renewed every season, not twice in 17 years (or, four times in 19 years if you extend through the conclusion of the current four-year agreement).

Pitt clearly does, and for Narduzzi that’s enough.

“If we think it is, then it is for us and it doesn’t have to be for them, it really doesn’t. Everybody has different rivalries.”

But times have changed.

And the current climate is such that Penn State can play before an announced crowd of 101,684 on a rainy Saturday for a laugher against Akron while Pitt is listing a gathering of 40,012 – not quite two-thirds the size of Heinz Field’s capacity of 68,400 – for an overtime survival of Youngstown State.

Penn State is also trying to defend the Big Ten Championship it won last season and reach the College Football Playoff after being unjustly denied a spot in the four-team tournament a year ago.

Pitt is trying not to lose at least five games for an eighth consecutive campaign.

But none of that will matter on Saturday.

Pitt has a chance to continue gaining traction under Narduzzi, the chance to pull an upset reminiscent of last November’s improbable victory at No. 2 Clemson.

Given Penn State’s No. 4 ranking, the 21-point spread and the Nittany Lions’ anticipated desire to avenge last season’s 42-39 loss at Heinz, Pitt also has a chance to get humiliated in Beaver Stadium.

How Pitt handles the emotion of the moment – throughout this week as well as on game day – will factor into whether the Panthers are ultimately looking at the former or the latter.

That and whether or not Narduzzi can somehow dial up a defensive answer for Trace McSorley and Saquon Barkley.

“I think you have to have composure and you worry about yourselves. It’s all about what we do in this room, what we do as coaches, the preparation we put in, the focus we put in on Tuesday Wednesday, Thursday in practice.

“The preparation is the key, and all the rest of those things come along with the game.”

In other words, to make this more of a rivalry Pitt must treat it like less of one.

Rather than foaming at the mouth to beat Penn State for the sake of beating Penn State, Pitt is going to have to meticulously and methodically plan, practice and prepare to win a road game against a Top-5 opponent.

And then execute to near perfection and hope to catch a couple of breaks along the way.

But another Pitt victory would certainly get Penn State’s attention, maybe even qualify Pitt as an acknowledged rival of the Nittany Lions, if only temporarily.

“The odds are against us, I’m not blind to that,” Narduzzi admitted. “It’s OK.

“It’s nice to be the underdog.”

That’s one way to sneak up on a rival.