She shares the truth about everything from driving technique to Terrible Towel etiquette for anyone new to the 'Burgh. 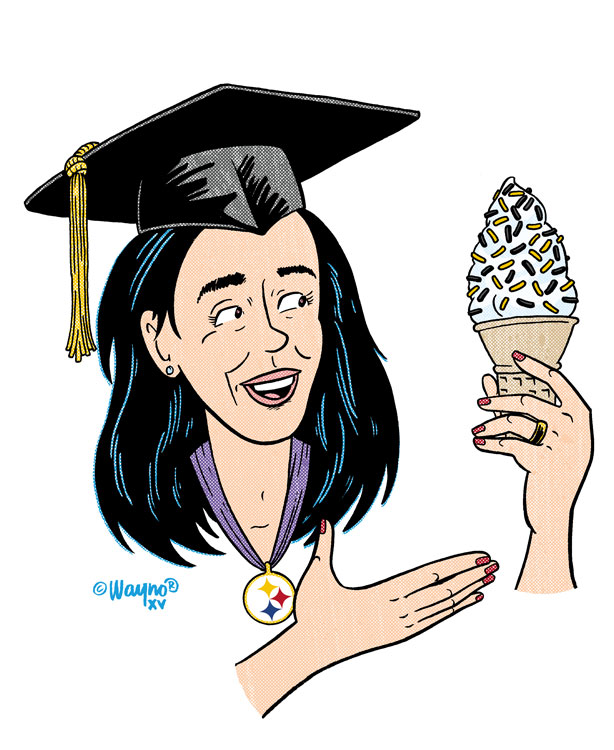 After 20 years of living in East Texas — a God-forsaken piece of this country where bugs are the size of peaches and venomous snakes form street gangs, where tornados munch on houses and where the summers make you say things such as, “Gosh dern tootin’ it’s slightly less hell-like out here today, ma!” — my sister Marcia and her family have relocated to Pittsburgh.

(I’m going to pause for a moment to give you a chance to say, “Marcia, Marcia, Marcia!” in the voice of Jan Brady.)

Having been out of Pittsburgh for two decades, my sister will need to be reacquainted with her city. And having lived their whole lives in that pit of despair called Texas, her husband and children are going to have to start with Pittsburgh 101.

Lucky for them, I just awarded myself a Ph.D. in Pittsburgh with a master’s in Yinzer. Class is in session.

Driving in Pittsburgh is … interesting. We don’t have the wide-open spaces of that flat piece of hell from which you came. We have landforms and rivers and valleys that forced city planners to get creative with our infrastructure.

Do learn the “back ways,” or you’ll sit on the Parkway East thinking murderous thoughts while your gray hairs have a grow-party. Do learn to drive in the snow. Don’t come to a stop on an icy road if at all possible. Do expect to be given the Pittsburgh Left, and do take it. Don’t feel obligated to give it.

Do try out the alternative ways to get around the city, such as Autopods, pedicabs, inclines, bike-sharing, ride-hailing or the T. Don’t expect to find plentiful public transportation for all of your needs. Don’t ever ask anyone where you can hail a cab unless you like to be laughed at.

Do realize that at merge points on downtown bridges, everyone in the left lane will need to get to the right lane and vice versa. Do be aggressive to get to where you need to be, but do be kind and let others get there, too.

Do not ask for directions unless you want to learn where 20 things USED to be.

Do not, no matter what — not if you have a bathroom emergency, not if you’re late to your kid’s music recital, not even if President Obama is waiting for you to introduce him to a crowd of international leaders and the Son of God — ever move a parking chair.

Sports are to Pittsburgh as a mother’s spit is to a 4-year-old’s cowlick … it holds us together. It’s a common ground in a city that sometimes could do better to remember that, despite differences, we all are humans.

Do expect to see the wave circling about, and do expect people to complain bitterly about it. Do feel free to take part in it anyway. Do leave early if you must. Don’t leave JUST to beat the traffic … like Dad.

Do not shout, “Shoot it!” “Hit it!” or “Throw it!” Do scream, “YOU’RE A FILTHY CHEATER, BRADY, AND I HOPE YOU GET MALE-PATTERN BALDNESS!”

Do boo every Ryan Braun plate appearance as if he personally wronged you. Do learn who T.C. Congdon is. Do boo any opposing pitcher who attempts a first-base pick-off. And for the love of God, DO. NOT. “WOO.” I’ll ship you back to Texas myself. Third-class. With a holey box of bees.

Do feel free to wear black-and-gold gear to church. Don’t wave a Terrible Towel at church; have some class.

Do teach your kids to call bullies “jagoffs.” Do learn what jimmies are. Do feel free to drop “to be” from your sentences — because who has time for grammatically unnecessary words, n’at?

Do learn that while Texas has two seasons, “hot as hell” and “kinda chilly out,” Pittsburgh has four … three of them are too long and one of them feels as if it’s only three days in October. Do plan a tropical getaway for mid-February lest you become so mentally unhinged you’re standing outside trying to punch snowflakes out of the air.

Most importantly, regardless of whether you heed any other advice in this column, do expect this vibrant city and its down-to-earth people to embrace you and your heart exactly as hard as you embrace them.

This article appears in the August 2015 issue of Pittsburgh Magazine.
Categories: From the Magazine, Hot Reads, PittGirl