It only takes one person, one jagoff, one childish, attention-seeking, discourteous jerk to send a woo through PNC Park. 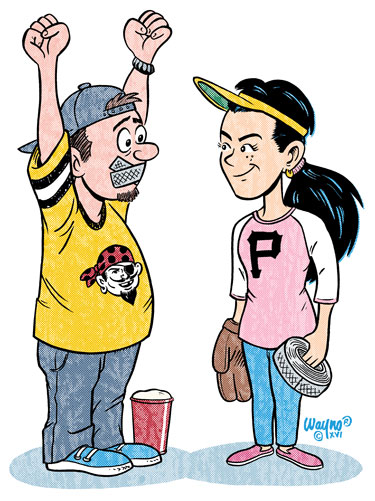 There are certain sounds the human eardrum would reject with a roundhouse kick if it only had the wee legs to do so.

Nails on a chalkboard.

The distant sound of your kid puking in his bed.

The disgusting phonology of the words “moist” and “phlegm.”

Still, I’d rather hear my kid scraping his nails on a chalkboard while night-puking and screaming “moist phlegm” at the top of his lungs than hear one single “woo!” reverberate through PNC Park.

Borne of Mephistopheles in the white-hot sulfuric flames of Beelzebub’s hell, the woo was popularized by beloved professional wrestler “The Nature Boy” Ric Flair. If you’re not a wrestling fan but you’ve watched a baseball game at (or simply televised from) PNC Park, you’ve heard the woo. The course it took to PNC Park is unclear, having originated at live wrestling events and then popping up elsewhere — probably next at Pittsburgh Penguins games, where it mostly has vanished — in the early 2010s. However it arrived, it’s become inescapable.

It comes not at the height of game action. Not during applause, cheering or any other time fans exhort their team. No, the woo lurks like a slithering demon-serpent. Waiting. Festering like the audiological pimple it is — until the park goes quiet.

Until there is a lull.

Until there is a beautiful moment of serenity while a pitcher warms up or as a batter takes a few practice swings before entering the box.

Then, with its invasiveness ensured, it erupts and disturbs the calm quiet of our beloved pastime.

It only takes one person, one jagoff, one childish, attention-seeking, discourteous jerk to send a woo through the park. It’s unleashed at a frequency that cannot be ignored. It blasts through your eardrums and starts punching your brain.

If you’re watching the game at home, the woo drowns out the sound of the televised commentators. It makes your dog lose his mind with frantic barks, as if to say, “WHAT HOLY HELL HAVE YOU UNLEASHED?! I WILL PEE ON EVERYTHING YOU LOVE.” You’re forced to watch the game on mute. Even the radio broadcast is invaded by the woo.

Wooers say, “I’m just cheering for my team! Being a fan! Go watch golf if you want quiet.”

Please allow me a moment to unload all of the crap you just loaded onto the truth wagon.

You aren’t cheering for your team. If you were, you would be applauding and hollering during the good, along with the rest of the stadium. You would be groaning and booing with the bad. Wooing during lulls in the game is a grab at attention. You aren’t saying, “I love this team and that play was AMAZING!” You are saying, “Hey! Look at me! Listen to how annoying a sound I can make! It’s all about me! WOO!” You are no different from a toddler screaming “POOP!” while cart-riding in Target.

Baseball isn’t meant to be quiet. In fact, PNC Park has become one of the loudest places in which I have ever watched a sporting event. The famed Cueto chant was so loud I nearly passed out at the game. It was a thing of beauty. It was about the team. It was about the fans joining together to make an impact. It wasn’t about one person.

Wooing is all about you — and whatever element is missing from your life that you can only try to fill via the attention gained from basically farting into a bullhorn.

It should never be all about you. Nor should it be about your ability to annoy as many people as you can simply because you bought a ticket and a few beers and possess the desire to unleash a modern-day Tarzan call to show us what a virile man you are.

I’m using the term “man” loosely. Roberto was a man; you are a selfish attention-suck.

So what shall we, the non-wooers, do? I’ll tell you. You rip this page out of the magazine or print it out. Fold it up and tuck it into your pocket before heading to the game. Then when you encounter a wooer, you spend an inning evil-eyeing that demon. Wait until he heads for the concession stand.

Hand him this column.

And before you walk away, say, “Not today, Satan. Not today.”

This article appears in the June 2016 issue of Pittsburgh Magazine.
Categories: From the Magazine, Hot Reads, PittGirl