Thanks to her husband believing in "happy wife, happy life," PittGirl has the perfect wine to celebrate the Pirates' ultimate victory. 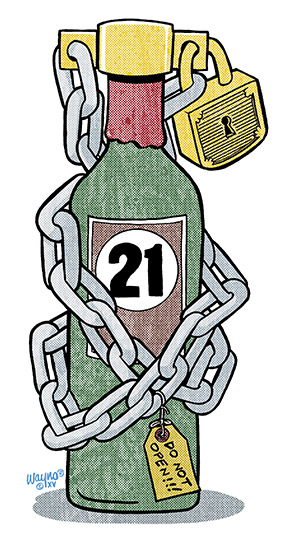 There’s a corked bottle of wine that I keep in the drawer of the liquor cabinet in my dining room. I know what you’re thinking … “classy.”

I don’t have a wine rack on account of if I have a bottle of wine, I drink the wine. Because wine is delicious, and I have children and a writing career — two things that occasionally drive me to drink. I’m never housing corked wine bottles long enough to “let them age,” let alone have the need to store them horizontally. I’ve been told vertical storage is a no-no that will ruin the cork, and then one day you’re drinking wine with cork bits in it, which still is quite drinkable. It’s just crunchy wine. “Nutty with a grainy texture and a hint of silt,” is how a sommelier would describe it.

The particular bottle of wine in the drawer of the liquor cabinet, however, is special — it’s a 2009 Clemente Cabernet from Engine House 25 Wines at the Roberto Clemente Museum. Wine that you need to make an appointment to buy. Wine that benefits the legacy of one of Pittsburgh’s most-cherished icons. A friend gifted it to my husband on the occasion of his 40th birthday party.

I immediately took possession of the bottle because my marriage is a lasting marriage on account of two phrases I often repeat to my husband: “Happy wife; happy life” and “What’s yours is mine, and what’s mine is mine.” (Incidentally, those are the two phrases that someday will be etched onto his and my headstones, respectively.)

So in accordance with those marriage principles, that bottle of wine became Mine.

I decided then and there on Oct. 23, 2012 — not long after the Pirates had clinched their 20th consecutive losing season — that the bottle of wine would stay corked. It would not become “Mom’s grown-up purple happy juice” when the kids were at each other’s throats over such important conflicts as who is breathing too loudly near whom. Nor would it become “Mom’s three-weeks-past-deadline liquid muse.”

Lesser bottles of wine could serve those purposes; this bottle is tucked into the drawer where it clunkily rolls around each time a placemat is retrieved. A noisy reminder that it exists. It’s ready. It’s waiting.

For the Pittsburgh Pirates to win the World Series.

Now, had I written that back in 2012 when I first made the oath on the wine, you would have looked at me much like my son looks at me when I try to explain dial-up Internet to him — a mixture of bewilderment, pity and barely concealed mirth because, “Yo, this lady is nuts.”

But here on the cusp of the 2015 season, you’re looking at me as if to say, “Man, I wish I had a bottle of wine that I tucked away two-and-a-half years ago to roll around in MY placemat drawer.”

You don’t pity me. You aren’t bewildered by my hopefulness in the face of daunting odds. You aren’t laughing at me, except when I use my written words intentionally to manipulate you into doing so. (Dance, my puppets. Dance!)

You realize that you actually might see the Pirates win a pennant. In fact, you don’t choke on the word “pennant” in the way you used to when it was used in such proximity to the word “Pirates.”

And that, my friends, is what the start of baseball season is.

It is hope. It is the melting away of the harshness and brutality of winter. It is a true dawn. The clearing of gray to reveal the lush green and vivid blue. January might be the start of a new year, but it doesn’t bring hope or the feeling of “anything can happen here in the sun.”

And, boy, you spend enough Februarys in Pittsburgh and you kind of understand why sun worship once was a thing. Because yes, let’s indeed bow down to this giant ball of fire that will give winter an atomic wedgie and a swift punt in the backside.

Everything about baseball feels … upward. Positive. The leisurely pace of the game. The warmth. The sounds. The smells. The simplicity. The history as America’s pastime.

And that is why I had hope back in 2012. I knew what was around the bend. Spring. Green. Growth. A chance. So I tucked that bottle into the drawer until such a time as the hope might be rewarded.

I don’t know if this will be the year. Or next year. Or 10 years from now. But maybe you should find a bottle to tuck away, too.

Then, one day, we can all drink our placemat-drawer wine together, cork bits and all.

This article appears in the April 2015 issue of Pittsburgh Magazine.
Categories: From the Magazine, Hot Reads, PittGirl