For now, she suggests critics take the "Seinfeld" approach. 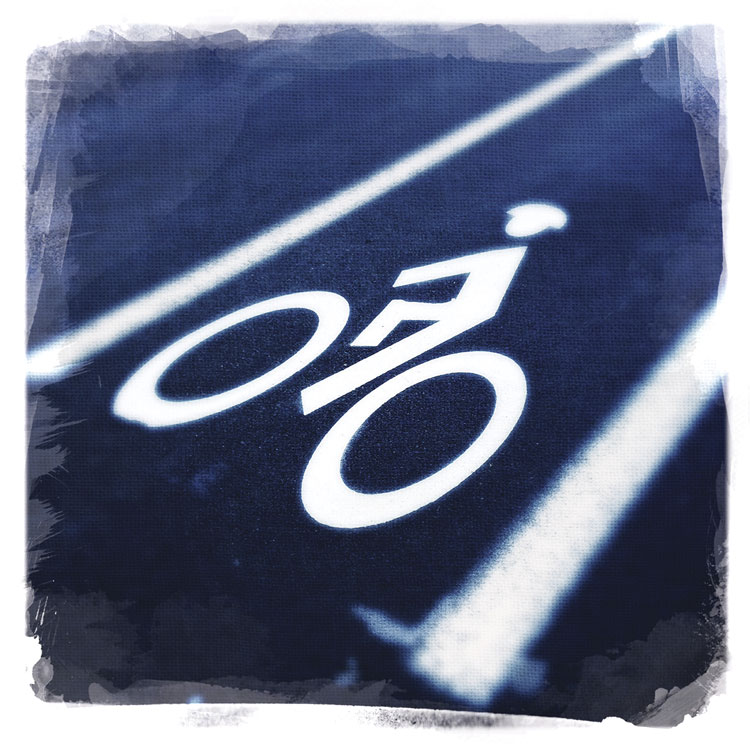 If you want to have a real poop-stirring conversation with a ’Burgher that culminates with you screaming "yo mama" insults at the top of your lungs while passersby film you for viral Vines, there are a few topics I can recommend:

Let's talk about that last one, and let's try not to let the conversation devolve into “yo mama.”

But let's talk about bike lanes.

When that stretch of Penn Avenue downtown was converted this fall to a bike lane, there was lots of anger because Pittsburgh is a car town, not a bus town nor a subway town nor a year-round bike town … and we are definitely not a Segway town, Portland. We love our gas-sucking, air-polluting hunks of metal. And now we have one fewer place to drive them.

Is anyone even really going to use it? asked many others.

This is Pittsburgh. Bike-commuting season is like four months long. What a waste, said more.

I am not a cyclist. I'm terrible at it. I’m unsteady. I feel a sense of panic if my toes can't touch the ground while I'm seated. A few years ago I was biking with my sister in Texas, and an old lady hit me with her giant Buick. She was going 6 miles an hour when she drove so close to me that she caused me to lean and fall against her car, but I'm still going to say she hit me. SHE HIT ME. And I've taken a Calvin approach to biking ever since.

And you know all about my inner-ear issue. It's why I can't balance on one foot, carry a tune or parallel park. Shut up, all of yinz. Yo mama!

So, not being a cyclist, it's hard for me to really care much about biking lanes or to defend their existence.

Recently, Roberto Clemente's bridge became bike-friendly via two bike lanes. Again, the poop hit the fan with all the same questions being asked: Who will use this? Will they use it enough to justify it?

Eric Heyl at the Pittsburgh Tribune-Review wrote an opinion piece on the lack of usage of the Penn Avenue bike lane, and he and I began tweeting a bit about the issue. My view was: Let's be patient. Let's give it some time to gain usage.

And suddenly, Mayor Bill Peduto slid into my DMs like …

(You won't get that if you're not on Twitter, but trust me, I made a funny joke just now. Laugh, puppets.) 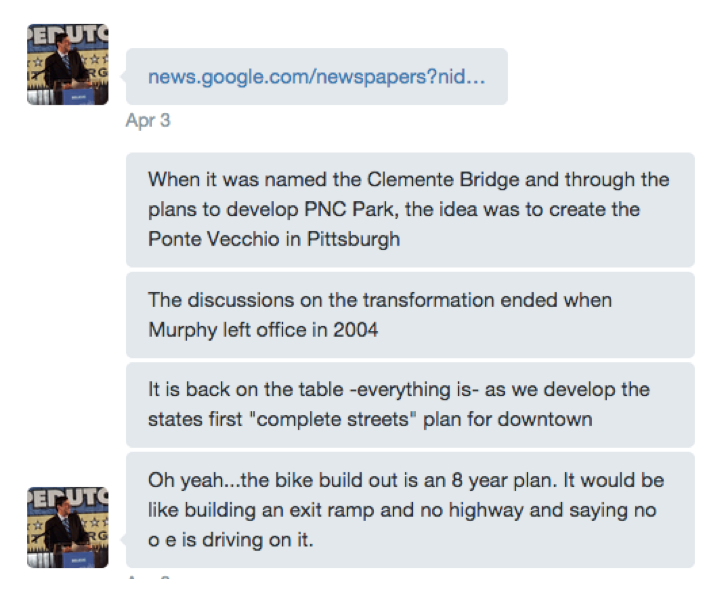 Everything I've learned about Bill Peduto's term as mayor indicates that he makes decisions, whenever possible, based on data. In fact:

He's a fan of smart cities and complete streets, and I've researched those things to be sure I agree with what he's planning for Pittsburgh … because otherwise, I might need to reopen the Office of That's Church in the Market Square Dunkin' Donuts.

It has been very weird for me to be a fan of the mayor's because me and Lukey so rarely were on the same page. We weren't even in the same chapter. Or the same book. Hell, I was in “Pride and Prejudice” and he was in “The Complete Far Side.”

This is why I'm so slow to criticize the bike lanes. Because I know they've got to be part of a bigger plan. A plan formed from lots of data showing the good that will result.

In our conversation, the mayor told me to research “complete streets,” and being the teacher’s pet that I am, I was like, “ALREADY DONE, WHERE IS MY GOLD STAR?!” But Ponte Vecchio? No clue. Here’s the article the mayor linked to from a 1998 story in the Pittsburgh Post-Gazette regarding the renaming of the Sixth Street Bridge: 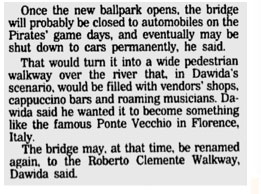 I went to research the Ponte Vecchio and, LOOK AT THIS! 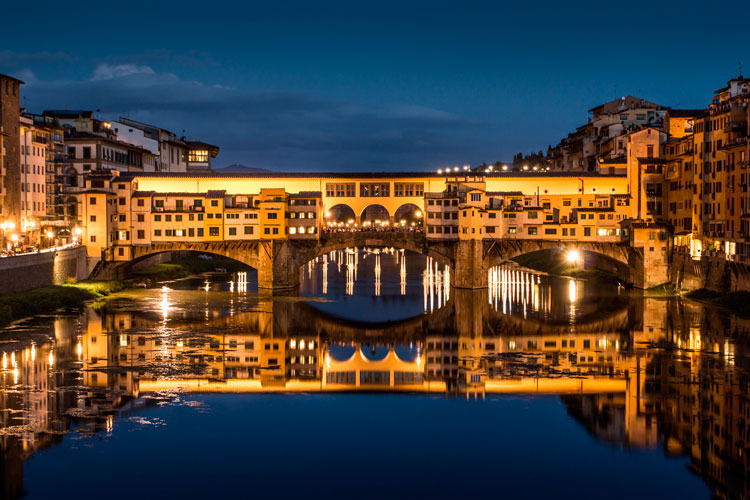 And it's all back on the table. He isn't making promises, and it may not happen, but could you imagine if it did? This stunning bridge becoming even more stunning? An iconic tourist destination within the city?

I am on board, and I’m going to work on my bicycling and Italian skills so that maybe one day I can bike down Pittsburgh’s Ponte Clemente with a handlebar-basket full of flowers all, “Bella giornata, vicini di casa! Ho un orecchio interno orribile!” (I hope Google Translate got that right.)

Let’s be patient. Let’s take the Seinfeld approach. Let’s give the bike lanes a chance to become something before we start demanding they be removed.

This article appears in the April 2015 issue of PittGirl.
Categories: PittGirl