Our former Zima enthusiast is ready to get her drink on - for real this time. 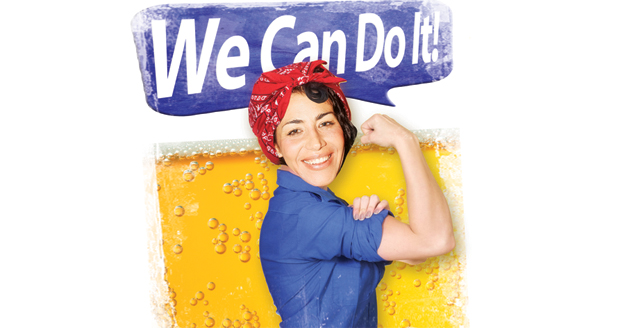 By the time I admitted on my former blog (“The Burgh Blog”) that I was an enthusiastic imbiber of the clear malt beverage Zima, it was already long past the glory days of the oft-mocked illegitimate child of the trailer-park of beer-wannabes.

If craft beer were the Mercedes of alcoholic drinks, and Bud Light the Yugo, Zima would be the three-legged, geriatric mule with one good eye. Don’t flaunt it in the street; hide it in your garage, and pray no one ever sees you near it.

I was never ashamed of my love of Zima, but one person’s purchasing power cannot effectively keep an alcoholic beverage on the market. So when it was announced a few years ago that Zima would cease production, I threw a little funeral for my soon-to-be deceased three-legged mule.

I began the hunt for the new Zima in my life, hopefully one with at least four legs—if not an engine.

When I discovered Bud Light Lime, I thought I had taken a step up from the shame of being a Zima drinker, but I was quickly put in my place by craft beer enthusiasts who informed me that I graduated to what they considered to be, well (putting it nicely), the liquid evacuated from the equestrian bladder.

But beer, to me, was beer. I didn’t care what color it was, where it was brewed or what any of the words on the label meant (Stout? So, it’s a short, fat beer?). To me it was all the same. Just like there are really only two kinds of wine: red and white. (I can practically HEAR the local sommeliers falling over themselves to get the first hand on my cheek to slap some sense into me.)

Bud Light Lime, brewed inside of an icy mountain, the commercials would have me believe, was a nice citrus beer-flavored beer that often found a place in my fridge during hot summer months. Also, this beer would make me thinner, more attractive and blonde. Commercials don’t lie.

After years of local craft-beer enthusiasts begging me to allow them to educate me about brews made in smaller batches and how they differ from the mass-produced horse pee I’d been drinking, I finally gave in and met up with Douglas Derda from the popular local podcast “Should I Drink That?” We met one late afternoon at Bocktown Beer and Grill in Robinson Township. With 400 beers and a staff that knows the local and regional brews, it was the perfect place to learn.

Doug instructed our craft-smart server to bring us six samples of the regional beers they had on tap that day. Lined up on the table in front of me, I realized that beer might not just come in beer flavor. Each glass was a vastly different shade of brown. We started with Troeg’s Sunshine Pils (Harrisburg, Pa.). I sipped. I looked at Doug. He told me to let it breathe. I sipped again. Let it breathe. Looked at Doug. “Doug, this is beer-flavored beer.”

Doug agreed that this beer was the closest to the beers I had been drinking my whole life, as many pilsners tend to be indistinguishable. We agreed this is a good beer to drink after tennis. What? Don’t you drink beer after tennis? Try it.

Doug assured me that as we moved along, the beers would begin to differentiate from the Bud Lights and the Rolling Rocks. Bring on Marzoni’s Stone Mason Stout (Duncansville, Pa.). The short, fat beer. Not really. Stout beer, I could see, was very dark and … Do I smell COFFEE IN THIS BEER, DOUG?

Doug, knowing what a coffee addict I am, was pleased to inform me that most stout beers taste like coffee. I grabbed the glass, sniffed, sipped, let it breathe and said, “Ohhhhhhh,” as the dawn of beer enlightenment entered and the shame of Bud Light Lime left.

This enlightenment was only short-lived because it would be followed by the euphoria of Bocktown’s Brewser’s Infusion of Rock Bottom Breakman’s Stout with Kahlua-Soaked Oak Chips and Vanilla Bean.  I did mental math. Coffee + Kahlua + Vanilla Bean = DIED AND GONE TO BEER HEAVEN.

I drank it down like I had just played a five-setter. Suddenly, I was a beer expert. I started tossing around words like smooth, bitter, weight and, at one point, “yowza.”

We breezed through Marzoni’s Belgian Style Pale Ale, which I declared my least favorite on account of the fact that I just drank a vanilla Kahlua coffee-flavored beer.

By the time I was sipping an East End Fat Gary (Pittsburgh, Pa.), I knew everything about beer and was wisely nodding my head at whatever Doug was teaching me about hops while letting my beer breathe, sensing the gravity of it in my mouth.

I left my time with Doug sobered up, educated and armed with the knowledge that craft beers are anything but beer-flavored. The very next evening at Pittsburgh magazine‘s Best Restaurants Party, I found myself at the bar choosing between a domestic beer and a craft beer. Also, wine—red and white. I chose a craft beer: Lancaster Strawberry Wheat Beer (Lancaster, Pa.).

I have found my new Zima, and this one is my Lamborghini. Hands off.

This article appears in the August 2011 issue of Pittsburgh Magazine.
Categories: From the Magazine, PittGirl