PittGirl: A Feminist with Killer Shoes, Hear Her Rawr

PittGirl takes a history lesson in feminism, prompted by her daughter's love of dinosaurs. 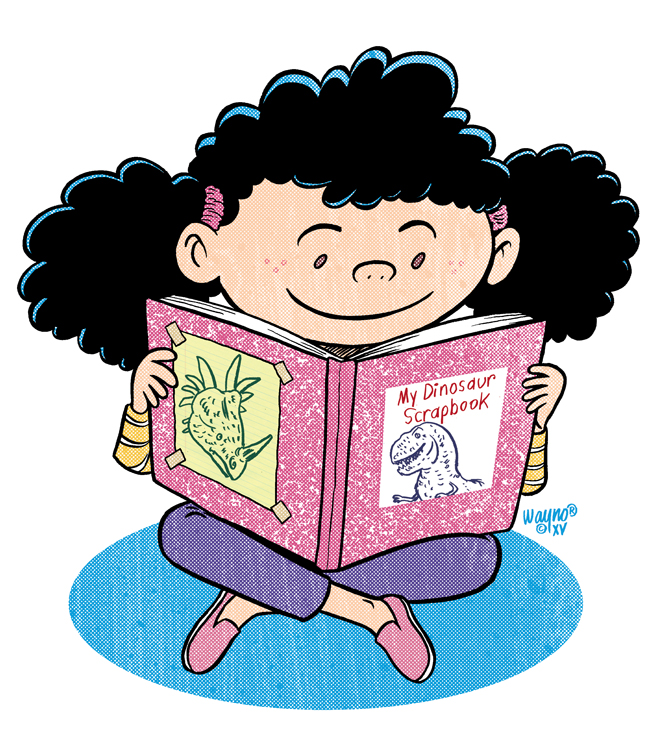 I’m not a feminist.

That’s what I told myself.

To me, a feminist was a woman with hairy legs rivaled only by armpits that appeared as if she had Cosmo Kramer in a permanent headlock. She nurtured an almost militant sense of entitlement. Her entire shoe collection consisted of three pairs of Birkenstocks … all brown. She eschewed makeup, deodorant, tweezers and any jewelry that didn’t pay tribute to Venus or the female reproductive system.

I believed feminists were angered by men offering seats on a bus or — God forbid — holding a door open for them. I appreciate such gestures, and these radicals were stomping on chivalry with their ugly rubber sandals that suggest the first rudimentary footwear the monkeys will create once they evolve enough.

I’d see the images of Beyonce performing in front of the word “feminist,” spelled out in towering letters and I’d say, “Ugh. We get it, Beyonce. If that is your REAL name.”

Now you’re fuming. I’ve dissed Queen Bey. I must pay and dearly so.

Well, relax: You don’t have to teach me a lesson. Life and history did it for you. So simmer down and enjoy my transition from misguided, self-proclaimed non-feminist to … whatever you want to label me when you’ve reached the end of my column.

I felt the first stirrings of an internal shift with the birth of the local Hollaback! movement, which aims to stop street harassment. I never was bothered when men made comments to me as I walked by because I never stopped to wonder if what they were doing was OK. I just accepted it. Then one day I thought, “Wait, why CAN’T I walk the sidewalks without staring at the ground for fear of making accidental eye contact, which might encourage a comment? Why IS this OK? Maybe … it’s actually not.”

And then my daughter … oh, this child. From an incredibly early age, she gravitated toward her brother’s toys. She had no desire to play with dolls, and the only princess movies she would agree to watch were “Mulan” and “Pocahontas.” “Cinderella?” Ugh. “Sleeping Beauty?” As if. Belle, who tames and falls in love with a fanged, hulking, angry animal-man who wears a cape like some kind of misunderstood superhero? Ew, no.

She’s 8, and she is wholeheartedly dedicated to dinosaurs. She knows their names, time periods, eating habits and behaviors. She’s called “weird,” and she’s been told her dinosaurs are “stupid” by her female peers.

Thus continued my gradual internal shift. This love of prehistory and science should be encouraged and nurtured, not ridiculed. Girls love dinos, too! And dragons and frogs and bugs! Why don’t they make dinosaur clothes for girls? Why do adults at the playground give her odd looks when she’s happily holding a stuffed apatosaurus instead of an American Girl doll? Why are we ridiculing girls who love science and then questioning why they lag behind the boys in that very subject when they’re older?

Then I started to research strong women in Pittsburgh’s past. I forwent the usual names (Sophie Masloff, Rachel Carson) and focused on the lesser-knowns. I delved into the stories of incredible Pittsburgh women such as the staunchly religious Jane Grey Swisshelm, who started newspapers solely to fight for women’s rights and the abolition of slavery.

Nellie Bly, who was one of the first ever to argue for equal pay.

Edith Dennison Darlington Ammon, who, on behalf of the Daughters of the American Revolution, fought against Henry Clay Frick to preserve the Fort Pitt Block House. Who stood before a group of state senators and did not back down one inch, scolding, “Have you no history? Have you no pride?”

I read about their fights and their steadfastness as some men, and even some women, continually tried to trample on the rights and power they were trying to claim for themselves as equals … rights and power I might not have today if they hadn’t succeeded. After four hours of research, I was ready to stand up, flip the table I was working at, punch a defiant fist in the air and go out and vote for something or maybe buy some property.

Now I know. I can wear my heels and makeup. I can appreciate when a man holds the door for me and I can thank him. I can shave my legs and pits. I can be feminine. At the same time, I can and must want for my gender, for my daughter, every right, freedom, power, esteem, wage, valuation and opportunity afforded to the boys and men of America.

I am feminist with killer shoes; hear me rawr.

This article appears in the July 2015 issue of Pittsburgh Magazine.
Categories: From the Magazine, Hot Reads, PittGirl