The university is redeveloping the former Quality Inn & Suites in Oakland into non-student apartments — and adding a grocery store. 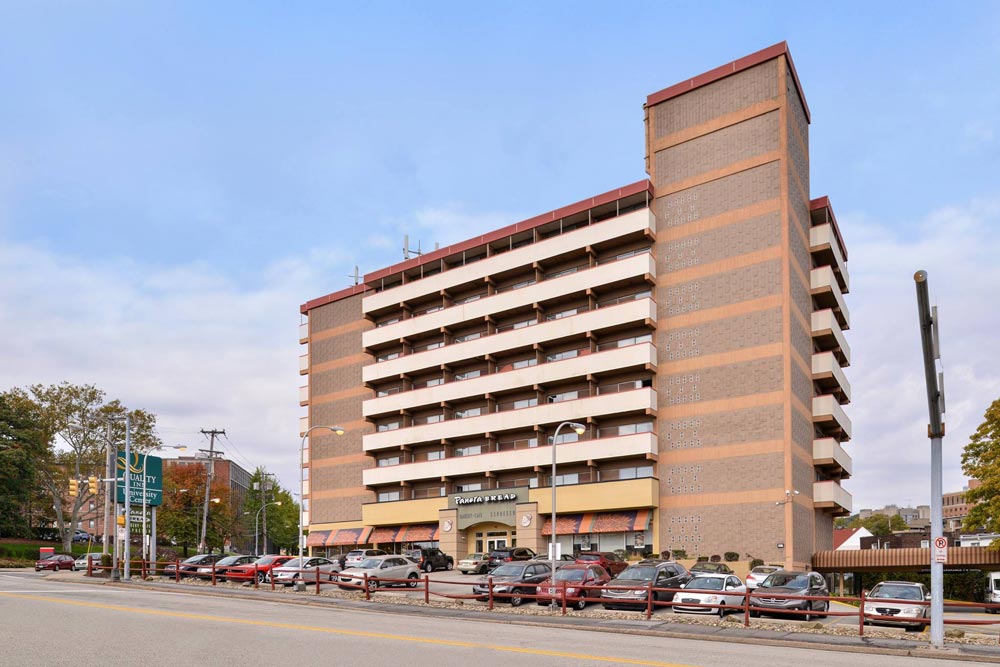 For years, Oakland residents have expressed a desire for more housing options, as well as a grocery store — and now that wish is being granted.

The University of Pittsburgh recently announced plans to redevelop the former Quality Inn & Suites along the Boulevard of the Allies into non-student housing. The hotel closed last year during the COVID-19 pandemic, and there are no plans to reopen it. There also are plans to incorporate a grocery store into the site, which currently houses a Panera Bread. It is undecided if the restaurant will remain open.

University officials say they made the decision based on community feedback gathered in its Institutional Master Plan, a 444-page document dedicated to improving the Pitt community for students and residents.

“In nearly every conversation the University of Pittsburgh has had with Oakland residents about Pitt’s presence in the neighborhood, the same two items — a grocery store and more resident housing — came up as priorities,” says Lina Dostilio, Pitt’s associate vice chancellor for community engagement, in a recent press release. “It was obvious there was a need, and we are excited to partner with our community to help realize these long-desired amenities.”

Pitt officials see redeveloping the building as an opportunity for new walk-to-work options for University of Pittsburgh staff and other workers in Oakland, as well as enabling them to take root in the community, according to the press release.

The Oakland Planning and Development Corporation also announced it’s selling property at 233-237 Atwood St. to Pitt. According to the press release, as part of sale negotiations, Pitt has committed to “promoting homeownership and creating opportunities for staff and faculty to live in Oakland neighborhoods.”

Following what the university says was a competitive search process, Pitt is collaborating with Shadyside developer Walnut Capital on the hotel-to-apartment conversion. The developer is also partnering with the university for the redevelopment of the rowhouses bounded by Bates Street, Boulevard of the Allies and Zulema Street. More details regarding plans for the rowhouses, including a construction date, have not been revealed.

“The University of Pittsburgh is really stepping up as a partner in the neighborhood,” says Pittsburgh City Council member Bruce Kraus, who represents the neighborhood. “The site is a critical connection between central Oakland, South Oakland and Oakcliffe, and our neighbors have wanted non-student housing and a grocery store — along with removing the blighted townhouses on Bates — for a long time, and Pitt is getting it done. This is a huge step for Oakland.”

This project is truly catalytic,” she says. “It creates an exciting new corridor into Oakland and is the product of an authentic and ongoing partnership among the University of Pittsburgh, the city of Pittsburgh and our neighbors.”