The decision comes after a lengthy and deliberate search, Pitt says. 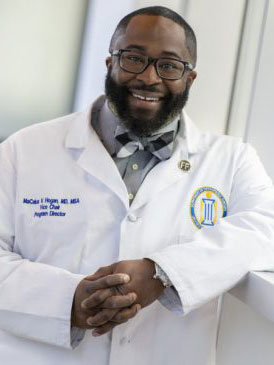 The University of Pittsburgh has named its new chair of the Department of Orthopaedic Surgery —  an individual tasked with replacing the “irreplaceable” Dr. Freddie Fu.

Dr. MaCalus V. Hogan was named the new David Silver Professor and Chair of Pitt’s Department of Orthopaedic Surgery and Chair of Orthopaedic Surgery at UPMC, following a thoughtful, yearlong national search to succeed Dr. Fu, whose legacy as department chair from 1998 to 2021 attained a stellar international reputation for leading key scientific and clinical innovations.

Dr. Fu, who was named the 2021 Pittsburgher of the Year by Pittsburgh Magazine,  died from metastatic melanoma in September 2021.

“After a lengthy and very deliberate selection process, Dr. Hogan was clearly the preferred choice to not only build upon Dr. Fu’s legacy, but also lead the department into new territories for the future,” said Dr. Anantha Shekhar, Pitt’s senior vice chancellor for the health sciences and John and Gertrude Petersen dean of Pitt’s School of Medicine, in a statement. “His commitment to building a diverse environment at Pitt/UPMC and growing the academic excellence in musculoskeletal research made him the ideal next chair.”

Dr. Hogan was recruited by Dr. Fu in 2013. He is the founder and director of the Foot and Ankle Injury Research group at Pitt, and he serves as a foot and ankle consultant for the athletic departments at multiple area universities including Pitt, Carnegie Mellon, Duquesne and Robert Morris.

Dr. Hogan also serves as the foot and ankle consultant for the Pittsburgh Steelers and the Pittsburgh Penguins as part of the UPMC Sports Medicine Institute.

He was selected as a “Top Doctor” in orthopaedic surgery for 2022 by Castle Connelly, which was published by Pittsburgh Magazine, and has received similar accolades annually since 2016. And, UPMC says, his body of work precedes him: Dr. Hogan has authored more than 250 manuscripts, book chapters and abstracts and frequently presents both nationally and internationally on his management of foot and ankle injuries, regenerative bioengineering, clinical outcomes research and health care delivery transformation.

“I am honored to take on this leadership role and look forward to taking UPMC and Pitt orthopaedics to the next level,” Dr. Hogan said in a statement.

He added that he’s excited to get to work in his new role and further UPMC’s mission — and Dr. Fu’s legacy — of providing innovative and cutting-edge care.