New General Manager Ben Cherington likes what he sees in Pittsburgh and thinks he can make a difference. But nobody in the new-look Buccos' front office is talking about increasing the payroll. And in Pittsburgh, it’ll always come back to that until it doesn’t. 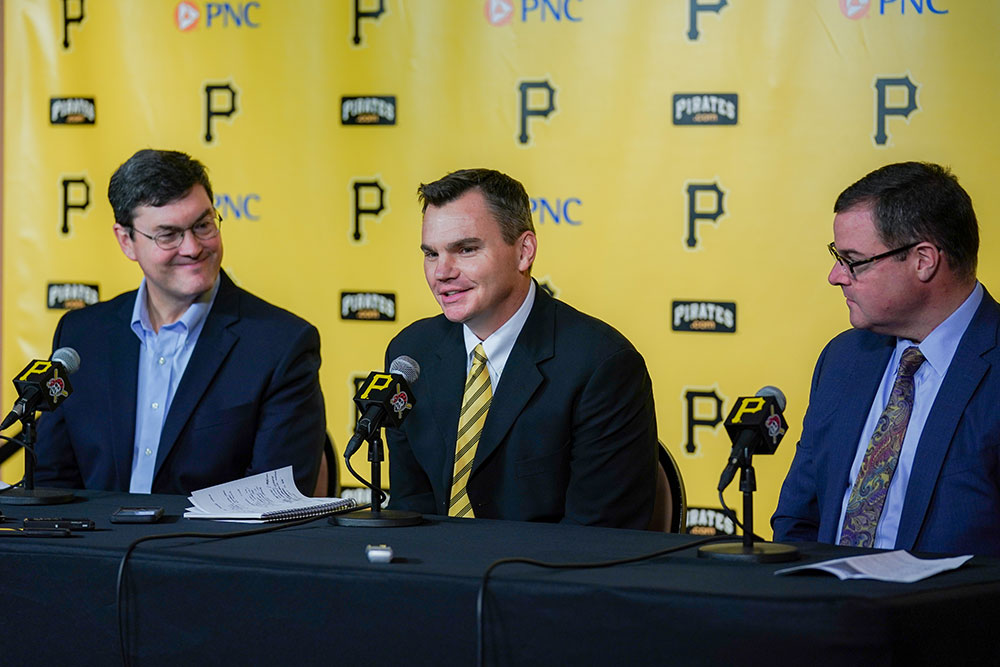 The Pirates were in hard-sell mode again this week; you could tell because they kept talking about the fans.

Ben Cherington: “I know how much this team means to the people of Pittsburgh.”

That was the old owner, the new team president and the new general manager in rapid-fire succession on Monday afternoon at PNC Park, almost on cue.

So the Pirates are that far ahead of the game as they begin again.

They’re also better off, unquestionably, with Williams and Cherington in the offices formerly occupied by Frank Coonelly and Neal Huntington, as they will be, presumably, when Cherington gets around to hiring a replacement for Clint Hurdle.

The old guard had its moments, but their viability had clearly run its course.

They should bring fresher ideas and insights and a renewed vigor to their duties.

But, like Huntington and Hurdle, they’ll only be able to do so much under the self-imposed restraints of Nutting’s purse strings.

The way around those is what Huntington and Hurdle stumbled upon from 2013-15: Latch onto a few under-valued veterans, either through low-risk trades or low-budget free agency, who wind up out-performing their perceived usefulness, hope a number of young players develop simultaneously, perhaps get a career year out of your best player, and coax overachievement through inspired leadership.

That happened here briefly, and not all that long ago (it only seems like decades), but that’s doing it the hard way in baseball.

The more conventional way is to spend to industry standards in an industry that doesn’t have a salary cap.

That doesn’t guarantee annual trips to the postseason, but it makes it a hell of a lot easier to get their from here.

Williams cited “the Rays, the A’s, Brewers, Astros, to a certain level,” as teams that have “cracked the code.” All four of those teams qualified for the postseason last season, and only one of them, the Astros, did it with a top-five payroll.

In Pittsburgh, it’s always going to come back to that until if and when Williams, Cherington and the manager-to-be-named-later change the narrative.

“Everybody wants to put Pittsburgh in that small-market basket and say it’s too challenged to be able to win,” Williams said. “I don’t believe that’s the case.”

Perhaps not, but that didn’t stop Cherington from referencing “a place like this” and a “place like Pittsburgh” while opining about the organization he’d just joined and the challenges confronting him.

This from a guy who had previously worked for and won with the Red Sox.

Wonder if he ever referenced Boston as “a place like this” for context within the market?

I swear I could hear the echo of Michael Keaton maintaining “somebody’s gotta write a check” right about then.

“I was able to look at an entire investment and resources available to baseball, including the major league team, the major league team payroll,” Cherington continued. “And I feel very confident in that level of investment and the resources available, committed to those areas, and  in some specific areas probably towards the lead in the industry in some areas.

“So feel really good about that, but equally as good about the personal and emotional commitment that Bob and Travis have to this team and this city. And I would argue that’s just as important. I feel very confident, I wouldn’t be sitting here today, I wouldn’t have taken the job without that level of confidence.”

Cherington sounded like he was selling himself at that moment.

Because if he really is counting on a personal and emotional commitment from Nutting, the new gig is going to be a lot harder than the new GM has initially envisioned.