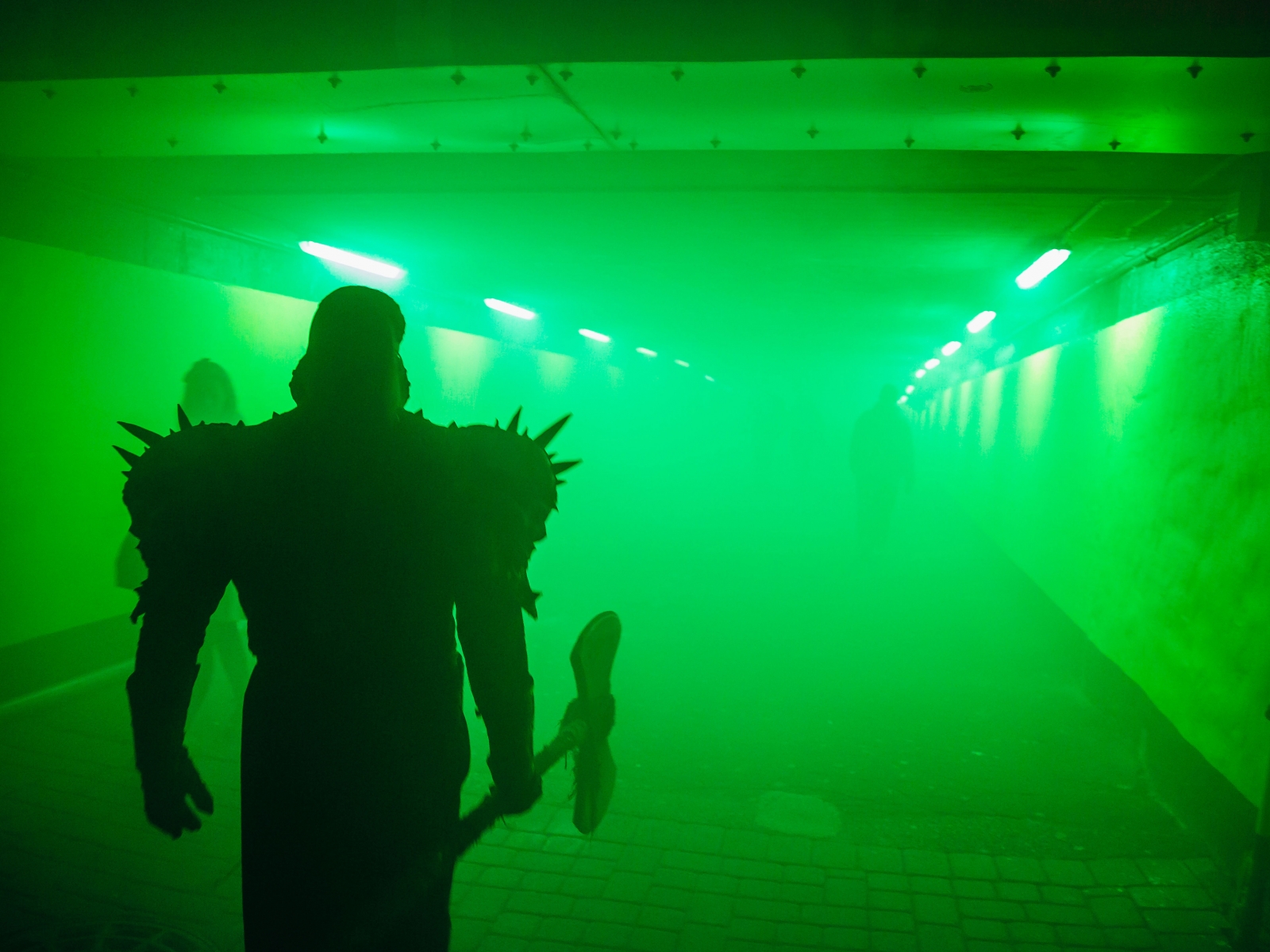 Before you even enter the park, you’ll know why you came to Kennywood for Phantom Fright Nights.

The park’s entry tunnel is an icon of its own — the prelude to those lasting Kennywood memories. When you approach on an October evening however, the portal has turned sinister. Eerie light fights thick, choking fog to illuminate even the slightest corner. Costumed creatures stalk you from within the mist. At the far end, an imposing figure wielding a larger-than-life axe guards the entrance to the park.

Within a few paces, you realize what’s going on tonight. Kennywood got creepy — and it’s awesome.

The best part of Phantom Fright Nights is finding the thousand tiny ways the landmark park’s charm is inverted, turned to the (playfully) wicked. The dark carnival trope is a well-worn cultural touchstone for a reason: When the free-spirited fun of an amusement park is given a shadow behind its eyes, it’s the exact sort of creepy you can’t resist.

You’ll stroll through the park, with stretches of pavement converted into scenes of supernatural chaos. There are rides running, yes, but many are operating in total darkness; picture diving down the hills of the Phantom’s Revenge unable to see where you’re going, or being tossed around the turns of the Exterminator without any idea which twist lies ahead.

Oh yeah — then there are the haunted houses.

Phantom Fright Nights would be a more-than-worthy way to spend your autumn evenings without the addition of any spookhouses, but these old-school, walk-through haunts make it essential. This year features seven such attractions; while some are better than others, the best of them have become iconic Kennywood experiences in their own right.

Atop the list of can’t-miss spots: Voodoo Bayou, a Creole maze with plenty of swampy flair. Going with a New Orleans vibe is always a solid choice for a haunted attraction (Hundred Acres Manor has a quality Cajun section of its own), but Kennywood’s Bayou is also the coolest bit of behind-the-scenes access you’ll get all year. The course takes you through the drained track of the Raging Rapids, an uncanny sight all on its own.

I’d also recommend the Kennyville Cemetery, a pleasant graveyard stroll, and the Haunted Ark, which is … pretty much just Noah’s Ark with some extra-creepy touches. (The ride was spooky to begin with, after all.) If you’re up for a somewhat atypical experience, track down the Dark Shadows haunt (no relation to the TV show), which is the darkest maze of the lot; you’ll be thoroughly disoriented as you struggle to find the next turn.

If lines get long, you can probably skip Villa of the Vampire — good atmosphere, not enough action — and Mortem Manor, which has its charms but is in need of a makeover. If you want to hit every haunt, an RIP pass is a good move; there’s a variety of price points, but you can add front-of-the-line access to each haunt for $20. I’m often skeptical of buying a fast-pass when you’re going to a single-entry haunted house (you can stand to wait in one line), but when you’re at an attraction with repeated queues, it can make a big difference in your evening. (Note: Kennywood provided Pittsburgh Magazine with such access for the purpose of this post.)

When you need a seat, head for the park’s 4-D theater for a 13-minute version of the 2009 reboot of “Friday the 13th,” with plenty of gory surprises when Jason nabs a camper — but be warned, this feature is not for the faint of heart. And, to answer your most pressing question, yes, the Potato Patch is open throughout the evening.

Even if you merely wandered the uncanny version of Kennywood Park, however, you’d have an unforgettable evening. The way the mist and low light creeps over the rides, the way the screams from atop the coasters pierce the night, the dark corridors and hazy scenes — where better for a October evening?

Plus: Have you ever seen Thomas the Tank Engine grinning out at you through the darkness? Terrifying.