More brides are using social media to enhance their wedding days, so we’re sharing a few tips to help you do the same. 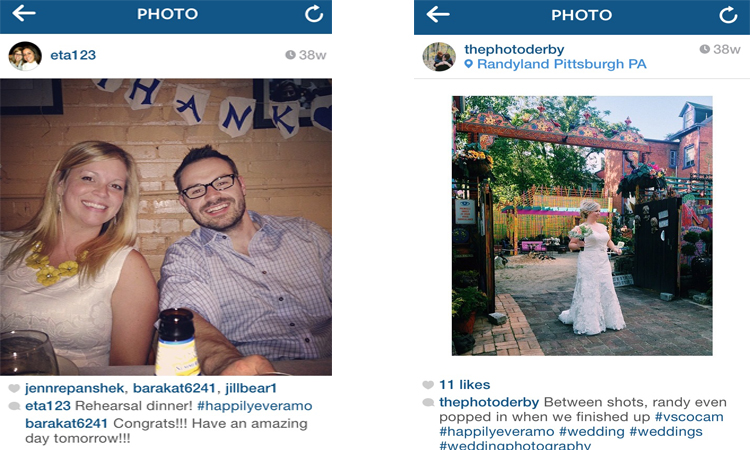 Meredith Matthews works in public relations and uses social media every day — including her wedding day. When she married Sean Amoroso on May 31, 2014 at the Pittsburgh Opera, she asked guests to use the hashtag #HappilyEverAmo to tag pictures of the event.

“Amo” refers to a shortening of the couple’s now-shared last name, which also serves as Sean’s nickname. Happily Ever After fit the theme of the couple’s wedding: Meredith used romantic movie and book quotes as decorations for her own fairy tale.

Meredith says it’s possible for a bride to miss certain moments of her special day when she’s trying to ensure that everything goes smoothly. By using a hashtag, Meredith and her groom were able to look back and see details of their event as seen through the eyes of friends and family.

“We would have loved to see more, but people were dancing around and having a good time,” she says.

Meredith hosted a mostly young crowd — the majority of her guests were in their 30s, but some were her parents’ age. She says there was a clear divide between the age groups’ preference of social-media outlet. Most of the guests who were Meredith and Sean’s age used the hashtag on Instagram and Twitter, while older guests used Facebook exclusively.

She advises brides to make a wedding hashtag short and obvious so that even guests who aren’t very familiar with the realm of social media can use it.
Heather Herrington, owner of Flawless Execution Events in Lawrenceville, encourages her brides who choose to incorporate social media to create a one-of-a-kind hashtag well before the big day.

“Try to make sure that your hashtag is unique as early as possible,” she advises.

Meredith admits that she wishes she had printed her hashtag in more places for guests to see. Her guests posted more pictures from the reception than from the ceremony because the hashtag was not printed on the ceremony programs, but it was featured on signs throughout the reception venue.

Ashley Broskey, owner of AB Occasion Design in Washington, Pa., recommends including a wedding hashtag on each place setting or along with each favor. During cocktail hour, guests have time to read about the process and take a moment to post a picture.

Broskey also advises brides and members of bridal parties to begin using their wedding hashtag during events leading up to the wedding so that guests will see it in use and follow suit. 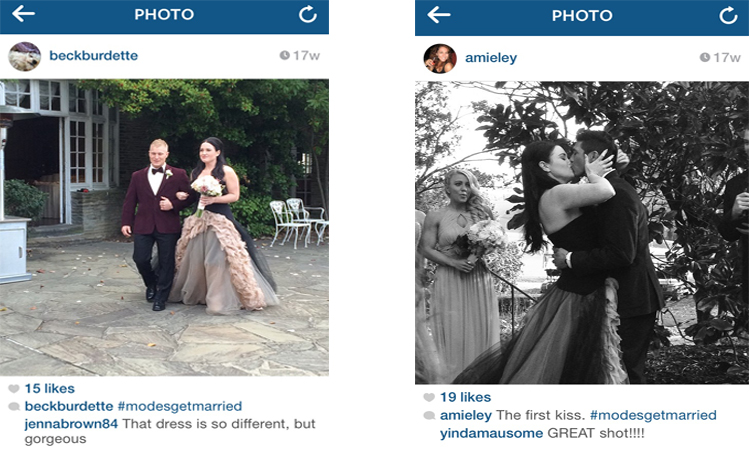 ​Jaymie Hill started using her wedding hashtag, #ModesGetMarried, as early as her bridal shower and her shared bachelorette and bachelor weekend. When she married Jonas Rubiano on Oct. 25, 2014 at Longue Vue Club, her groom’s nickname, “Flip Mode,” inspired their hashtag. When the couple began dating, they collectively became known as “the Modes.”

Jaymie says people asked what her hashtag would be just as they would ask typical questions about plans for her dress or flowers.

“About 70 percent of our attendees were on the younger side. Most people were expecting a hashtag,” Jaymie says.

​Jaymie and Jonas looked through Instagram photos marked with their hashtag the day after their wedding.

“We had so much fun at our wedding. We just wanted to relive it,” Jaymie says.
Herrington notes that pulling pictures from social media gives brides access to more candid pictures of their event.

“If you have everyone at your wedding acting as a photographer, you’re obviously going to capture things the photographer might not get,” she says.
Jaymie used her iPhone to take screenshots of guest photos she liked. Later, she cropped and printed them. She found one of her favorite photos — a shot of herself and her groom smiling at the altar — on Instagram.

“If it wasn’t for the hashtag, I don’t know if I would have found that picture,” she says.

​Broskey adds that Pinterest and DIY wedding trends have made the use of social media more important to brides.

“Posting pictures lets people see all the hard work that went into your event,” she says.