Unlike its film-soaked neighboring holidays, Thanksgiving only requires a viewing of “Planes, Trains & Automobiles.” 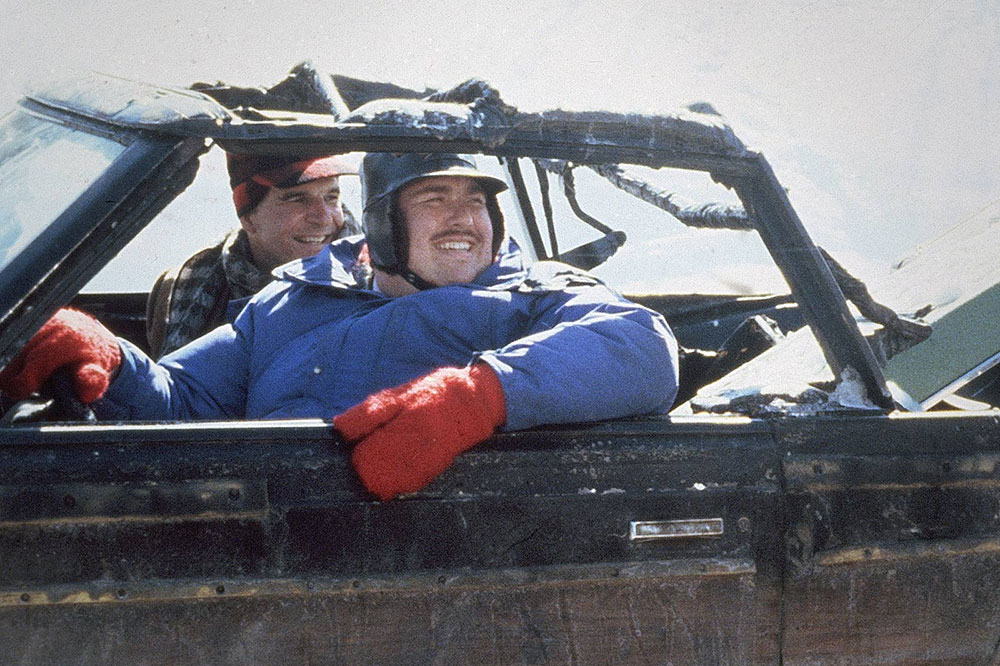 As the yuletide season continues its inexorable transition to a two-month mode of existence, the movies are keeping pace. Christmas movies were once a narrow subset of drama (“It’s a Wonderful Life”), comedy (“National Lampoon’s Christmas Vacation”), and action (yes, Virginia, “Die Hard” is a Christmas movie).

Now, seasonal narratives are becoming a full genre, as the script elves at the Hallmark Channel wave an enchanted candy cane over a small New England town and manifest a brand-new tale of love by the tree every three hours.

We have long since given up on restraining Christmas to its traditional starting point, Thanksgiving; the tinsel-drenched holiday’s armies have advanced all the way to Halloween, flipping skeletons to snowmen on Nov. 1. As a result, the minuscule roster of Thanksgiving movies is unlikely to expand; by the time the turkeys are served, many families have already explored the special features on their Blu-rays of “Love Actually.”

That’s fine. We only need one Thanksgiving movie: “Planes, Trains and Automobiles.”

I know that there are other movies dedicated to November’s most gluttonous holiday. “Home for the Holidays,” “Free Birds” and — blessedly — “Addams Family Values” have their adherents. I was also recently introduced to the low-budget, Thanksgiving-set, ’80s slasher, “Blood Rage.” (Tagline: “That isn’t cranberry sauce.”) But, while Christmas movies can and should occupy different genres and tones, only “Planes, Trains and Automobiles” is actually necessary for Thanksgiving.

It handles the holiday so perfectly that nothing else is needed.

I’m going to spoil the film, which does have a late-game twist; if, somehow, you haven’t seen it, go watch it now. (I envy the discovery you’re about to make.) You can rent it for a couple of bucks through Amazon, Google, iTunes or most anywhere else.

Written and directed by hitmaker John Hughes — by the way, in a somewhat controversial opinion, this is Hughes’ best film by a mile — “Planes, Trains & Automobiles” follows the transcontinental odyssey Neal Page (Steve Martin) must endure to make it home to his family for Thanksgiving dinner. His journey occurs alongside Del Griffith (John Candy), a bumbling-yet-lovable oaf whom Page keeps running into during the early stages of the journey.

As a series of calamities pushes the pair farther from their destination, “Planes, Trains & Automobiles” hides its hand, mostly existing as a comedy master class. Martin’s turn as the exasperated straight man is one of the best ever captured on film; Page is an inexhaustible font of rage and exasperation, eminently relatable and still just surly enough to serve as an occasional punching bag. Candy, meanwhile, is the only performer who could’ve nailed this part so thoroughly; he’s goofy, charming and clever in every scene.

When the pair finally arrive back in Chicago, sometime around noon on Thanksgiving Day, the big reveal arrives: Del doesn’t have a home to return to. His beloved wife died three years ago. He was happy to accompany Neal on his journey, but now, he’s headed for another motel to continue his existence as an itinerant traveling salesman.

There’s a much longer version of “Planes, Trains & Automobiles” that has never seen the light of day. (If you’re on Twitter, we’re trying to get #ReleaseTheHughesCut trending.) Its script, however, can be tracked down — including an excised scene after the reveal, where Del explains his nomadic lifestyle to Neil.

“I number about 300 motels as my home,” Del explains. “I sort of attach myself to people from time to time. Like with you. Especially around the holidays. I can take it in March, July, October. I don’t mind it. But it gets hard about this time of year. I’ve never had much of a chance to be a family man, but it gets really hard … I don’t get to give of myself to anybody. It’s not the getting I miss, it’s the giving.

“I vowed I’d never burden anybody with this. And I broke my vow, held you away from your family. Caused you a hell of a lot of trouble. You’d better run.”

Neal, of course, brings Del home for Thanksgiving dinner. But this is where the lesson of “Planes, Trains & Automobiles” lies — in Del’s sad circumstances and his endurance of them. It’s easy to read this movie as another reminder that home is where the heart is, make more time for your loved ones, hold your family tight.

That’s not what “Planes, Trains & Automobiles” is about. It’s about remembering that your reality, and your troubles, are not universal — and they can be endured.

For days, Neal bemoans his sad state, mourning that he’s missed days with his family under one roof and his daughter’s Thanksgiving pageant. All the while, Del is drifting through the world alone.

For me, that’s not a reminder that other people have it worse — we get enough of those. The point of the film is that Del is not an angry, miserable drifter, furious at having been cheated by life. He’s happy, confident and comfortable. He struggles with all he’s lost but genuinely bounces back every day.

This year, many of us are angry about what we can’t have. We’re preparing for Thanksgivings spent away from family, as we cook individual meals to avoid spreading a deadly disease to those closest to us. It’s easy to complain about this state of affairs — to rail against the idea that we must sacrifice our holiday, or to rage at the reckless behavior throughout the year that made the current state of the pandemic so dire.

Those families will shed tears, remember those they’ve lost and, yes, probably have a moment of anger. But then, they will cut the turkey, pour the wine and celebrate with the people still living under their roof. In the midst of the most serious global pandemic in history, they will find moments of joy.

Like Del Griffith, they will endure, find another motel and hope for someone to talk to along the way.