Perspectives: What President McKinley Reminded Me About the Joys of Travel

In this part of the country, you can pretty much go anywhere and likely discover fun surprises. 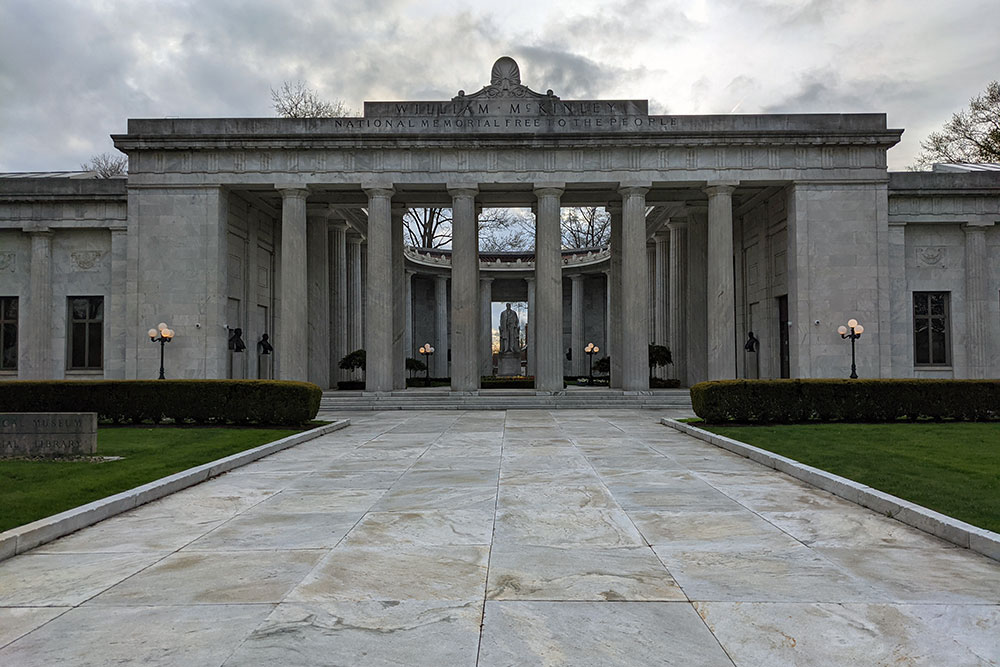 I was driving through the nearby part of Ohio last weekend — as with nearly all of my recent trips, I was bound for a drive-in movie theater — when I passed the exit for the small town of Niles. Below the plain sign announcing the town, there was an even smaller sign that read: “President McKinley National Memorial.”

I’ll admit to having spent very little time thinking about William McKinley, at least since what I’m sure was an illuminating portion of my 10th-grade history curriculum. Even after assuming he was an Ohioan, though, I was incredulous — could an actual, full-on presidential memorial be hidden in this tiny corner of the Buckeye state? (And be simply announced by a very underwhelming sign? Really: I’ve seen infinitely more elaborate road signs announcing the presence of a candle outlet.)

With some time to spare, I took the Niles exit and followed a series of increasingly unremarkable signs for about 15 minutes. On a ho-hum street in Niles — a stretch that might’ve been found in any number of square-mile, Appalachian towns — there is, indeed, a stately and somber memorial to the nation’s 25th president. 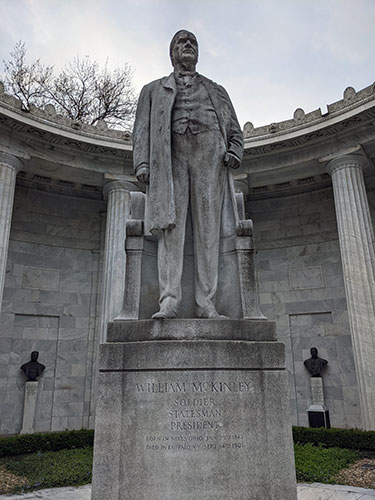 The memorial mostly consists of an outdoor statue garden, where an imposing marble McKinley is surrounded by busts of some of his cabinet members and political allies. There’s a small library and a smaller museum — the former not open when I arrived, the latter still offline due to the pandemic — but the whole affair takes up about half a block. (And not a Manhattan block, either. A Niles block.)

Other than the presence of a McKinley Laundromat and McKinley Bowling Alley a few miles up the road, this is about all the hoopla Niles affords the former commander-in-chief. Later, I looked up the answers to some of my more pressing questions, chief among them: Is this really the full and complete memorial to a fairly big-deal president (one who, in case you need a refresher, was assassinated)?

No, it’s not. There’s a much larger memorial, along with the proper Presidential Library and Museum, in nearby Canton; the site that I discovered is a secondary monument marking McKinley’s birthplace. Apparently, Ohioans were convinced that McKinley would emerge as a Mount Rushmore-level President and went big on the statues to get ahead of the historical curve. (There’s a big one in Columbus, too.) And, while the somewhat humble size of the Niles example is odd, the state is coated with presidential remembrances; seven were born in Ohio.

The experience was mildly edifying, at best, about the former POTUS. It served as a much more full reminder, however, of a travel truism: There is interesting stuff to see pretty much everywhere.

Now that I’m vaccinated, I’m beginning to think of traveling again. I’ve barely left the city since the beginning of the pandemic — again, almost exclusively for drive-ins — and I am of course fantasizing about proper vacations involving air travel and far-off destinations.

As we get back into the habit of going places, though, it’s important to remember that we needn’t skip straight to Florida, California or Paris. The one semi-normal trip I took last summer was to St. Marys in Elk County — no one’s idea of a thriving travel destination. It was fantastic. We drove to nearby Benezette to watch elk roam over the hills; we drank outdoors at the Straub Brewery. We wandered through towns we would’ve otherwise never visited, finding history and hidden treasures.

In this part of the country, you can pretty much go anywhere and likely discover fun surprises. I also like to rely on Atlas Obscura, an ever-growing compendium of unusual destinations, for trips like these. One day last fall, we followed its advice and investigated Cascade Park in New Castle, the former site of a long-forgotten amusement park; we found the remains of roller-coaster tracks embedded in the woods and peered through the windows of the shuttered carousel building. On the way home, we took another note from the site, stopping in Mars, Butler County, to take pictures with a flying-saucer statue.

This kind of advice, I know, can slip into hackneyed aphorisms — “it’s not the destination, it’s the journey,” that sort of thing. I don’t think that’s really the point, though; the point is that none of us have any excuse to be bored. There is, to put it plainly, interesting stuff everywhere. As we venture out more and more this summer, we should be more open about where we look. There are presidents and spaceships in some unexpected places.