Perspectives: They Just Used Them To Go Everywhere

With the help of a neighbor, a resident of the South Side slopes learns the ropes about getting around. 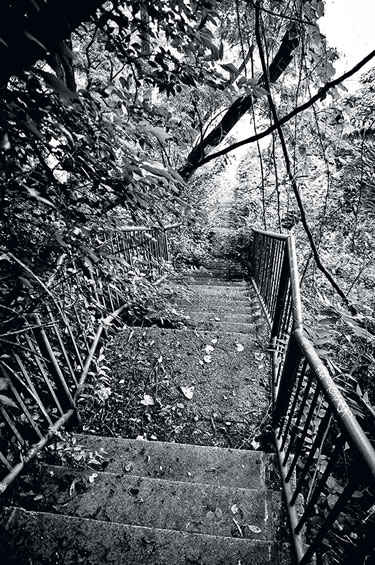 I bribe my across-the-street neighbor, Ed Waldo, with a homemade poppyseed cake and he agrees to come over and talk to me with my recorder on. He’s 80 years old, ornery and unsteady on his feet, so my husband Rick escorts him up the stairs from his house to the boardwalk and across Holt Street to our place on the South Side Slopes. Because Waldo’s home is on the river side of the street below the massive retaining wall, just to get from his door to the curb requires walking up a small flight of city steps. Once in the front door, a dog treat for my Yorkie, Bubby, magically appears in his hand. Bubby is a big Waldo fan. In good weather, Waldo (as he’s always been known) sat outside his house with a variety of dog treats for all of the Slopes dogs that pass on their daily walks.

Waldo was born and raised in the house he lived in, a bright pink, three-story home easily spotted from the Birmingham Bridge. He left for stints in Beechview and a raucous-sounding move to Florida, but after his mother died in 1990 he moved back. He strongly believed the spirits of both his mother and grandmother resided there with him.

He was a constant and natural storyteller equipped with a seemingly photographic memory. As we get him settled into a comfy chair, he’s ready to talk stairs. He also talks sausages, newspaper routes, killing chickens (and pigeons), driving a chicken delivery truck, dance halls, the mill, vintage cars and the Steelers.

Today, we talk about the crazy city staircases that surround us. Growing up, everyone in his family walked the steps. His mom, his dad, everyone in the neighborhood. “You’d have to,” he says, gesturing widely with his big hands. “They just used them to go everywhere. On Saturdays, my mom would say, ‘Let’s go,’ and we’d grab the empty shopping bags and we’d start going down and shop, and both of us would be carrying the shopping bags up.”

It was a walking community back then. Waldo can’t remember seeing more than four or five cars on our street, which is now packed nose-to-nose with them.

Not only did everyone know each other, they were also — I come to realize — pretty much related in one way or another. Most everyone — at least on our end of the Slopes — was Polish. “When I was a kid nobody spoke English up here,” Waldo says. “It was broken English. And the neighbors would talk to each other in Polish. … They used to call it Hunky Hill because everybody worked in the mill.”

People walked the steps, zipping up and down to work, to visit friends, neighbors, or the many small local businesses (now defunct) that lined the streets — candy stores, corner stores, bars, dance halls, a tailor — were just a staircase or two up, down or over. There were as many small businesses up as down back then, which in my mind immediately gives the city steps of the past more purpose.

Waldo recites the stair routes he took to deliver his newspapers, from Holt Street up to Arlington. To him, this entire place was still very much alive with ghosts from his past. The place itself seems to be a member of Waldo’s family. When I ask him what he loves about living on the Slopes, he says with a laugh, “I’m stuck with it.”

It seems that I’m stuck with it too. In walking the city steps of my neighborhood, I’ve come to understand its history in a deeper, more exacting way. And in living on the Slopes we’ve become part of its history, too.

I remember a crazy winter morning in February 2010 when the snow had packed-in the entire city overnight. They called it Snowmagedden, and our street was plowed in, not out, for two weeks. That morning unveiled thigh-high snow drifts. Not one car could enter or leave our neighborhood. Rick and I strapped on our hiking packs and walked door to door through the crisp air, a bright blue sky for a backdrop. We took orders for bread, prescriptions, beer and whiskey for our elderly neighbors. Waldo wanted white bread and I insisted we buy him wheat, which didn’t go over well once we got back to his house. We hiked down to the Giant Eagle and stocked up, and then we walked back up the difficult staircases, delivering packages door to door. That Snowmagedden city step hike fit us into part of the larger Slopes’ story on our little street, part of Waldo’s repertoire, connecting us to generations who walked the stairs in the past and those who will come huffing up them in the future.

Sherrie Flick is a writer living in Pittsburgh. Her second short story collection, Thank Your Lucky Stars, was published in September by Autumn House Press.

This article appears in the January 2019 issue of Pittsburgh Magazine.
Categories: Collier’s Weekly, From the Magazine