A slightly overblown fear of bird attacks leads back to good advice: Keep your dog on a leash. 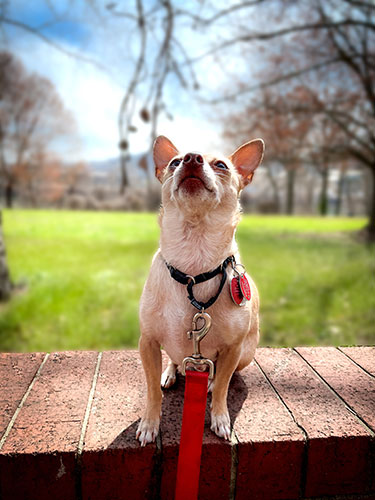 I spend a lot of time worrying that a bird is coming for my dog.

Peanut, our 11-pound chihuahua mix, is the first small dog I’ve shared a home with; before this tiny gentleman arrived, I hadn’t cared for anything smaller than a mid-sized terrier. On the second night after Peanut’s yuletide arrival, I was lying in bed, considering the finer points of two human/one dog sleeping arrangements, when my eyes snapped open.

While the threat of avian terrors descending from the wild blue yonder to abscond with household pets is overblown, it’s not out of the realm of possibility. While very few birds are large enough to actually carry a small dog, there are those that will attack a pooch under the right conditions.

Among the potential aggressors: red-tailed and Cooper’s hawks and great horned owls.

Our home, which clings onto the side of the South Side Slopes like a stray shoe sitting on a laundry pile, is surrounded by tall trees. I’ve spotted red-tailed hawks in most of those trees (and a peregrine falcon in one, though I don’t know if falcons are concerned with chihuahua mixes). As for great horned owls, they’re relatively common — and we know for a fact that a particularly quarrelsome owl is in the general area.

That’s to say nothing of the bald eagles, which make their home just a few miles downriver — in eagle terms, practically next door — and will shortly have hungry eaglets to feed.

I know that the odds of a brutal showdown between Peanut and one or more (they could team up, who knows) raptors is very unlikely; there are more than enough rodents and small birds around to feed our local, feathered air force. I can’t quite dispel my fears with that logic, though. No matter how unlikely the threat is, I’m not inclined to take the chance.

Solutions for this problem range from the folksy (reflective streamers, which disorient raptors) to the silly-yet-stylish (full-blown medieval armor). Yet there’s an even simpler solution: I’ll just keep Peanut on a leash.

Peanut, not one to frolic in the yard to begin with, doesn’t generally beg us for much time outside; he generally paces about, finds something intriguing to pee on and returns to the front door. (Outdoor spaces generally include very few armchairs, so Peanut isn’t interested.) While we might be tempted to open the door and let him take care of his business on his own, it’s not like the extra minute or two outside is taxing. We absolutely can leash him, walk around until he finds his spot and stop worrying about hawks and owls.

The broader point — and a more reasonable one than anything related to showdowns between chihuahuas and kill-crazy raptors — is this: The best, and easiest, way to be sure your pets are safe is just to keep them on their leashes. There are always voices that call for more freedom-first attitudes toward pet ownership — that dogs want to frolic and play. If you have a securely fenced-in yard (and a dog big enough to win a hawk fight), or are visiting a well-maintained dog park, have at it.

Otherwise, though, there’s an adage that applies: Your dog is well behaved until he isn’t. Your loyal pooch knows not to run away from you, until a rabbit dashes by, at which point your dog may well take off after it and dash straight into traffic. Your dog is friendly, until he playfully approaches a less-friendly dog and must respond to this stranger’s growls and bared teeth. Your dog comes when he’s called, until he tries to scamper up the wrong hill in Frick Park and takes a dangerous tumble.

A friend reported the other day that they had nearly been caught in the middle of a fight when an unleashed dog ran, full-speed, up to her husky while they walked in the park. The husky didn’t see this dog approaching and was petrified. Those scenarios can lead to a bloody fight, even between otherwise friendly dogs; moments of confusion and misunderstanding can quickly lead to injuries or worse.

It shouldn’t take a slightly overblown fear of angry owls to get you to leash your dog. Aside from safety concerns — and the fact that, y’know, it’s the law — it’s a courtesy to your neighbors, canine and human alike.

Besides: Did you see that video of the owl attacking the bald eagle? That owl is a madman. I’m not just worried for Peanut, I’m worried for me. That owl could take any of us out without a moment’s thought.

This article appears in the April 2021 issue of Pittsburgh Magazine.
Categories: Collier’s Weekly

Collier’s Weekly: Get Yourself a Gift This Week