A woman who grew up watching Mister Rogers’ Neighborhood recalls a magical encounter with one of the show's cast members. 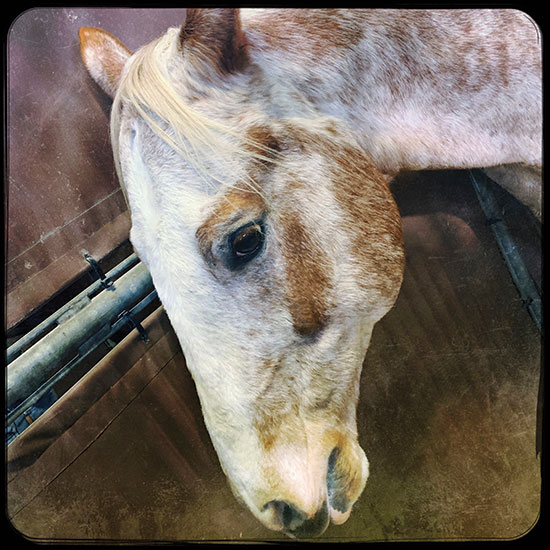 I grew up in a small town near Pittsburgh, home of WQED Studios. WQED was rightly famous for hosting the popular children’s television program “Mister Rogers’ Neighborhood,” centered on the fictional Neighborhood of Make-Believe. My favorite characters included Mrs. and Mr. McFeely, who ran the Speedy Delivery Service.

I devotedly watched Mister Rogers well into the third grade, which is perhaps why I’m the warm, emotionally centered person I am today. (Just saying.) A few years later, I would have no time for a man who wore sneakers and cardigans or for anyone who spoke that slowly. Instead, I fell in love with horses, reading books about horses and writing terribly predictable stories about horses. It became my new fictional world.

I met the McConnell family, who had a small riding stable located on 100 acres in the rolling hills of Indiana County, when I was in the sixth grade, and horses became, unexpectedly, my real world.

While still in my early teens, I began leading trail rides, and being in charge often pushed me well out of my comfort zone. I was a shy girl just beginning to develop a glimmer of self-confidence. I could handle horses, no problem — but when making small talk, especially with adults, I had zero game.

One day, Mrs. McConnell called and asked if I’d be available to lead an “all-day” ride, which meant 10-to-12-miles with a long lunch stop. My client was comfortable with horses, she said, but it was important to have someone along who knew the trails.

I nervously tacked up two good horses. Moments later, in walked “Mrs. McFeely,” and I was completely, wordlessly star-struck.

Betsy Nadas Seamans was an actress, producer and writer who worked in children’s programming in the early 1970s. In her 20s at the time, she had to disguise herself to play the mature role — but I easily recognized Mrs. McFeely, even without her tremulous, old woman’s voice and silver-haired wig.

I led her outside and over to the hitching rail. Taking a deep breath, I endeavored to make the all-day ride a pleasant experience for both of us. I had an assist from the impeccable fall weather, the sound of leaves crunching under our horses’ hooves, and the warm, Concord grape-scented air, a western Pennsylvania trifecta.

As the horses moved along, Betsy talked about the different hats she wore, sometimes writing episodes, sometimes acting, sometimes producing. But always working to create magical moments for children — moments I still remember.

Although I was young, Betsy didn’t talk down to me. From my perspective, and the rosy glasses of time past, we enjoyed a relaxed and engaging conversation. We tied the horses in the shade and walked toward the Big Oak, a venerable grandfather tree hundreds of years old. In the bright fall sunshine and the warmth of the day, we dined on our picnic lunch.

Lying on a horse blanket, staring up at a multitude of ancient branches, I experienced the realization that this was one of the first magical moments of my life — one of the early moments that let me know there might be more to come. It was a moment that marked my childhood’s end. A moment in which I moved irrevocably beyond “anything can happen in Make-Believe” and took the first steps toward believing that I could create my own reality.

I could choose to someday become a writer, an actor or a producer — or all three. Mrs. McFeely was a real person, not a puppet or a caricature. She was Betsy, with wavy hair and glasses and a voice entirely her own. She had a pretty good seat on a horse, a dry sense of humor and a wonderful laugh.

I recently happened upon a clip of Fred Rogers reading a short poem that captures a bit of what that day brought me.

Wendy Cohan is a fresh voice for women, writing about relationships, travel and humor. See more of her work on The Fine Line, Goalcast, Purple Clover and Medium.

This article appears in the May 2019 issue of Pittsburgh Magazine.
Categories: Collier’s Weekly, From the Magazine