Perspectives: Mourning Without a Road Map

A 30-year-old woman “who had lost her father too soon” learns the importance of following a plan when saying goodbye. 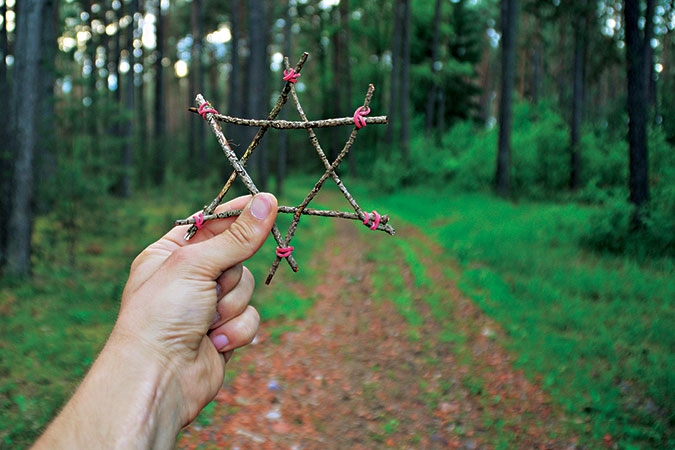 One of my earliest memories is being in a suburban Eat’n Park with my mom’s family. My grandmother — more at home on the golf course at the Duquesne Country Club than in a restaurant with paper napkins — was overdressed in a camel-colored mohair turtleneck. For years this memory seemed apocryphal.

It finally began to make sense years later, when, in my twenties, my mother and I started practicing our ritual of “cemetery tours.” We travelled on windy roads to place smooth rocks on the gravestones of our ancestors, a Jewish custom I’ve always known but never understood. The cemeteries were scattered throughout Pittsburgh’s northern suburbs. It’s land that was presumably rural when the city’s synagogues purchased the plots, but by the 2000s, we had to navigate housing developments and multiplexes to reach our loved one’s gated resting places.

Without the benefit of GPS, we relied on where we thought we should turn. We were never lost, but we took the “long way ’round” on more than one occasion. That day at Eat’n Park when I was 6, we must have stopped for a Smiley Cookie after my great-grandfather Max’s unveiling, the Jewish custom that marks one year since the burial of a loved one.

Judaism, like most cultures, has specific guidelines for those in mourning. How strictly one follows the rules is another matter, but even deeply secular people like me tend to follow the same roads. I have always leaned into the mourning rituals I was taught as a child. They are like old friends who have walked a difficult path before you and know when and where to turn.

But when my father died, I did not have the benefit of those old friends. A funeral was out of the question.

At the time, my dad was living alone in a rented one-bedroom apartment in Aspinwall. He was doing something akin to traveling paralegal work, something for which he did not seem qualified. (The lawyer he worked for was later disbarred.) I lived out of town, but my father’s life was bleeding into my own. I was his beloved daughter, his health care proxy, and someone whose identity he had assumed in pursuit of solvency.

In the weeks leading up to his hospitalization, I discovered he was hiding symptoms and the extent of his debt from me. A note I found in the trunk of his car, which doubled as his “office,” appeared to implicate my family in financial schemes we knew nothing about. I loved him dearly, but there were parts of him — large, scary parts — I barely knew. A funeral might further expose us to those parts.

Without the structure of mourning rituals, my grieving process seemed to take the long way ‘round. I went through the motions of my life but remained the fragile, confused mess of a 30-year-old who had lost her father too soon. I kept returning to the same sorrows with the same intensity. There were no familiar guideposts nudging me towards a time when I would still be bereaved, but no longer in mourning.

A rabbi I knew pointed out the importance of following a plan. He said the timeline of Jewish mourning was put in place for a reason, and if I followed the map there would be relief at the end. But most culturally approved maps don’t allow for the reality of loving and losing an addict.

Instead of the prescribed daily prayer, I was fending off angry intrusions. Where on the timeline of Jewish mourning was the call from the private investigator trying to collect on debts for her clients? Or the call from the hospital asking if I wanted to pay my father’s six-figure bill, not because I was required to (I wasn’t), but because it was “the right thing to do.” There wasn’t even an unveiling to attend. Instead of a marker we’d visit on a future cemetery tour, my father was cremated (his wishes), his ashes scattered out of town.

Jewish mourning rituals prescribe an end to the grief, but mourning without a road map, without a destination, means you never know when you’ve arrived.

Jamie Beth Cohen is a writer, storyteller and social justice organizer who works in higher education in Lancaster, Pa. She is a graduate of The Ellis School and studied writing at (the now defunct) Pennsylvania Governor’s School for the Arts. “Wasted Pretty,” her debut novel, will be published by Black Rose Writing in April. For more information, visit  jamiebethcohen.com.

This article appears in the November 2018 issue of Pittsburgh Magazine.
Categories: Collier’s Weekly, From the Magazine