Perspectives: Meeting Mister Rogers for the First Time in 2018

I never watched “Mister Rogers’ Neighborhood” as a child. Now I know what I was missing. 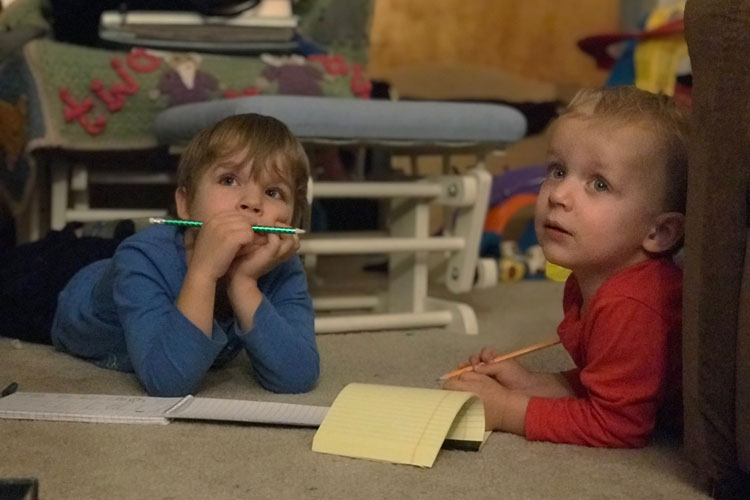 The Davidson boys are enthralled by an episode of "Mister Rogers' Neighborhood." Photo contributed.

A few years ago, my co-workers got me a Mister Rogers mug for my birthday. When you pour a hot drink inside, Mister Rogers’ jacket and tie turn into his iconic sweater.

I accepted the gift gratefully, happy as a writer with the beautiful quotes that adorn the mug and recognizing that Fred Rogers is a good guy to have on a mug when you work at a Pittsburgh-based magazine.

But I didn’t understand why those who saw my mug in our office kitchen got so excited when his outfit changed. Because I had never watched an episode of “Mister Rogers’ Neighborhood.”

But now, at 33 years old, I start every morning with one.

I have a 4-year-old and a 2-year-old, so I’ve recently become familiar with “Daniel Tiger’s Neighborhood.” I enjoyed the show as much as any parent enjoys a kid’s show, and I liked that it was teaching my sons how to close their eyes and “think of something happy” when they were afraid or how “when something is new, holding a hand can help you.” (Darn those songs are catchy.)

But when my husband noticed we had the option to add a PBS Kids subscription to our Amazon Prime account, he insisted we get it so we could watch “Mister Rogers’ Neighborhood.” He had grown up with it, and our kids should, too. He was so adamant about it — reliving the theme weeks and the special episode with the Hulk — that I agreed.

And now I get it.

I get the magic behind the man Pittsburgh Magazine voted “The No. 1 Pittsburgher of All Time.” I enjoy having his calming voice on the television as we start our day rather than a blaring cartoon with an obnoxious theme song. I understand the importance of Mister Rogers interacting directly with his audience, explaining big concepts to preschoolers just becoming aware of the larger world.

My sons and I have watched Mister Rogers visit Sea World, the Aviary, the trolley museum. We’ve watched his poolside talks with Officer Clemmons and his visits with famed jazz musicians the Marsalis family. Each morning when we watch, and often before bedtime, they’re exposed to people and places I never was — and they’re hometown people and places, and that makes it all the more special.

Being a Pittsburgher all my life, I’ve always known who Fred Rogers is. I understood he was an important cultural figure; I understood he was revered. I’ve interviewed numerous people throughout my career who knew him, worked on his show, passed him in the hallway at WQED, remember the time he stopped by their church for a special evening visit (that story is one of my favorites: “You’ve never seen a group of kids running and playing stop in their tracks so quickly as they did when Mister Rogers entered the room,” my friend relates). I believed people when they said, “He was as you saw him on TV. He was the real thing.”

Each time someone would tell me a story, I would nod with appreciation but never with real understanding. When I encountered Mr. McFeely out and about at various events, I knew I was in the presence of someone who was of great importance to this little television show, but I didn’t understand the magic of a Speedy Delivery or Picture Picture.

I finally asked my mother why I didn’t watch the show as a child, and she said she didn’t like it. The pace was “too slow,” she said.

Don’t worry, I too am concerned about her soul.

My heart warms when my 2-year-old, with his still-limited comprehension of the English language, calls out a request each night as I sing my sons to sleep. “Rogers song! Rogers song!” he’ll say. We go through, “Won’t You Be My Neighbor?” followed by, “It’s Such a Good Feeling,” the show’s closing song; the boys and I, all three of us, raise a hand for two snaps during the line, “I think I’ll make a snappy new day.”

We all love Mister Rogers now, me right along with them. And I’m so glad that I finally get it.

This article appears in the January 2019 issue of Pittsburgh Magazine.
Categories: Collier’s Weekly