A playground trip causes Amy Whipple, whose son has extra needs, to reflect on how simple — and charitable — it can be to make space for someone else. 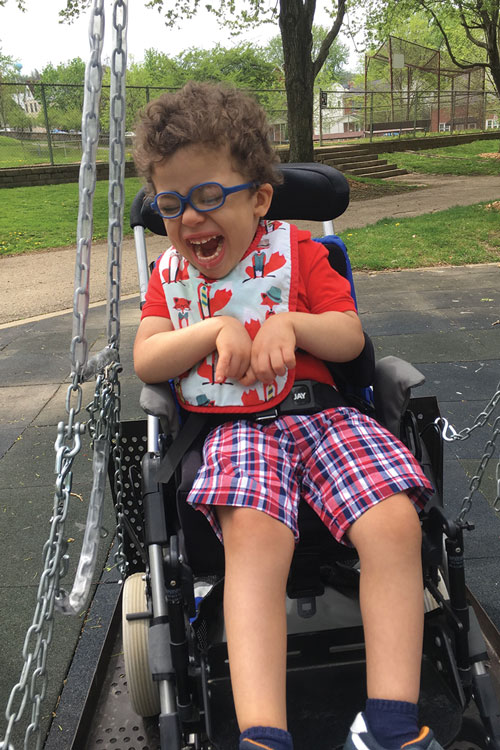 Lawrenceville’s Arsenal Park is thick with grill smoke and cheering voices one sunny Sunday afternoon. My 4-year-old son and I are walking past a kickball tournament, bound for the playground. For a second, I’m nervous when I see kids packed onto the wheelchair swing platform, commandeering it as if it were a Viking vessel.

The half-dozen kids hoist themselves over the swing’s chains. “How old is he?” asks a girl, and I ask their ages: 5, 6, 7. They want to know if they can help roll his chair onto the platform, why he uses the swing, if they can push, and how his feeding tube works. I ask about school and sports and tell them about cerebral palsy and to watch out for the platform’s sharp corners.

The kids stay long enough to see Wee Dude’s dimpled smile and then they’re off to the other swings or to scale the slides.

I continue to push WD and think about how different, and difficult, going to a playground was for us just a year ago.

Back then, WD started tightening his long legs when I put him in or pulled him out of the baby swings, leaving us dependent on another parent to get unstuck; my heart had hurt with sorrow and loneliness the day I knew our visits to the neighborhood playground were over. WD’s daycare teachers reported his delight in adaptive swings, which better supported his trunk. I wanted to be able to experience that with him.

We started driving to The Children’s Institute in Squirrel Hill, where I could latch WD into a wheelchair swing. It was a totally different experience.

In the wheelchair swing, WD smiled with his whole face. He’d laugh as the chains creaked and his sneakers tapped against my fingertips and the sun shone around us. The whole world might as well have been perfect.

In late 2017, then-City Councilman Dan Gilman proposed the installation of 91 adaptive swings and six wheelchair swings in 93 of Pittsburgh’s playgrounds. Gilman had earlier connected with Becky Mingo and Dutch MacDonald, a couple living in the East End who had suffered the unimaginable loss of two sons to a degenerative disease. The boys had loved adaptive swings, and their parents wanted to bring that joy to other families.

When I read about that, I cried. While the Americans with Disabilities Act has given us those now-familiar rubbery surfaces, it doesn’t mandate particular equipment. That is up to us.

It is up to us to say: You are worth including.

I recently came across a 2002 story in the Tribune-Review about the 100th anniversary of The Children’s Institute. The Institute was founded by socialite Mary Irwin Laughlin as a way to help then-5-year-old Emile Terronoire — who lost his legs in a train accident and whose widowed mother was unable to provide proper care — and other children like him to live and grow and thrive. The story quoted Terronoire’s daughter, Joan Ludchak: “Dad never thought of himself as crippled, and he never took a penny of charity.”

During the decade I’ve been living in Pittsburgh, I’ve become well aware of the city’s pride in both its friendliness and its independence. We take care of each other, yes, but it’s not charity — it’s simply what we do for one another. This is a city and a county that cares about its citizens, be it through one-on-one interactions, the government or the private sector. To help a parent dislodge a child from a swing. To make a playground accessible. Or to create a space that has served the community for more than 100 years.

After WD tires of the playground, I unhook his chair from the swing and we start walking home. When we get to a bend in the path, I look back and see the other children swarm the platform. I think of the families that night who will hear about a 4-year-old boy in a wheelchair who was on the swing, who ate food through his belly, who didn’t talk, but did smile as he swooshed through the air. As we pass the last of the kickball spectators, I think about how very simple — how very charitable, even — it can be to make space for someone else.

Amy Whipple is a Pittsburgh-based nonfiction writer and parent of the magnificent Wee Dude. She watches a lot of TV, eats ice cream every night and is working on a book about medical fragility and open adoption. Her work can be found in Pittsburgh Magazine, Vice and The Guardian, among others.

This article appears in the November 2018 issue of Pittsburgh Magazine.
Categories: Collier’s Weekly, Give Pgh