Perspectives: How Cold Is Too Cold for Spiders to Live?

A former Marine and Pittsburgh firefighter comes face-to-face with his biggest fear. 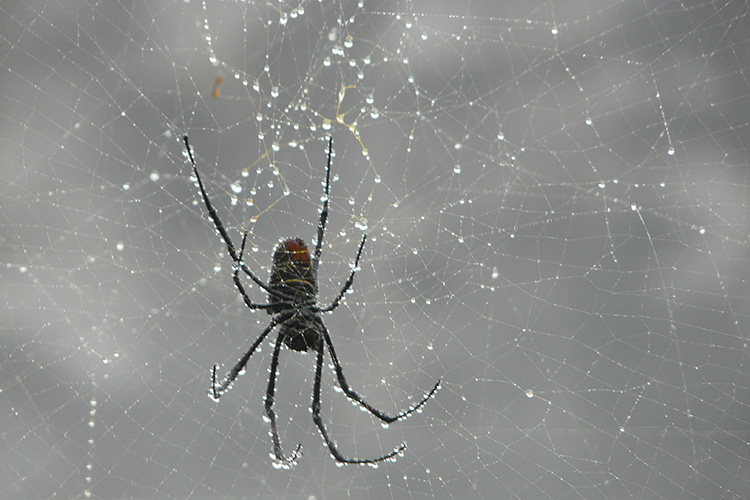 I’m trying to convince myself three is enough, that one more isn’t needed. Spring means get-togethers and pop-ins, it means people coming over on warm nights, to sit outside and cavort. It means three chairs may not be enough.

I know where I can get another chair. The fourth in this set is just behind my house in a shed.

I’m now standing at the open door of the shed, knowing I need that fourth chair, remembering why it’s still in the darkened, shadowy shed. The chair is against the back wall, behind what can only be described as a wall of spider webs. The doorway is covered by what looks like years of meticulous web making — intricate patterns of insect-catching angles cover every inch. My eyes move toward the chair, which presents itself like some kind of unattainable Holy Grail, in sight, but out of reach.

Looking into the abyss, I pull out my phone and type into the search… “How cold is too cold for spiders to live?”

While I wait for the little blue bar on my phone to slide to the other side of the page, I stare into the shed, well aware of why I’m standing in the rain, waiting.

It’s summer circa 1984, and 10-year-old me is playing in the bedroom of my house in Squirrel Hill. This is way before central air, at a time when hot houses meant opened windows, which meant bugs were common, if not expected. I’m on my bedroom floor, G.I. Joes in hand, when all of a sudden a spider no bigger than the head of a screw crawls across my arm. I freeze, and the spider manages to brush against every hair it can. It then saunters to points unknown under my bed, leaving me countless nights to wonder when it will finally strike again.

A few years later, while on a middle-school white water rafting field trip to Ohiopyle, I find myself in the back of a raft. Teenagers with no real oar maneuvering skills are just as likely to steer a raft into the shoreline than down the rapids, and we did so, right into a willow tree. Upon smashing into the tree, arachnid after arachnid rained down onto our boat. During the rest of the trip down river, my classmates’ screams of joy were met by my screams of terror at the innumerable daddy long legs that tried unsuccessfully to crawl off of my life-jacketed body.

Fast-forward to 1995, and my time on active duty in the Marines. My unit was training in the woods of Virginia; after a long day, we set out our sleeping bags to get some shuteye. At reveille, I huddle deeper into my bag, squeezing the last few moments of warmth from my olive-drab cocoon. Suddenly a fellow Marine alerted me to the dump truck size spider crawling up my bag and toward the warmth I fiercely clutched.

The spider did this while dragging an egg sac.

I wasn’t aware at the time that I had the ability to leap from an all out prone position to my feet in one deft movement, but I did, and proceeded to stomp the spider into the 5th dimension.

These moments flash before me while I stand in the chill of this early spring day, holding my phone, eyeing the chair within the shed and wondering, how cold is too cold for spiders to live?

I think, enough already. I finally acknowledge that coming face to face with my lifelong fear and overcoming it will be a monumental event. I wonder what other fears I can tackle with such zest.

While thinking about the possibilities that facing this fear will mean, I take one last look at my phone.
…Spiders can live in below freezing temperatures. Some survive in temperatures as low as -5 degrees Celsius…

I quickly close the shed door and figure standing never hurt anybody.

Billy Jenkins is a fiction and essay writer based in Pittsburgh. A Sergeant Major in the United States Marine Corps Reserve with more than 23 years of both active and reserve service, Jenkins deployed to Iraq in 2003 and again in 2006. Jenkins is a City of Pittsburgh firefighter with more than 17 years of service. He earned his MFA in Creative Writing from Chatham University in 2015.

This article appears in the June 2018 issue of Pittsburgh Magazine.
Categories: Collier’s Weekly, From the Magazine