When I move through Pittsburgh, I’m greeted by familiarity and peace. 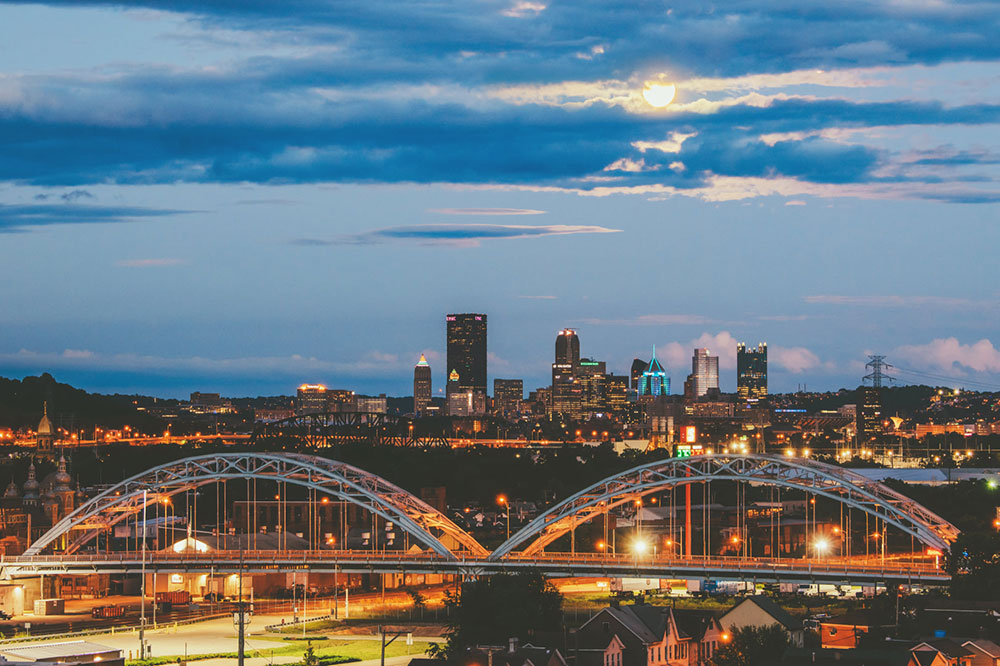 When I move through Pittsburgh, there’s a game I like to play. Whenever I drive past a familiar landmark, I pinpoint memories there. What I thought at the time. Who I was at the time.

This happens most often in Oakland and Squirrel Hill, where I spent my formative years. But it crosses all neighborhoods: North to Ross, shopping at bridal stores for special occasions; South to Mt. Lebanon, where a daily frozen coffee from one specific Bruegger’s made an unbearable summer internship bearable; East to Monroeville, where my parents would trek an hour and a half from our hometown to shop at the “fancy” mall before stopping at Rudy’s Subs to visit my dad’s cousin, the proprietor, who was always there when we stopped, always.

Often, one memory sparks another. I remember seeing John Kerry on Carnegie Mellon’s quad, my first big political rally. Friends convinced me to go, the same friends who, a few weeks later, convinced me to go to my first and only frat party, also at CMU; I spot that building as I continue my drive. There were a total of 10 people at that party, and we left before 11 without so much as a drink.

It’s been a game that has become especially important as of late. When I move through Pittsburgh, I feel more myself, and I haven’t felt very much like myself this year. As a teenage aspiring writer, I filled notebooks with inspiring quotes and Bible verses about hope. “Hope does not disappoint us.” “Where there is no hope, it is incumbent on us to invent it.”

But this year, it’s been hard to see past, well, this year. It was hard to imagine what a future looked like, so how could I have hope for it?

But when I move through Pittsburgh, I’m greeted by familiarity and peace. I cross one river, two rivers, one tunnel, two tunnels, climb Mt. Washington then the West End then the South Side Slopes. As I do, I remember. I remember who we are, who my ancestors were, and who I am. I find hope for who my children will be in this city — where not all of the changes have been good, in this city marked for its championships but also its vast inequality.

I never wanted to come here, live here, stay here. Pittsburgh was the “big city” I’d visit as a kid, but it was too small of a city for me to consider for the big future I dreamed of. But when I toured Pitt on a rare sunny day in April and crossed the busy streets and explored the culture that would be at my doorstep, I knew I was home. And I have been ever since. I live exactly 1.1 miles from the home where my Dad grew up. He tells stories of hitchhiking to Kennywood and Sundays at Forbes Field. I took him to Mazeroski Day a few years ago and it was … everything.

My city gives me back some of the hope I lost this year. I know that some day I’ll take my kids to Mazeroski Day. Then we’ll walk over to Dave and Andy’s. We will not get O fries, but that’s OK.

I’ll walk them through Pitt’s campus on a sunny April day and tell them I remember when the Cathedral of Learning was cleaned. I’ll tell them how we used to sneak out onto the roof between the 15th and 16th floors, out of windows that now have strong locks on them.

We’ll walk to Carnegie Mellon and see if the statue fools them.

I won’t argue if they want to leave, but I hope they stay and become part of the next generation trying to improve our city. I hope they can lean on it the way I have. And I hope it gives back to them what it’s always given back to me.

Lauren Davidson is a contributing associate editor at Pittsburgh Magazine. A graduate of the University of Pittsburgh, she lives in Edgewood with her husband, three sons and a cat named Ottis.

This article appears in the December 2020 issue of Pittsburgh Magazine.
Categories: Collier’s Weekly