A daughter struggles to accept the limitations of her ailing father. 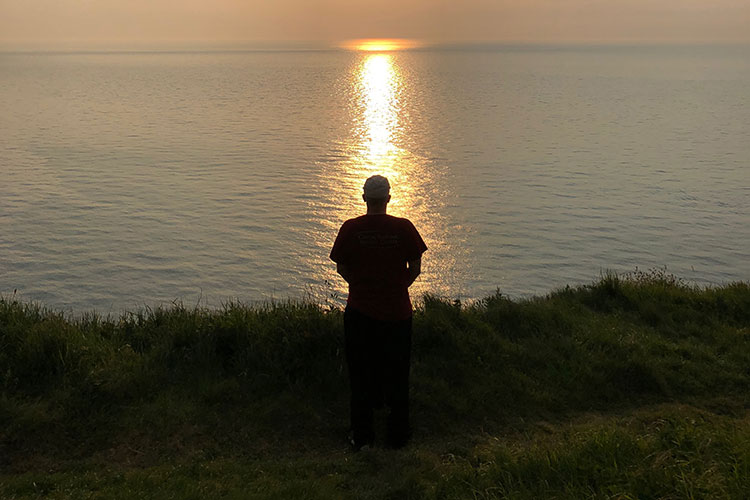 Dad and I are watching “Golden Girls” reruns on the couch. We’re holding hands. Sometimes, we drink milkshakes while paging through the newspaper. Sometimes we play catch. Today, the ladies are having their banter; when Sophia makes a sassy quip, dad lets out a familiar, full body, uproarious fit of laughter. It’s a reminder that my inability to be subtle when I’m laughing is hereditary. It is a decidedly good day. Dad is in a good mood. I feel so close to him.

For a moment, I forget where we are.

Still holding hands, he turns to me. With a confused, but warm, smile, he asks, “Are you sure you’re in the right place?”

I give him a hug goodbye and barely make it out into the hallway before crying.

Six years ago, while living in Fort Collins, Colo., I returned to Pittsburgh for a weeklong visit. While back at home, I saw how bad my dad’s health issues had become and knew I would need to return indefinitely. I wanted to be here while he still remembered who I was, before Alzheimer’s made him forget who I am.

My father, Tom Semler, was the kindest, warmest father. Growing up, I can’t remember a day where I wasn’t told that I was loved. He taught me to be compassionate, patient and loving. He was also courageous; after leaving the seminary (he says he “didn’t enjoy the praying like I thought I should”), he served in the Marines and then joined the Peace Corps. He was serving in the Dominican Republic when revolution broke out; he refused to leave, saying that someone needed to protect the people in the village where he lived.

Even now, it fills me with guilt to talk about him like this — in the past tense. He’s still here.

As his memory and comprehension began to deteriorate — he was diagnosed after a hip replacement in 2008 — he would fixate on specific memories, reciting them again and again. Nearly every time I saw him, he brought up the night before my graduation from Edinboro University; he and my mom attended a small ceremony where I collected different cords and sashes. A host of professors was lined up, shaking hands with students. According to Dad, I was the only student who got a hug, rather than a handshake, from every professor in line. He was so damn proud.

I’m thankful his brain chose that memory to play on repeat.

I’ve found a career in my father’s footsteps. Dad was over the moon when I ran the Students for Obama group in college. I planned to join the Peace Corps after graduating, just like him, but opted to be an AmeriCorps VISTA volunteer instead, working for an organization dedicated to fighting relational aggression and bullying.

After moving back home, however, I had to rebuild. I had a decent job, but as a melancholy philosophy grad, I feared I wasn’t doing meaningful work. My dad has this unending, supportive (even annoying) positivity. This was only a phase, he assured me. I was going to find something amazing, I was a superstar (man, did he love that word). Remember that time before graduation, when I got all those hugs?

And now, I’m working at a great job. Soon after I was hired, I met former Congressman Joe Sestak at an event. My dad had volunteered a lot for Sestak when I was a kid. When I told my dad about the meeting, though, there was no recognition in his face — just some confusion and a slight pang of embarrassment.

Around this time, I could tell when my dad knew he was missing information he thought he should have. Sometimes he doesn’t say very much, sometimes he says a lot — even with impressive vocabulary — but none of it makes sense. I’ve learned to listen intently and agree with him; I want him to feel heard. I’ll put my arm around him, and he’ll make a sound of contentment. This makes me happy.

In April, I was unanimously nominated as president of the Young Democrats of Allegheny County. Within an hour, I had received more congratulatory texts than I could count. The excited thoughts rolling through my head were interrupted: “Dad would be so proud.”

Dad would be so proud.

I started weeping, hot tears streaming down my face. Deep breaths and a pain in my chest.

I know without a doubt that my dad would be happy for me. I hope he would have felt partially responsible. But he can’t witness and understand it. I wish he were here — fully here — so that I could tell him he was right. To thank him.

Alzheimer’s is cruel. Reconciling feelings of deep loss and grief for someone when you can still hold their hand is deeply complicated.

Jessica Semler is a contributing writer for the Pittsburgh Current, and shares commentary on social issues on her blog, jessicarabbid.com. She is the former public affairs director for Planned Parenthood of Western Pennsylvania, and continues to advocate for reproductive rights in various community groups. She was named to The Incline’s list of activists building a better Pittsburgh and was in 2017 the runner-up in the Pittsburgh City Paper’s “Best Activist” award. She is a proud resident of Etna.

This article appears in the April 2019 issue of Pittsburgh Magazine.
Categories: Collier’s Weekly, From the Magazine