PM Editorial Intern Sylvan Lebrun discovers the city by looking at the Miniature Railroad & Village, the subject of a new book available at the Carnegie Science Center. 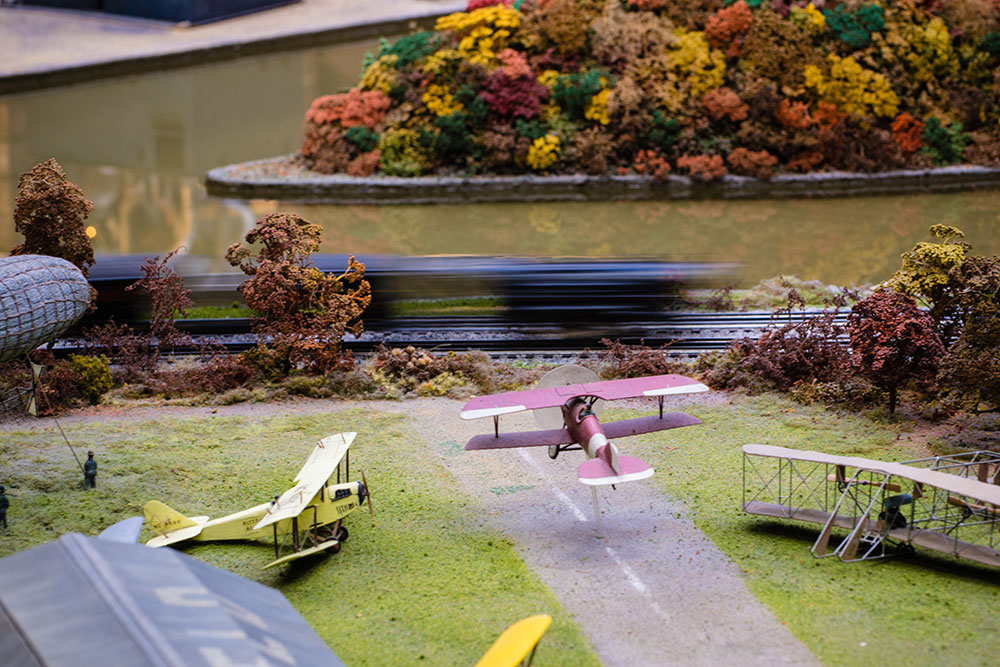 Over the course of about half an hour on a cloudy Monday morning, I watch the sun rise and set five times over the city of Pittsburgh.

In the room that holds the Miniature Railroad & Village at the Carnegie Science Center, each day is seven minutes long — the model is under shadow one minute and bright lights the next, as tiny trains hauling lumber and coal chug around a winding track. Children, parents and teenage couples stand around the 83-foot exhibit, peering into replica houses and snapping pictures. As I circle around, I pass a steel factory, a farm, a theater, an amusement park and a department store with glowing windows. Rolling hills of model trees overlook the three rivers.

Connie George, my tour guide for the day and the Science Center’s Senior Director of Marketing and Community Affairs, points out certain models as we go along, walking me through the city’s landmarks. Fallingwater, Forbes Field, Primanti Bros. and the Monongahela Incline. The homes of Rachel Carson, Mr. Rogers and Daisy Lampkin. 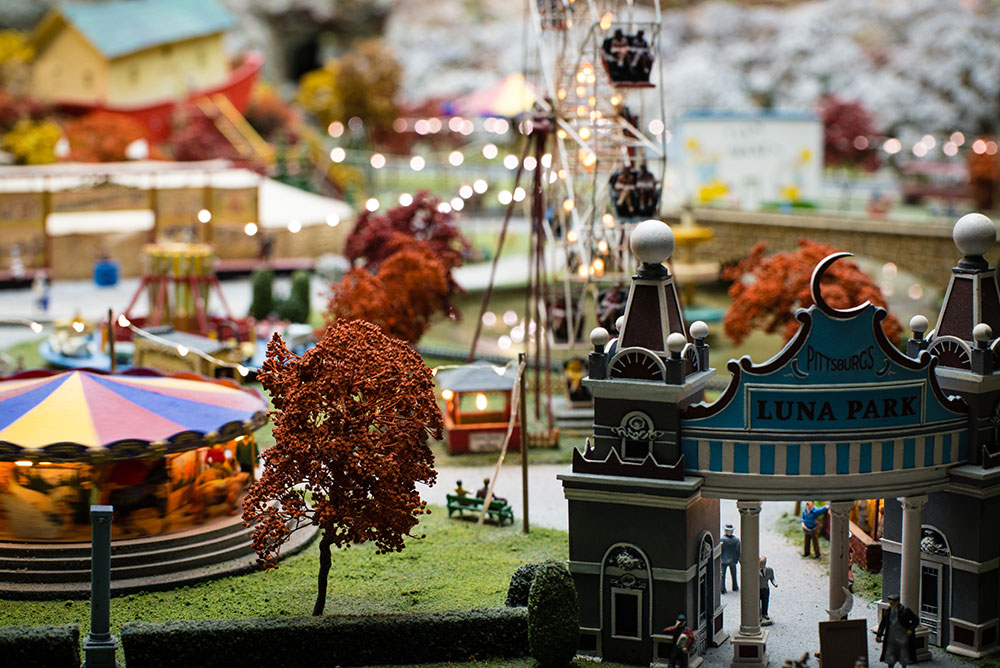 On my first day at the Pittsburgh Magazine office last week, my editor handed me “A Love Story: The Miniature Railroad & Village,” a new book about the 100-year-old exhibit, and sent me on an assignment to see the model in person, wanting to know what I would think as a visitor to the city. Co-authored by Robert Gangewere and current curator Patricia Everly and available in the museum gift shop, the book tracks the history of the Carnegie Science Museum’s famous model. It contains detailed photographs of the village, behind-the-scenes secrets, and explanations of the historical importance of the landmarks replicated in the set.

Many of the Miniature Railroad’s familiar landmarks were new to me; when I visited, I hadn’t yet spent two weeks in Pittsburgh. At the start of July, I took a seven-hour Greyhound ride from Philadelphia to Downtown, watching the waterways and hills of the Steel City open up in front of me through a foggy bus window. Since arriving, I’ve jogged through Schenley Park, eaten at Green Pepper in Squirrel Hill and watched the Independence Day fireworks from the North Shore. Yet after a single morning at the Carnegie Science Center, with children rushing around me, I have likely “seen” more of Pittsburgh than I will otherwise be able to in the remaining three weeks of my time here.

While visiting the Miniature Railroad & Village, I met with Everly herself. She showed me her workshop, where faux grass and out-of-use model buildings filled the shelves. Each model in the Miniature Railroad & Village is handmade, and the painstakingly meticulous work can take months. “There are no one-trick ponies in the set,” Everly says; each model must function on multiple levels, not simply as replicas but also as keys to understanding its history, architecture, topography, and culture. A model of the Crawford Grill jazz club illustrates that aim — it features a figurine of Charles “Teenie” Harris outside with a camera, a nod to how the photographer captured the spot. Through blink-and-you’ll-miss-it details, the model creates a layered picture of the city’s history. 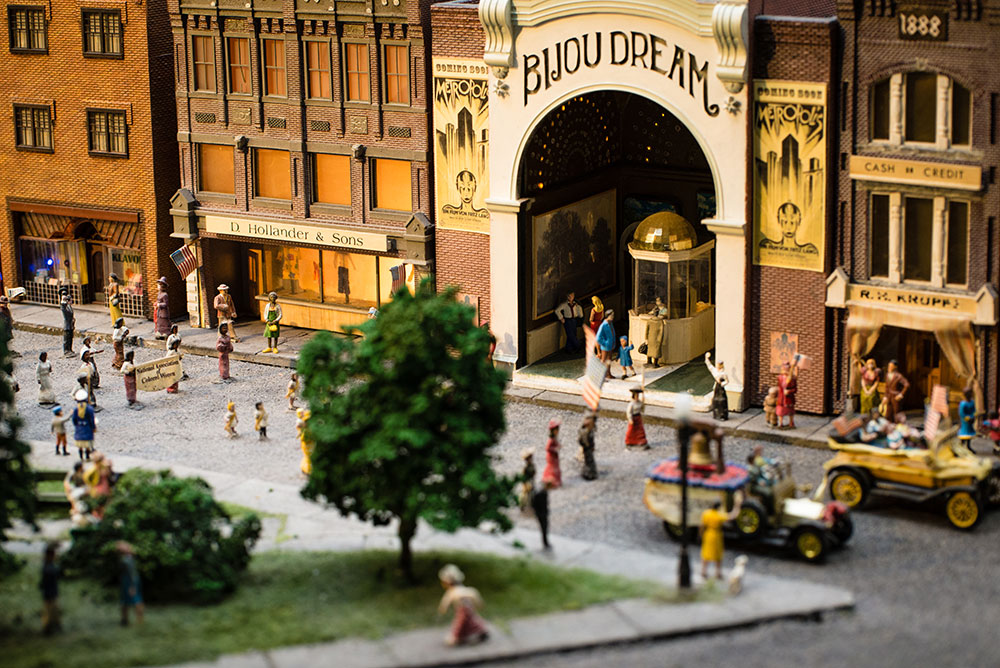 The closer you look at the Miniature Railroad & Village, the more you notice its constant motion. Couples dance on the porches of farmhouses, while children swing from tree branches. The Sharon Steel Mill is in full operation, with buckets carrying ore and limestone into a glowing furnace. Across nearly every corner of the exhibit, one sees traces of the city’s industrial past; quarries, steel mills, and company towns. The figurines too are often laboring, building bridges and mining limestone. Even the landscape of the set itself undergoes constant change — by policy, at least one new building is added to the exhibit each year. Laid out in front of me in miniature, I begin to get a feel for the city for the first time, in all of its dynamism.

Before I leave, I am shown a model of Luna Park, the defunct amusement park that was open for only four years in the 1900s. “The kids all love this one,” Connie says. The replica is full of light, color, and movement, featuring mechanized miniature merry-go-rounds and teacup rides in addition to a quintessential Ferris wheel. The tiny ride spins in a perfectly engineered flash of color above figurines of giraffes, elephants, and performing seals, in a model park that is bracketed by an oil well on one side and a quarry on the other. A blend of whimsy and industry, just like the train set itself. Maybe it’s just like the city, too — but I think I’ll have to see more of the life-sized Pittsburgh to truly find out.