In a much-discussed speech, the Pennsylvania congressman took a stand simply by calling lies what they are. 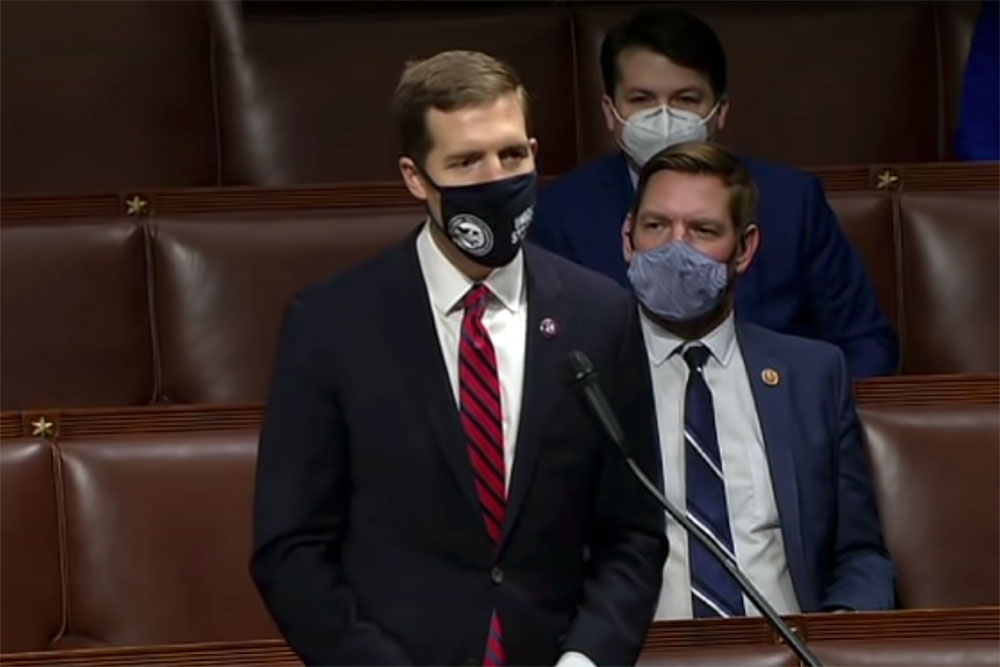 In the early hours of the day after the Capitol was attacked, Conor Lamb was fired up.

The Congressman who has represented Pennsylvania’s 17th district since 2019, had not been known for fireworks on the floor of the House. The young representative is a moderate, reflecting a district comprised of both left-leaning suburbs and more rural areas stretching toward the state line; while Lamb is a Democrat, his voting record sits to the right of most of his party.

Yet after American citizens mounted an insurrection against the operation of government — a feat the Confederate States of America never came close to achieving, a breach last committed more than 200 years ago by an invading army — Lamb was ready to speak plainly.

The house was debating an objection to the slate of presidential electors submitted by the Commonwealth of Pennsylvania. This objection, an entirely performative gesture interrupting a purely ceremonial bit of parliamentary business, was a futile stunt. It was lip service paid to the idea that there was some doubt as to the security of Pennsylvania’s election or the validity of its result.

The representatives who lodged this objection, and a previous version of the same directed at Arizona’s results, knew that their effort would not affect anything; they knew their protest would not delay or change the outcome of last year’s presidential election.

Lamb knew this was a futile scrap of obstinance — a ballet of feigned concern, danced by representatives fearful that their loudest constituents expected them to throw a legislative tantrum upon command.

So, after a day of terror, Lamb evidently threw out his planned speech. The prepared statement would’ve pointed out that even the frivolous grounds upon which the objection had been lodged were inaccurate at best and deceptive at worst. Lamb pivoted, however, and changed his tone.

“Because to do this with any kind of honesty means admitting and declaring, in this House, that these objections don’t deserve an ounce of respect. Not an ounce. A woman died out there tonight, and you’re making these objections. Let’s be clear about what happened in this chamber today: Invaders came in, for the first time since the War of 1812. They desecrated these halls, and this chamber, and practically every inch of ground where we work.”

It was somewhere in here that some of Lamb’s fellow representatives began to shout, sensing that — in an extraordinary change of pace from much of the day’s speechifying — someone was saying something they actually believed.

A few moments later, Representative Howard Morgan Griffith, of Virginia’s 9th district, raised a point of order, asking that Lamb’s description of the objections as “lies” be stricken from the record.

What followed was an irritating back and forth; House Speaker Nancy Pelosi attempted to maintain order, Griffith and his buddies did some shouting and Lamb finished his speech.

In watching the video, I was certainly struck by Lamb’s passion and tone, which was spot on, given the day’s depressing events. But I was also impressed with the use of the same word that so enraged the congressman from Virginia: lies.

There is a reluctance to use that word in polite circles. Media outlets generally dance around it, using euphemisms such as “falsehoods” or “misleading statements.” This is done largely for legal reasons relating to libel, but it has the side effect of watering down the offense: If we don’t call a lie a lie, we give the impression that it might be somehow less destructive.

Lamb, on that night, was determined to call the evening’s lies by that word, and that word alone.

It seems that Lamb understands something that too many of his colleagues, as well as a substantial chunk of the nation’s breathless punditry, have forgotten: A lie does not necessarily have to be a statement you know to be false. If you make a statement you have no reason to believe is true, you’re still lying.

Those whose bread is buttered by lying would believe that it doesn’t count unless you know for a fact that a statement is a lie — that only a provably incorrect statement, such as “Mario Lemieux is the President of the United States,” qualifies as a lie.

It is just as much of a lie to make a statement that is based on nothing — to present fiction as fact. If I said, “Mario Lemieux is at this moment sitting in a small treehouse,” I do not know for a fact that I’m incorrect. Since I don’t know where Mario is right now, my statement could, theoretically, be accurate.

But I’m lying. I don’t have any reason to believe that it’s true; I’m just saying something. That’s a lie.

It is just as much a lie that there is doubt over the validity of Pennsylvania’s election results. There is none. They have been audited, checked and reviewed. They have been counted, by a bipartisan group of honest and active citizens who were stalwart and tenacious in their work. Aspects of the process around the vote have been litigated; in all such cases, concerns have been determined to hold no merit.

In other words, to say that there is doubt that these returns are valid is a lie. Because there’s no actual reason to believe that.

I’m proud of our representative for defending the state, but I’m much more emboldened by his decision to call a lie a lie — to declare, in the Congressional record, that these charges are, simply, lies. There has been too much comfort and equivocation around the truth in recent years; this lack of concern over what is fact and what is fiction has grown to a dangerous point, as many are happy to accept only the version of reality that is most convenient.

Lamb’s early-morning speech gives me a glimmer of hope that, in the aftermath of an exhausting, disastrous, deadly year, we have had enough of lies.

We have seen, after all, that no matter how absurd the lie, there are those who will believe it. People, in large numbers, will believe lies and continue to believe them in the face of all evidence.

And when those lies run into the truth, some of those people will be angry enough to act. That anger is dangerous. On Wednesday, it led directly to an insurrection that interrupted the function of this nation’s government — a terrorist attack, fueled by lies.

As one grandstanding representative or another yelled at Lamb, he turned from the podium and issued a defiant challenge.

That would be a start. In the future, though, perhaps we should make it a goal to only speak when we have something true to say.