A former Pittsburgh television reporter recounts the lessons taught to him by his grandfather who spent more than four decades as a Pullman Porter. 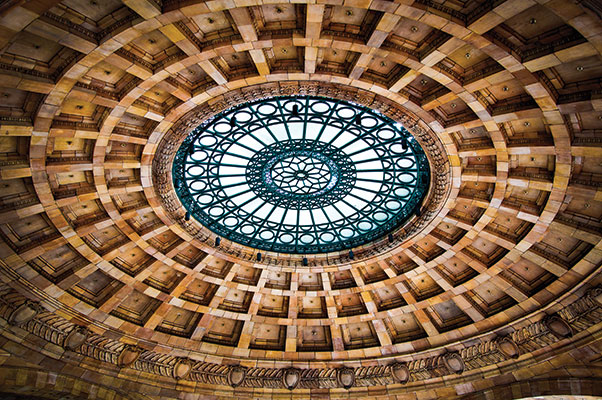 My grandfather and I had a special relationship. After my father died when I was 9, he was the one who took me to Pirates games at Forbes Field. Even more importantly, he took me with him to Pennsylvania Station Downtown (now the Pennsylvanian). It was those trips that helped to define our relationship.

For 42 years, beginning in 1909, my grandfather was a Pullman Porter, servicing passengers in sleeping cars along routes of the Pennsylvania Railroad. He retired the year before I was born. But I was fascinated with Thomas L. Burrell’s stories about life on the railroad. Although the train he worked the longest — the Red Arrow between Detroit and New York — was no longer in service, there were still daytime trains (the Duquesne, Juniata and the Pennsylvania Limited) at the station when we visited occasionally so he could handle pension matters. The night trains I didn’t see because they left past my bedtime: the General, Manhattan Limited and the Broadway Limited. But their marquees were still visible above the track where they’d arrive, and all of that sparked my imagination.

My grandfather ordinarily had a caring and teaching tone with me, so it came as a shock the day I put on his Pullman hat, pretending I too worked on a train. “Take it off,” he said in a tone I’d never heard from him before. “Take it off!” I quickly did as he said. But I was baffled. After all, I may have been the only kid in my class who could name the stops on the Pennsylvania Railroad between Pittsburgh and New York — not that any of my classmates saw that as useful information.

In all of his stories about locomotives, sleeping cars and dining cars, the only conversation I can recall we had about dealing with people focused on his view of socio-economics and customer service. His growing up as one of 10 children in rural Rappahannock County, Va., in towns such as Peola Mills, Scrabble and Woodville, did not afford him a chance to study psychology. But his years on the road gave him a unique perspective.

“The people who always had money were the nicest people I ever dealt with,” I can remember him telling me. “But the folks who just recently were able to rub two nickels together would try to treat you like dirt.”

As I grew older, I understood the racial factor in all of this. The African-American men who labor leader A. Phillip Randolph organized into the Brotherhood of Sleeping Car Porters were required to work 400 hours per month or 11,000 miles — whichever came first — to receive full pay. Those 400 hours spread over 31 days would average 12-hour days every day with no days off. The porters, who did a job deemed fit only for black people, depended on passenger tips, which usually added up to more than the base salary they were paid. And in the years between 1909 and 1952 when my grandfather worked for the Pullman Co., I can only imagine what kind of indignities he suffered.

And yet, as I look at what he accomplished, I am amazed. His pension records show that between 1924 and 1931, he earned a total of just $9,386.61, yet in 1925 he built a home in Beltzhoover. Within the black community, Pullman Porters had a degree of prestige because they had the pulse of distant cities (the black-owned Pittsburgh Courier used Porters for distribution in the South), and they knew the social graces and helped to build the black middle class.

My grandfather didn’t live long enough to see me on the air at KDKA-TV. But every time I did a live report from the federal courthouse, on the sidewalk of the old Pennsylvania Station across the street, I couldn’t help but think about my grandfather who used that same sidewalk — on his way to work.

Harold Hayes was a reporter for KDKA-TV for 36 years before his retirement in April 2016.

This article appears in the March 2018 issue of Pittsburgh Magazine.
Categories: Collier’s Weekly, From the Magazine