Perfect Your Arc in This Game of Ancient Athletics

See where you can make like a prehistoric hunter by throwing an atlatl-assisted spear as far as you can. 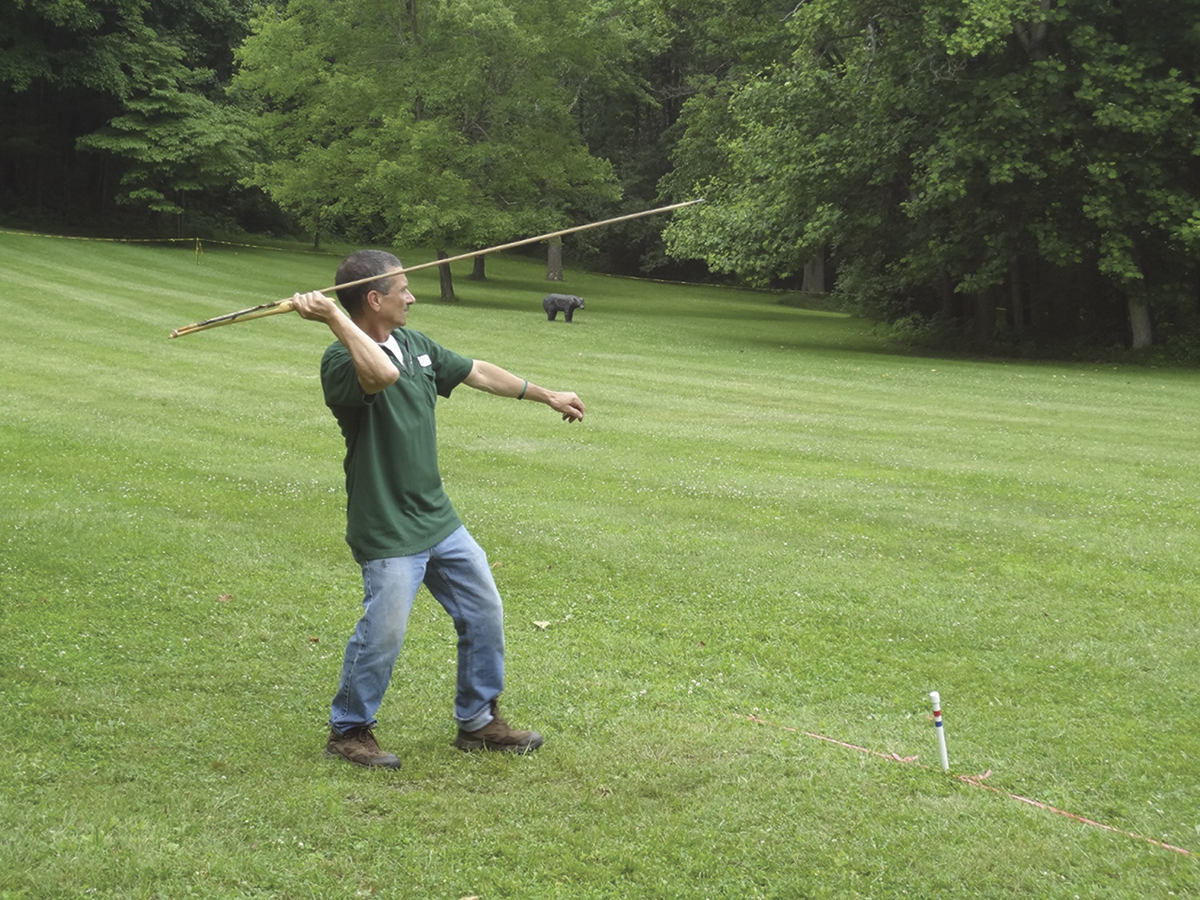 Pop quiz: After the hand-thrown spear, but before the bow and arrow, what was the tool of choice for prehistoric hunters? If you guessed the atlatl, you’re way more trivia-savvy than we are. Or you’ve previously attended the Meadowcroft Rockshelter and Historic Village’s annual Atlatl Competition. The atlatl is a long stick with a finger loop on one end and a small cup at the other; the cup nestles a spear, allowing the thrower to launch the projectile a great distance with great force. Success depends more on skill than strength; the very best practitioners can arc an atlatl-assisted spear at more than 90 mph. On June 20, you can see this ancient art for yourself at the 17th Annual Atlatl Competition, held at Meadowcroft in Avella, Pa. 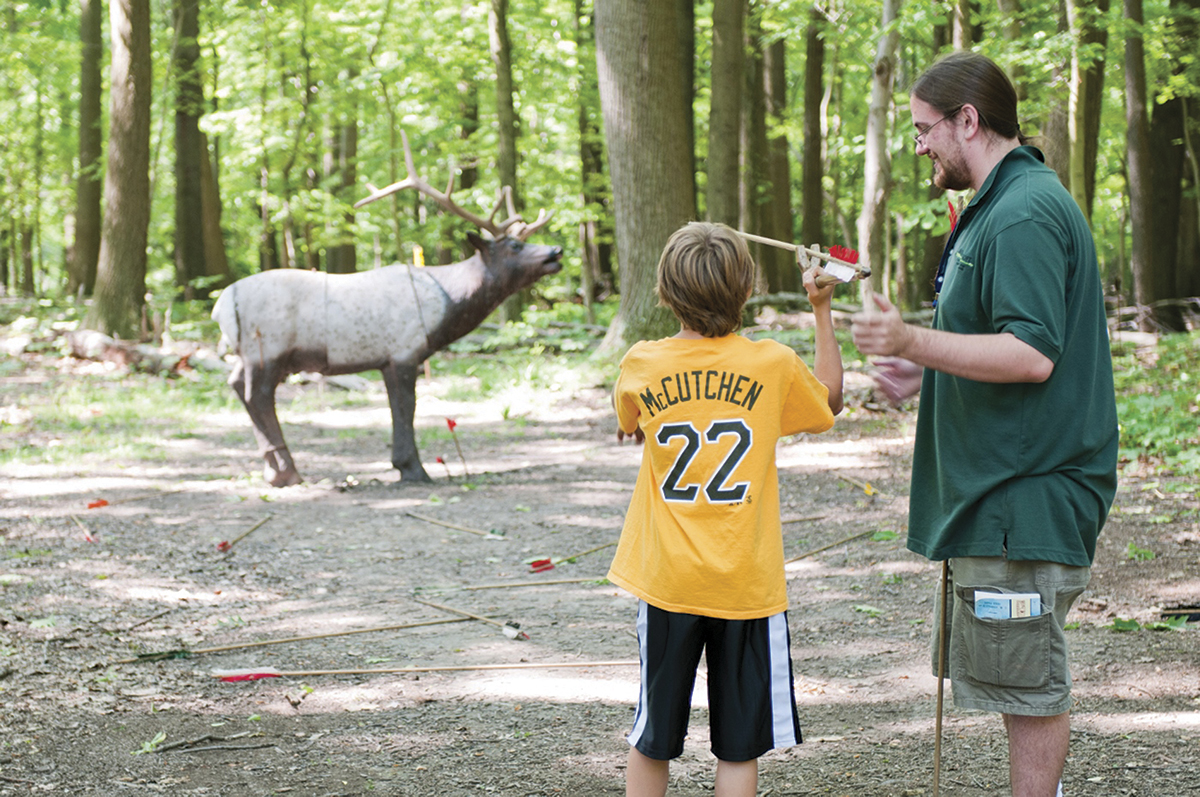 There you will find nationally and globally ranked throwers competing for points; those same experts encourage and instruct novice visitors in basic techniques that will send spears whizzing into hay bales and animal-shaped targets. “We’ve had a number of people who have never heard of [the atlatl before] come here and try it,” says Meadowcroft Director David Scofield. “Then they come back again and compete.” That group includes Margie and Frank Takoch, who now run Meadowcroft’s competition and are staples on the World Atlatl Association scene. If you haven’t visited, Meadowcroft’s huge, 16,000-year-old Upper Paleolithic rock overhang is pretty darn awesome on its own. Getting a chance to try a weapon that the area’s earliest inhabitants, who used the overhang for shelter, might have used? Even better.

#Support: “A Day in My Shoes” helps some women to get back on their feet

San Francisco-based freelance photographer Amy Martin-Friedman is giving Pittsburgh women a chance to strut their stuff and spread awareness for domestic abuse at the same time.

Her international photography project “A Day in My Shoes” is the child of a nonprofit of the same name that raises funds to support survivors of domestic violence. On June 10-17, the organization is hosting $675-per-person photo shoots, and registration will be open throughout the week. Pittsburgh participants will get the chance to show off their kicks and share stories of how they’ve overcome challenges in their lives, from abuse or anything else. These pics and blips will be included in the project’s upcoming coffee-table book, which will be celebrated at a release party and gallery opening in October. The nonprofit A Day in My Shoes partnered with the Women’s Center and Shelter of Greater Pittsburgh and the Allegheny County District Attorney’s office to bring this project to our city.

The women featured in the book will be anonymous, with accessories such as umbrellas, hats and hair obscuring their faces to protect their identity. Martin-Friedman, who is a survivor of domestic abuse, was inspired to start the project after she woke up in the middle of the night and scribbled the idea on a Post-It note.

“While I was with my ex, I got very large, [but] my shoes always fit. And no matter how I felt about my body, I always loved these shoes,” says Martin-Friedman in the project’s promotional video. “I always felt better in a really cool pair of shoes.”

In addition to being featured in the book, participants will receive a 16-by-20-inch mounted canvas print and an invitation to the gallery opening. At the celebration, books also will be available at a discount to participants.

Cynthia Liefeld, the nonprofit’s managing director, is working with local establishments to be featured “locales” in Pittsburgh, to showcase the city as well as its people. Mount Washington, The Andy Warhol Museum, Pittsburgh Zoo & PPG Aquarium, PPG Plaza, Point Park University and parts of Sewickley will serve as backdrops. A Day in My Shoes also has visited San Francisco, Baltimore, Sarasota, New York City, Georgetown and Grand Cayman.

Liefeld adds that the book also will feature Pittsburgh’s bridges, symbolizing the transition from women being victims to survivors. She says the Birmingham Bridge might be featured.

Martin-Friedman, who hasn’t visited Pittsburgh since she was 5 years old, says she’s excited to get inspired by “a new beautiful backdrop.”

“I started this project to give back to women who didn’t feel like they had a voice. I wanted to give them that voice anonymously,” Martin-Friedman writes in an email. “It is through one photo, that I feel like it can help start the transformation in your soul rebuilding process.”