Pens Look Back and Ahead to Cap ‘Summer of Stan’

The puck drops for the opening of training camp on Friday, and once that happens the Penguins must transition from “champions” into “defending champions.” 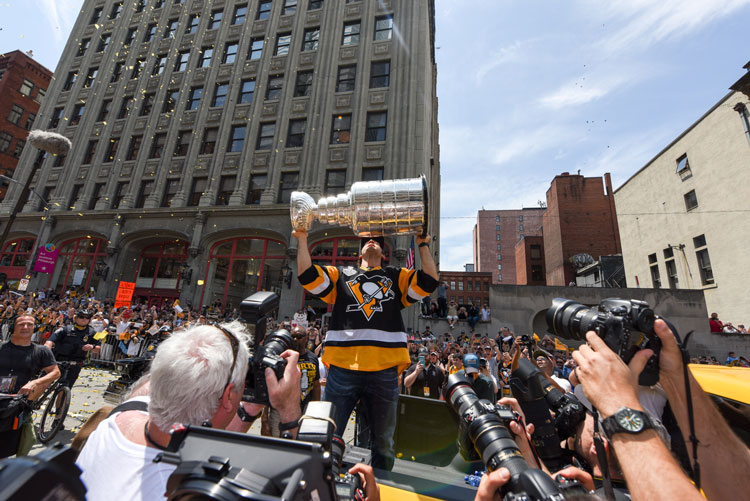 The Stanley Cup didn't make it as far as Siberia’s Ural Mountains this summer (it had once been there with Detroit’s Pavel Datsyuk) but still managed to pile up the frequent flyer miles prior to showing up at Allegheny Country Club this week.

“We’ve been to six different countries,” noted Phil Pritchard, unmistakable in hockey circles as the “Keeper of the Cup,” upon his arrival in Sewickley.

Those would be Canada, the United States, Finland, Sweden, Russia “and for the first time we took the Cup to Germany,” Pritchard added.

He had Tom Kuhnhackl to thank for that.

The Cup even made its way to Notre Dame, where it attended a tailgate party and a football game and also made stops at “all the tourist sites,” Notre Dame hockey product Ian Cole reported.

Those would include “‘Touchdown Jesus,’ ‘The Grotto’ and the (Golden) Dome,” according to Cole.

Yet Cole and Bryan Rust, who also played his college hockey for the Fighting Irish, may not have had the most memorable or most cherished connection with the Cup.

That honor could well belong to veteran Matt Cullen, a second-time champion who got to celebrate with his kids this time around.

“The first time I was on a team that won it they weren’t around,” Cullen explained. “So it was pretty special as a dad, to be able to do that and see your boys eating cereal out of the Stanley Cup.

“It doesn’t get any better than that.”

No wonder the Penguins wanted to squeeze every last ounce of appreciation out of it at the golf outing the team annually stages in advance of the opening of training camp.

The puck drops for that on Friday, and once that happens the Penguins must transition from “champions” into “defending champions” as they attempt to repeat –– something no one in the NHL has done since the Red Wings in 1997-98.

“You don’t want to come in the season being soft.”

That made Tuesday a day to reflect and at the same time a day to look ahead.

No wonder Cole couldn’t resist the temptation to do both.

Recalling the time he had spent with Rust and the Cup at Notre Dame Stadium and its surrounding landmarks, Cole remembered being significantly slighted by Rust when it came to all that ended up being posted on social media.

“He got all the glory,” Cole complained with a Stanley Cup championship-winning smile on his face.

“I might need to take it back next year after we win it again and maybe get some more photo ops.”