Pens After Even More, Not Merely More of the Same

This Penguins squad is a different animal from predecessors that expected to win on talent alone.

After the tear they’d been on had reached 11 wins in 12 games without Evgeni Malkin, after yet another playoff qualifier had been steamrolled with apparent ease and as the players were in the process of giving the fans the jerseys off of their backs, Mike Sullivan spoke of extracting even more from the Penguins.

“I still think we have another level to this team,” Sullivan insisted out loud on Sunday, after the Flyers had been flattened, 6-2.

The Pens have already reinvented themselves well enough to become what Sullivan had intended them to become all along, a difficult team to play against. 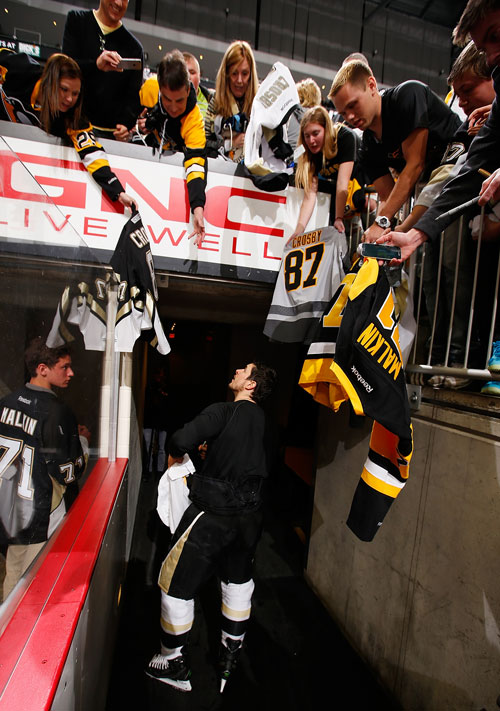 They have done so as much with effort and execution as they have star power (Marc-Andre Fleury missed the Philadelphia game, and preceding the 5-0 blanking of the New York Islanders, as did Malkin, among others).

By embracing basics such as puck management and actually shooting the puck on the power play when open shots present themselves and net-front presence has been established, by maximizing their abundant team speed with a maximum compete level, the Penguins have already honed an overall game that ought to translate in the postseason.

The approach has been to get the puck where it needs to be and then let the talent and tenacity take over from there, and it’s been working at both ends of the ice.

Well enough that it ought to have inspired an unshakable belief by now.

“It should give our guys plenty of evidence that regardless of who our opponent (in the playoffs) becomes that we can win,” Sullivan said. “When our team plays the game the right way, and we’ve used that phrase a lot and we’ve tried to define that with our guys, we’re as good as any team in the league and we can beat anybody.

“When you look back on the last couple of weeks, our players deserve a lot of credit for how hard they’re playing and how smart they’re playing. It’s a combination of those two things that I think adds up to results.”

That commitment to playing hard and playing smart makes this Penguins team a different animal from predecessors that expected to win on talent alone and considered themselves above adhering to the necessary details.

It makes these Penguins dangerous.

But Sullivan’s reference to the Penguins as a team “that can win,” and one that’s “as good” as anyone is significant.

It acknowledges that nothing is guaranteed, even after winning 12 of 13.

Perhaps that’s why “another level” will be needed in the postseason.

And that explains why, entering the regular season’s final week, the Penguins still had an agenda.

They had already secured their spot and all but wrapped up home-ice advantage in the first round of the playoffs, but Sullivan had no intention of stopping now to take a collective bow.

Desperation helped get the Penguins this far.

Determination can take them a long way the rest of the way, which is why the objective at the outset of this week was to continue to play as hard, as smart and as determined against the Senators, Capitals and Flyers as the Penguins have been against everyone else of late.

“I like the way our team is playing right now,” Sullivan emphasized. “We’re going to challenge one another and push each other to continue to get better.”