The Penguin winger fits in easily with the team, thanks to his infectious personality and his mad dedication to confounding opposing goaltenders. 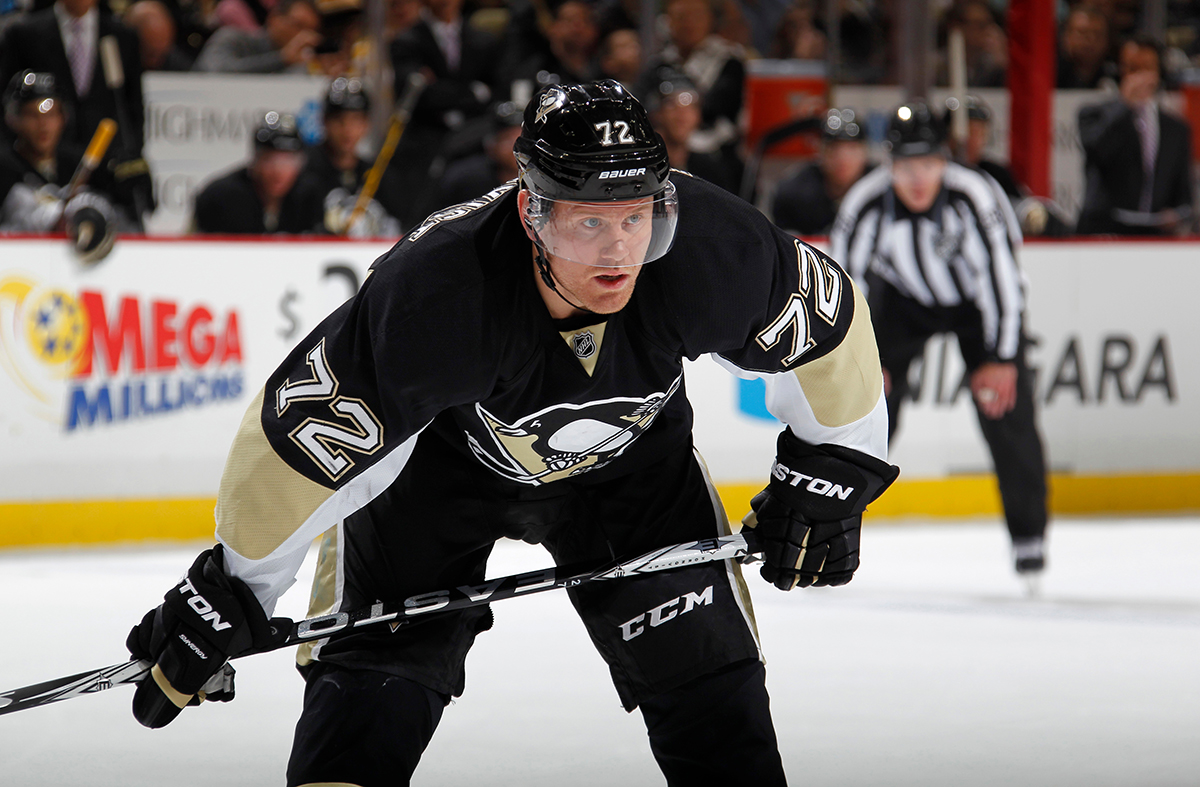 Penguins star Evgeni Malkin reached back and unleashed his signature sizzling slap shot — a blast so dangerous that it once broke the leg of Boston’s Gregory Campbell. As the puck increased in velocity and went airborne, teammate Patric Hornqvist stood without fear in its path. New York Islanders goalie Jaroslav Halak did not stand a chance. The scrappy Hornqvist, battling for position with Islanders defenseman Johnny Boychuk, simultaneously blocked Halak’s sight line and redirected the puck into the back of the net.

The goal won’t go down as one of the most artistic in recent Penguins lore — such highlights are reserved for Malkin and captain Sidney Crosby — but it was a reminder that Hornqvist arguably is the greatest net-front presence in the National Hockey League.

To hear Crosby and left winger Chris Kunitz tell it, Hornqvist is a gladiator on skates.

“He’s willing to pay the price. To do whatever is necessary,” Crosby says.

Per Kunitz: “Patric takes a beating for the good of the team.”

Hornqvist has the scars to prove it. He’s endured broken bones in both feet. Bruises to his back and his ribs. And worst of all, according to Hornqvist, a cross-check that caused him to smash his hand on the ice and lodge his knuckle in his palm.

“Hardest thing I’ve dealt with yet,” Hornqvist says. And such activities are hazardous duty for a man whose dimensions are a mere 5 feet, 11 inches and 189 pounds.

“I don’t think I’m tougher than anyone else,” he says. “I play the game the way I believe it should be played. The key is taking those shots and getting back out there for your teammates.” 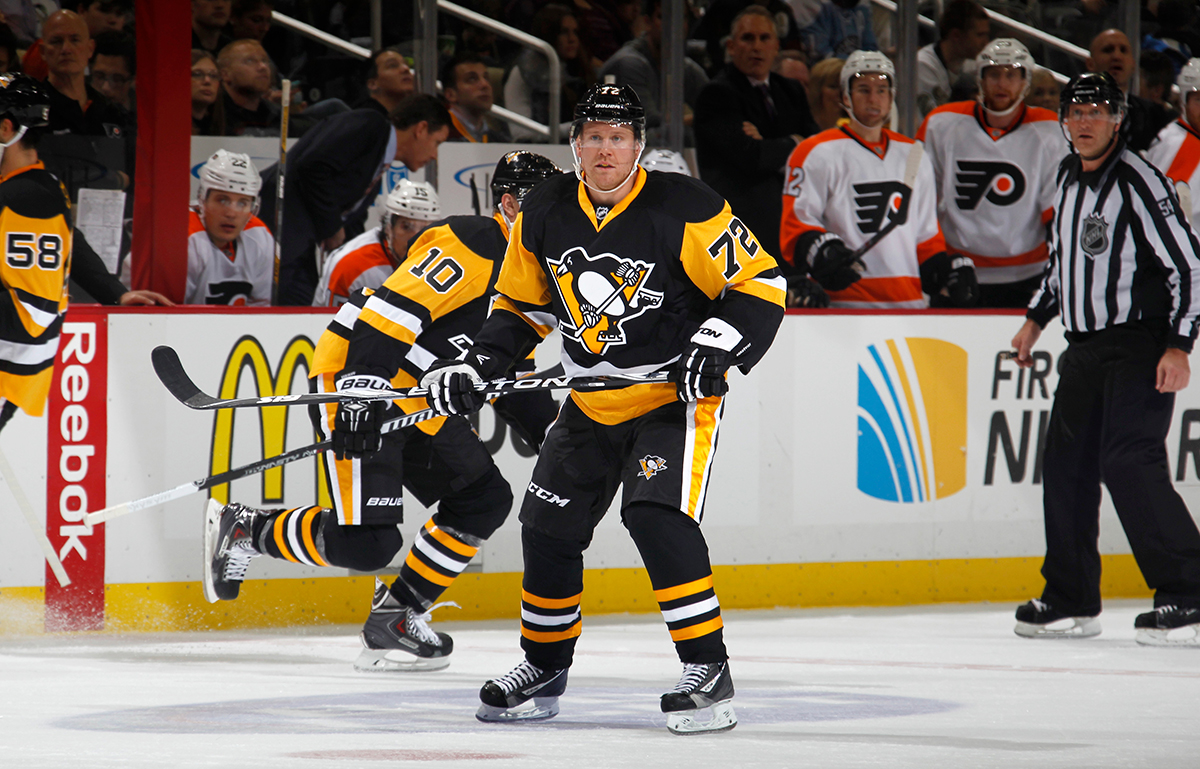 ​Hornqvist, 28, is precisely what Mario Lemieux sought this offseason. The owner’s mandate was to add grit and toughness; Hornqvist offered both. A draft-day trade sent all-star and one-time 40-goal scorer James Neal to the Nashville Predators for Hornqvist and forward Nick Spaling.

The Predators, to their credit, readily acknowledge that parting ways with the all-out, all-the-time Hornqvist was bittersweet.

“Informing Patric of the trade was one of the more difficult things I’ve done,” veteran Nashville General Manager David Poile was saying months after the transaction. “You’d like to make a deal for Neal and not have to give up a player like Hornqvist, but unfortunately we needed to shake things up. He was a heart-and-soul guy for us.”

“Sometimes, you watch a player when he’s playing for another team and you wonder how it will translate to your team,” says Penguins coach Mike Johnston, who used Hornqvist on the No. 1 line with Crosby and Kunitz early in the season before shuffling personnel. “For Patric, it was easy. He’s fit in well because his game doesn’t change. It wouldn’t matter who he’s playing with. He plays with speed; he plays direct. He has no concern for the physical play at the net. He’s willing to sacrifice himself to score goals, and with the players he’s playing with, he gets those opportunities.”

It would be inaccurate to suggest that Hornqvist is one-dimensional. The right winger has scored via one-timer, wrist shot, deke move and breakaway in his time with the Penguins. He also is instrumental on the first power-play unit due to his right-handed shot, which complements a team loaded with lefties.

The son of a former goaltender, Hornqvist learned early on that showdowns with vulcanized-rubber discs might become his livelihood. After originally patterning his style after finesse-oriented fellow Swede Peter Forsberg, he turned to another countryman: Tomas Holmstrom.

A four-time Stanley Cup winner with the Detroit Red Wings, Holmstrom was the NHL’s pre-eminent net-front force until his retirement in 2013. Hornqvist closely studied video of Holmstrom, analyzing every nuance of his game. He learned proper stick positioning, where to dig in with his skates near the goal crease and how to fend off cross-checks and bullying tactics by menacing defensemen.

Hornqvist also added his own touch to this specialized art. While in Nashville, he would ask teammates to stay after practice and fire shots at him ad nauseam. One of those shooters was Shea Weber, whose slap shot has been timed at 106 miles per hour.

Hornqvist explained this act of apparent madness: “When you spend a lot of time with those shooters, you learn the angles of their shots, the force of the shot, where it will go,” he says, speaking in the manner of a physics professor. “You figure out where to place your stick, when to turn your body, all of those little things. It’s not for everyone, but it’s what I do.”

And it is why he is viewed as the modern version of Holmstrom. “[He is] the most effective in the game right now,” according to former Penguins player Bob Errey, now a color analyst for Root Sports. 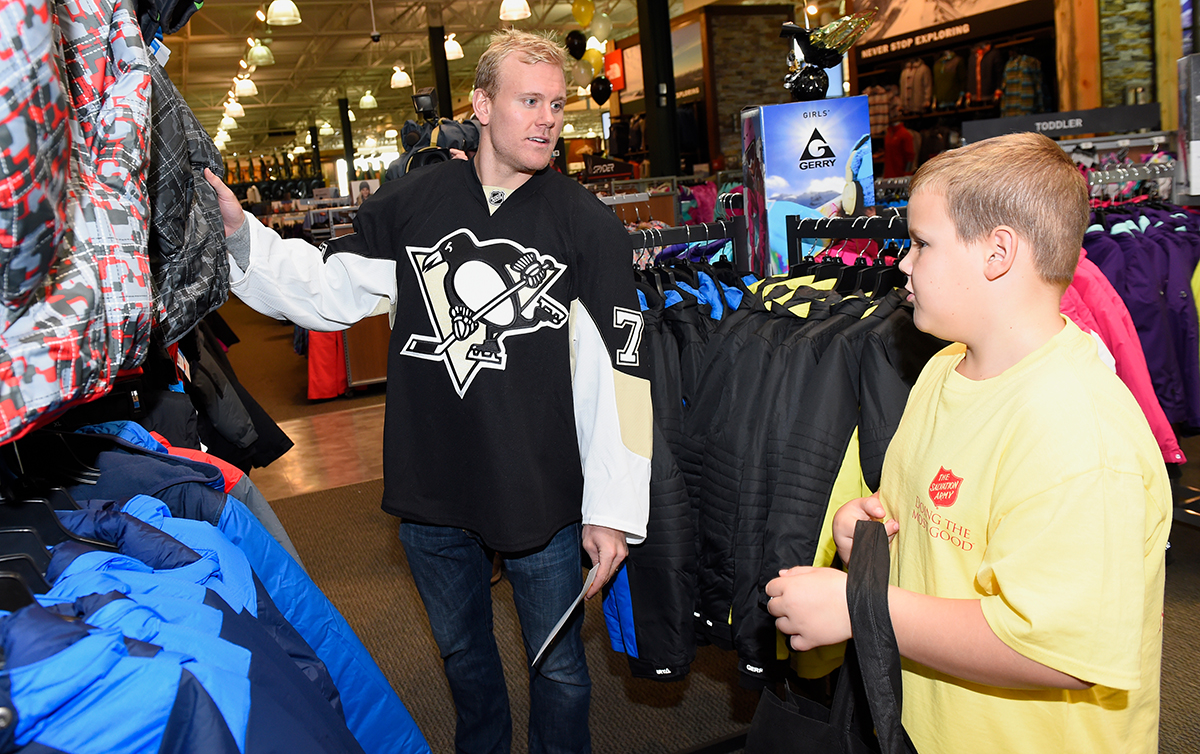 ​Hornqvist also provides energy and enthusiasm that permeates the dressing room. At a recent practice, he moved about the ice at breakneck speeds, chatting away much of the time. He even coaxed a smile out of Malkin while twirling his stick above his head. When asked separately about that charismatic personality, three Penguins — Spaling, defenseman Kris Letang and Kunitz — all used the same adjective: contagious.

“I’ve been with him a long time, even back in the minors, and guys love him, respect him, want to play with him,” Spaling says. “Everyone feeds off of Patric.”

That would include Crosby, who has a unique connection to Hornqvist. In 2005, Crosby was the first overall pick in the NHL draft. The final pick? Hornqvist.

“You never know what’s going to happen in hockey,” Crosby says, smiling. “But for it to work out this way is pretty fun to be a part of. Whoever that scout was, he did a heck of a job with that last pick.”

This article appears in the January 2015 issue of Pittsburgh Magazine.
Categories: From the Magazine, Hot Reads, Penguins