Penguins' Ben Lovejoy Says His HBO Days Are Over

After a stint with the Anaheim Ducks, Pittsburgh Penguins defenseman Ben Lovejoy returns to the team as an effective and tenacious player. 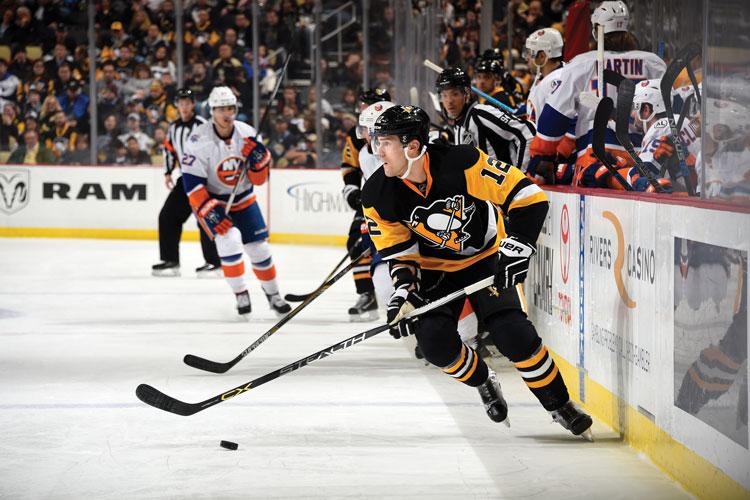 In one scene on the team plane after Lovejoy took a puck to the left cheek, teammates Sidney Crosby and Marc-Andre Fleury are aghast at his swollen face. The camera pans to Lovejoy.

“They said the pressure would make it grow — it did. Can you tell I got hit?”

In another, while Lovejoy and road roommate Mark Letestu are out for dinner, prankish teammates move all of the furniture from their hotel room into the hall. Lovejoy, to the cameras: “We’re going to find out who did it, and probably do nothing about it.”

That version of Lovejoy is only part of his story. Outside of game time, Lovejoy is approachable and intelligent (he is a Dartmouth College grad). He maintains his sense of humor.

But at age 32, he has refined his priorities.

There is his family: wife Avery and daughters Lila, 2, and June, 5 months. And there is his career.

Lovejoy has emerged this season as part of an effective shutdown defensive pair with rookie Brian Dumoulin. “That’s where he’s found his niche and his comfort level,” Penguins head coach Mike Sullivan says of Lovejoy.

It took a journey. Lovejoy hit a ceiling with the Penguins when he was not playing regularly. He welcomed a February 2013 trade to Anaheim. “I would have gone anywhere just for a fresh start,” he says. “I spent a great 25 months in Anaheim, where I really continued to get better as a hockey player.”

In what came as a shock to him, Lovejoy returned to Pittsburgh in another trade late last season. It was initially a rocky return. Because of injuries to several other defensemen, Lovejoy struggled while playing out of his comfort zone — more minutes per game, different responsibilities. Fans weren’t quiet about their displeasure. He says he didn’t blame them.

“I grew up a diehard sports fan. I understand when a team isn’t performing as you think it should, you get upset,” says the New Hampshire native who rooted for the Boston Bruins and still pulls for the New England Patriots.

This season has been more settled for him. He and Dumoulin balance the task of muting some of the top forwards in the NHL with meeting the directive to help their own forwards create offense. Lovejoy has a hard shot (“I wish it would hit the net a touch more,” he cracks) but he offers more in support than in points. He had recorded 13 goals and 62 assists in 317 career games as of press time.

Mostly, Lovejoy wants to be a valued NHL commodity: someone who is tough to play against. He has the endorsement of Crosby; when Lovejoy returned to the team, the captain says he immediately thought back to the tough puck battles they had in practice, a younger version of Lovejoy honing his skills against one of the NHL’s best.

“You had to be ready when you were going against Ben,” Crosby says. “You knew it was going to be an intense drill.”

That intensity shows in Lovejoy’s game face; it’s occasionally seen when he is interviewed by Dan Potash of Root Sports between periods.

“I’m a very serious person during the game,” Lovejoy says. “I roll into the rink at 4 o’clock and I try not to even crack a smile. I need to be focused. My job is incredibly stressful. If I let up for one second, make a bad play, as a defenseman, it ruins my night. During the interviews, they’re catching me at work.”

“That was my first (full) year in the NHL,” Lovejoy says. “I was happy to be a Pittsburgh Penguin, happy to be in the NHL. Having the camera crew follow us around was very cool.

“I try and have a colorful personality. It makes life more fun when you go through it with a smile. Some of that was absolutely captured. I think they did a really good job for HBO.”

“But now I wouldn’t want them anywhere near my life.

This article appears in the March 2016 issue of Pittsburgh Magazine.
Categories: From the Magazine, Hot Reads, Penguins