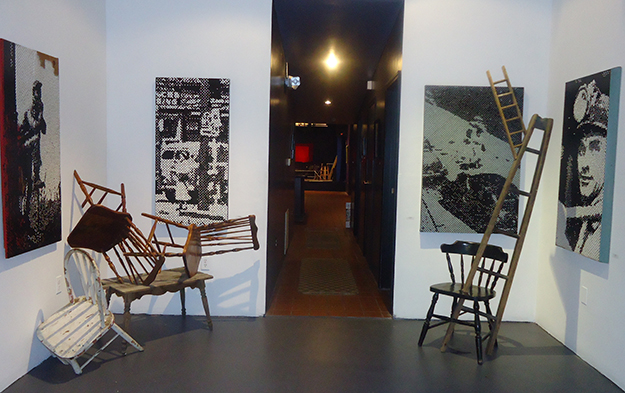 Photo courtesy of the ModernFormations Gallery

Trust me: It’s a good time to live in Pittsburgh. Yes, I know that the Penguins are currently little more than an idea, the Pirates have discovered an all-new way to break our hearts, the Panthers can knock off Virginia Tech but fail when faced with a lowly flock of flightless birds and the Squirrel Hill Tunnel is allowing me to play long games of “Plants vs. Zombies” while seated on the parkway. Put these facts aside.

It’s a good time to live in Pittsburgh because creative performers of all stripes are flourishing, in unprecedented numbers. There’s always been underground and under-the-radar theater and comedy in town; there just used to be a lot less of it, and what was around was notoriously hard to find. Today, though, upstart theater companies, medium-molding comedy troupes and anomalous collectives of uncertain category are visible, successful and plentiful.

Take, for example, 12 Peers Theater. I reviewed their excellent horror anthology The Weird back in January; they’re a charming, passionate group that easily finds the fun in whatever they’re doing on stage. As they gear up for their season proper, they’re putting together a four-night event called the Cultivating Culture series; in their words, “A series of performances of new work designed to foster a culture of creativity as well as engage with the culture of Pittsburgh.”

This Saturday is the second installment in that series, a first-ever 12 Peers Cabaret featuring a few of the company’s favorites. Included are performances by Daina Michelle Griffith, a local stalwart who appeared in The Dark Knight Rises, and Sara Fisher, 12 Peers’ Associate Artistic Director and one of the standouts from The Weird. They’re keeping mum on what exactly a 12 Peers Cabaret features, but the group’s predilections and a cozy performance space — Garfield’s ModernFormations Gallery — promise an intimate and engaging show.

Elsewhere, the burgeoning local improv scene gains another regular feature in the form of MONDO!, an “improvised comedy clatter” appearing monthly at the Cabaret at Theater Square. The titular MONDO — or, more accurately, monologist — is a guest celebrity who performs a spoken piece at the beginning of the evening, giving rise to the improvised scenes to follow. It’s a refined and tricky format for improv, but fortunately, they’ve got the right company to handle it.

The lineup for MONDO! reads like a beginners course on noted ’Burgh improvisers — Woody Drennan, Dave Fedor, Jethro Nolen, Kristy Nolen, Abby Fudor (previously profiled here as part of Frankly Scarlett Comedy), Mike Rubino, John Feightner (also a 12 Peers alum, come to think of it) and Larry Phillis are on tap for this Saturday’s event. And the MONDO himself might be familiar to you as well: PM’s own Rick Sebak will be taking the mic.

Come to think of it, with a fine parking job, you could easily attend both the 12 Peers Cabaret and MONDO! this Saturday night. As well you should. It’ll be one of your best chances to get a glimpse of the new world of performance in Pittsburgh — at least until next weekend.