In the premiere edition of “some guys talking about hockey,” the fellas talk about Crosby's practice physicality, Martin’s millions and Kunitz’s underwhelming haircut. 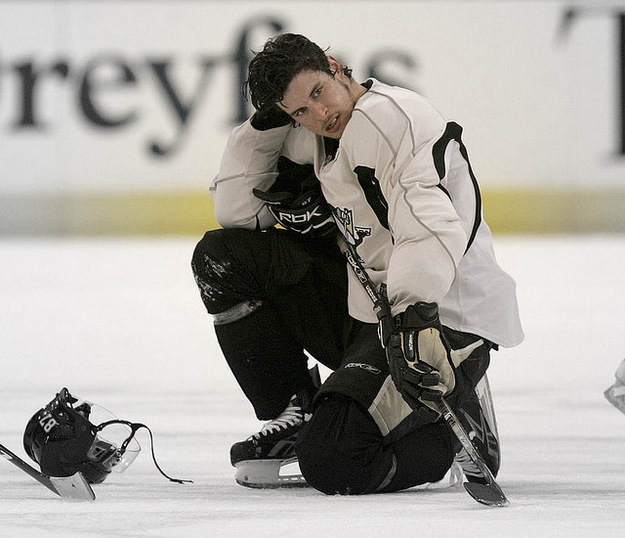 Ever talk to your friend about hockey? Sean Conboy, writer of this blog, and his buddy Mike Paletta, human male, do it all the time. They also talk about other stuff. Welcome to Paul Coffey Talk.

This week’s Paul Coffey Talk is soundtracked by: Justice, “On’n’On”

MP: Sean, you’re a sports journalist or something like that. Tell me when Sid’s coming back. It’s not like I don’t want to watch the Penguins without him, but I’m ready to see the best player in the world again. It’s time.

I saw two practices over the past two weeks, and everyone was trying to screw with Sid as much as his Blue Safety Jersey would allow— halfhearted cross-checks, whacks to the shin pads, facewashes and all manner of good-natured bullying. I’m half expecting to see Rob Rossi tweet “BREAKING: Crosby re-concussed by noogie. NO TIMETABLE.”

So on Wednesday, Crosby and Kris Letang are jockeying for a loose puck at the end of a drill and Letang’s up to his normal screw-with-Sid shenanigans, and guess what? Crosby turns around, drops his shoulder and sends Letang soaring theatrically to the ice. As Steve Stifler might say: YES. H-YES.

Letang made the best of an otherwise embarrassing situation by skating over to Big Steve MacIntrye and pretending that he needed his protection. Sid was cracking up. Comedy of the highest order. Is he coming back on 11-11-11, as rumored? No clue. All I know is that he’s skating and stick-handling like the best player in the world again.

MP: 11-11-11, also the release date of Immortals. Coincidence? Anyone? Enough Sid horseplay chat. Let’s talk about the rest of the team. Any cause for concern despite the solid 7-2-2 start?

SC: Concern? In the real world, or in the Indignant Yinzoid parallel universe? There’s always the Paul Martin conundrum. Martin is earning $5 million a season, which is tied with Marc-Andre Fleury for the third-highest salary on the entire team. He earns more than Kris Letang and Jordan Staal. He's currently the whipping boy of the late night sports talk drunk-dial circuit, and maybe for good reason. Martin is a minus-4 and has registered only 3 assists despite time on the power play. I haven't heard this many fans screaming "shoooot" every time a player gets the puck since the halcyon days of Sergei Zubov. Is the criticism fair? I think Penguins fans are more frustrated by the fact that Martin is an enigma. He's not a big hitter like Orpik or a puck-mover like Letang or a penalty-killing puck-eater like Michalek. He’s indefinable. He's a ghost who somehow finished last season as a solid plus-9 (his fan-favorite defensive partner Michalek was an even 0). Did Ray Shero really make his first big blunder, or does he see something normal fans can't see on their television through the blear of seven Yuenglings? 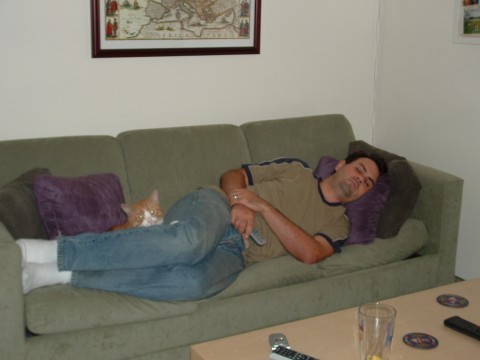 MP: For me, it's not so much his play but how much he makes considering what he does. You can't pay a defenseman $5 million per year to be on the second power play unit and score 3 goals a season. The only thing the Penguins seem to be missing is a booming shot at the blue line. Letang can shoot but he doesn't yet have the penchant for goals or the velocity of a Shea Weber, Zdeno Chara or the like. I know those guys make about $2 million more than Martin, but for $5 million you have to tally more than 24 points. Letang had double the assists of Martin last season while making half his salary. I understand that Martin is a positional defenseman (hockey’s version of the illustrious Game Manager?), but he was 56th in the NHL last season in blocked shots (Michalek was 26th, and you see him putting his body on the line every night, which is why Penguins fans love him and complain about Martin).

Is there a stat for “standing in the passing lane so the opposition doesn’t pass there?” Because that would be Martin’s best stat. He apparently excels at things that are impossible for me to quantify, and definitely impossible to get excited about. Martin is never going to give us "The Shift," ala Brooks Orpik. Maybe he’ll poke-check Ovechkin four-straight times or something. New Jersey Devils fans said that Martin was a little soft when they didn’t resign him, and I can see that now. Don’t get me wrong, I think he is a good player and an asset, but in the salary cap world you can’t have a guy like him making close to what Keith Yandle, Chris Pronger and Duncan Keith are making. Those are some of the best defensemen in the league, and Martin hasn’t shown us that he’s close to that caliber. I understand your point that Martin was a plus-9 last season, but let me just throw this out there: While he played on a more talented team, the defenseman the Penguins were originally trying to sign two summers ago, Dan Hamhuis, was a plus-29 for the Canucks, and makes less money. I don't hate Martin, but I hope his salary doesn’t hold us back from resigning James Neal. 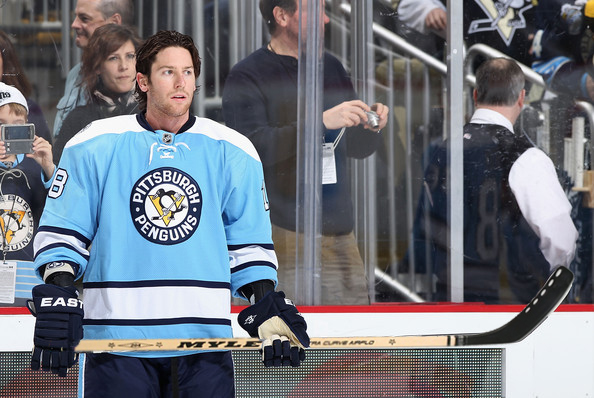 MP: Look, I like Kunitz. He was a big part of the Cup run and does all the little things that coaches, especially Byslma, love. He backchecks harder than anyone except Crosby, he hits and he's relentless on both ends of the ice. But there’s one thing he doesn’t do to the level of his salary, and that’s fill the net. He’s a 20 goal scorer. Period. The dude is 32. He’s not going to suddenly have a 40 or even a 30-goal-season. You don’t pay a guy like him around $4 million a year to do the things he does. My thinking is, you can find a guy like Kunitz for less, but where can you find a guy like Neal? He’s a 24-year-old, 6’ 2’’ scoring winger with a monster shot and he does all the little things that Kunitz does. His 9 goals are even more impressive when you consider that his setup man has been Mark Letestu for half of the games he’s played. Look, if we can lock up Neal and Kunitz that’d be great, but if came down to Kunitz vs. Neal, I’d take Neal every time. Hopefully Shero has a plan in place that will let him keep both, but I just can’t see where Neal’s money is going to come from if he scores 30-plus this season.

SC: Re-signing Kunitz midseason is classic Sherology. When I sat down with Ray last season, he explained that he tries to give Penguins players one fair offer before they hit unrestricted free agency, and if they don't take it, well, best of luck. You see it every year now – once a player hits the open market, prices are wildly inflated. This is why lovable third-line pugs like Colby Armstrong get $3 million to smile a lot in Toronto. I think Shero was worried that Kunitz would put up 30 goals upon Sid’s return and then command an absurd number on the open market. Unfortunately, it looks like he guessed the wrong winger in a contract year. It's James Neal who is inflating his value with every weird, wacky goal he scores this season. Ironically, just as Pens fans are falling in love with Jimmy Real Deal, Shero's in the press box wishing Kunitz could borrow some of his swag, because he can sense the vultures circling with $5.5 million offer sheets for Nealer this summer. (Since Neal is a restricted free agent with a reasonable cap hit, teams will only have to give the Penguins a second rounder if Pittsburgh doesn't match their offer. Woof.)

Here's the thing with Kunitz: Dan Bylsma has a poster of him hanging above his California King. He "gets to our game," as Bylsma preaches, better than anyone. And there's numbers to back up the intangibles. He was a plus-18 last season, second-best behind Crosby (a remarkable number considering he skated without Sid for half the season). He certainly has his limits offensively, but I'll take him on my squad for 3.7 million. What Kunitz really needs is a more intimidating haircut. He's got Junior Account Manager hair. Someone get that man Craig Adams' mohawk clippers.

MP: Enough about haircuts. Let’s talk about the reigning Jack Adams award winner and all around cool dude, Dan Byslma. He’s awesome. He won a Cup. He's got great spectacles. Et cetera.  But I have to admit that the “Bylsma system” does lead to some pretty boring hockey games, especially when Sid and Malkin aren’t in the lineup. I know it’s the conversative style they need to win games without The Megapowers, but still, it’s like watching the Devils in the ’90s. They’re just grinding everything in sight, like the bad kids at a middle school spirit dance. This dump-and-chase stuff isn’t for everyone, especially the casual fan. This is pretty far removed from the up-and-down hockey we were seeing two years ago. Fans have been leaving the CONSOL Energy Center with 10 minutes left in the 3rd period. Ridiculous … But I feel them?

SC: Yeah, yeah. Fans left early when we were throttling the Florida Panthers. Do they still have John Vanbiesbrouck? Being stuck in the smog-choked subterranean hell of a parking garage traffic jam after a weeknight Panthers game is worse than being stuck in Ghaddafi's hide-and-go-seek spot. They should have just flown that stupid Prize Blimp around all game long so Joe Millionaire and Family could have something to pep them up. Is there anything more awkward than craning your neck to the rafters as the Prize Blimp hovers overhead at intermission? Then when it finally drops an envelope everyone holds up their hands up halfheartedly like, “Yeah, whatever, just a coupon for a free GetGo Guzzler, but I'll play along.” Then the envelope flutters uncontrollably toward a section and spontaneously 50-year-old men start chop-blocking little children out of the way like, “Holy Mother of God a manila envelope containing a coupon for a free GetGo Guzzler! I’LL KILL FOR THIS.”) 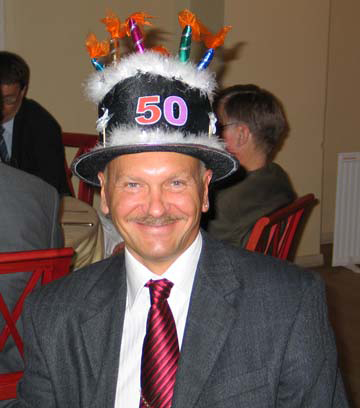 Get ahold of yourself, Larry.

I lost myself there. Bylsma’s system, right? Bob Errey calls it Byslma’s systems, plural, which I find odd. Multiple systems? Downright mysterious. Your boredom probably stems more from the fact that Dick Park is currently our third line center and not because Bylsma is purposely employing some kind of fun-killing New Jersey Devils totalitarian regime. If it was Sidney Crosby cycling the puck down low for an eternity you’d be THUNDERSTRUCK with excitement.

MP: If there’s one thing about Penguins hockey I’ll always love, it’s Bob Errey. He is legitimately funny (“A little slot in the piggy bank” as a euphemism for going five-hole is pure genius). I can’t tell who’s more drunk, him or me.

SC: Last thought: Debbie Flaherty of the nonstop Day Automotive commercials? In the best shape of her life. Gary Roberts must have her eating pure flax seeds and carrying wild boars through the mountains of Saskatchewan.