With the twist of a knee, anticipation has turned to dread for Sunday's showdown at Heinz Field.

It had been the game to circle and savor ever since the schedule came out.

But without Big Ben, it has become the game to dread instead.

Tom Brady, Bill Belichick and the Patriots are coming to town.

And the Steelers’ will be fighting back with two hands tied behind their back (no Ben Roethlisberger and no Cam Heyward). 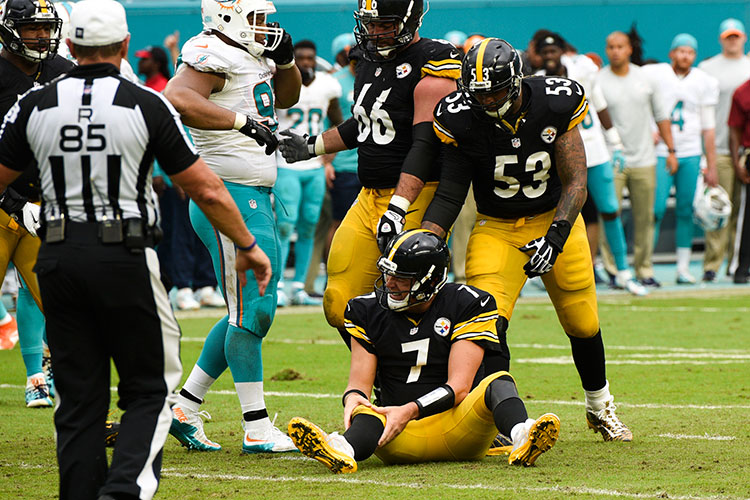 It’s bad enough that injuries are starting to overwhelm the Steelers’ best next-man-up-intentions.

But to have it happen just as the Steelers brace for another visit from the hated Patriots is almost too much to take.

“I don’t have any angst against the Patriots or anything like that,” fill-in quarterback Landry Jones insisted this week.

If that’s truly so, he might be the only one not drawing a paycheck from Robert Kraft who feels that way.

The Patriots are the convicted conspirators that perpetuated “Spygate” and “Deflategate” and who knows what other heinous crimes against the NFL in general and the Steelers in particular on the way to collecting their ill-gotten Lombardis.

Or so goes what seems to be an almost universal perception.

New England has been a hell of a football team in the Belichick Era.

But credit as such has been irrationally refused everywhere but in New England.

It goes far beyond sour grapes for Steelers veterans from the 2001 and 2004 AFC Champion Games.

Former Steelers linebacker and current Steelers outside linebackers coach Joey Porter characterized the resulting emotional fallout as a “natural hatred” for the Patriots.

He did so after his Steelers career had ended and he was playing for the Dolphins back in 2009.

“It goes back to my Pittsburgh days,” Porter once explained on a conference call with the New England media. “I felt a certain way, after some things came out, way back when I was in Pittsburgh, some AFC championships I lost to them, couple times. Come to figure out a few months later why we lost.

“So yeah, I have a natural hatred for them. Period. And that’s just gonna be with me forever.”

The Patriots’ response to such accusations is presumably just as infuriating.

They thrive on playing the role of bad guys, Brady and Belichick in particular.

And if their legacy is stained once you venture far enough on I-95 South, so be it.

They have their trophies.

They have their rings.

And since Brady’s return from suspension this season they’ve looked every inch like a team with serious designs on a fifth NFL title for their current quarterback and their current head coach.

There’s still a lot that can happen between now and Feb. 5, the date of Super Bowl LI in Houston.

But if you’re determined to hate the Patriots every step of the way the rest of the way no matter how it plays out, at least know that you’re not alone.

“I’ll never be over being cheated out of the Super Bowl,” former Rams running back Marshall Faulk insisted in 2013, remembering that day when the 2001 NFL championship was decided and all of a sudden “The Greatest Show on Turf” wasn’t.

Talk about being upset.

“That team up north,” is as far as Suggs will go.

This phenomenon of asterisks and acrimony being associated with the Patriots dates back to before Super Bowl XXXVI against Faulk and St. Louis, to the AFC Divisional Playoffs that postseason against the Raiders in the snow.

New England outlasted Oakland in overtime after surviving a Brady fumble late in regulation that was replay-reviewed into an incomplete pass because of the “Tuck Rule.”

“It was clearly a fumble,” Raiders defensive back Charles Woodson told Sports Illustrated’s “Monday Morning Quarterback” last December. “It seemed like it took forever (to conclude the review that changed the course of history).

“I remember a couple of us on the sideline saying, ‘I think we’re about to get screwed here.’”

It’s tough to reasonably accuse the Patriots of orchestrating that one.

Hating them, anyway, is not.