Plus a preview of perfect-for-the-season cookbook, ‘ROOTS: The Definitive Compendium.’ 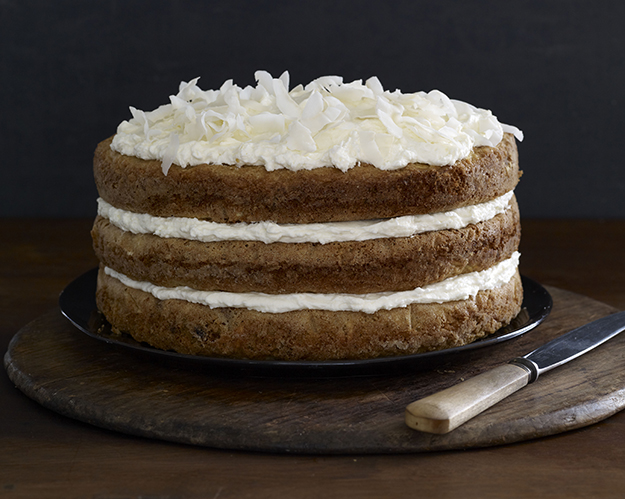 Somewhere along the way, I have become the friend that people apologize to for the “unhealthy” stuff served at parties. They point me to the crudité platter when I arrive and giggle nervously while surreptitiously moving the pigs-in-blankets out of the way.

I mean, seriously. I’m not the Kale Nazi. After much reassurance, most of them have finally accepted that I won’t write a citation for excessive use of lard. However, time and again, when someone sees me eating a brownie or a slice of cake, I’ll be asked, “Is that healthy?” And I typically respond facetiously with “Why yes, it’s made of cabbage!”

But with this cake — this delicious, moist, flavors-of-fall cake – it’s a different story. Read on, friend!

Written by Pittsburgh-native and current Portland-resident, Diane Morgan, ROOTS is a beautifully photographed cookbook with 225 definitive recipes. If you’ve ever picked up a strangely shaped, gnarly-looking vegetable at the farmers’ market and wondered what magical powers it holds, ROOTS is your go-to guide to the hearty, healthful, nutrition-packed, budget-friendly veggies found underground.

When I received a preview copy of the cookbook, I asked Brazen Kitchen friends on Facebook what root vegetable they would like to learn more about. And among the salsify, burdock and rutabaga responses, the most common answer was parsnips.

Actually, I want to learn more myself. I want to like parsnips, but to me, they have this earthy (anise-y?) flavor that’s hard for me to love. So I used that as a starting point with Diana’s cookbook. I scoured the pages and there it was: A glorious looking cake topped with a fluffy white frosting. MADE OF PARSNIPS. Diana is a provocateur.

I set out to make it.

I doubted it the whole time I was making it and even more so as I grated no less than EIGHT parsnips to put in the dough (“Really? Eight?” I tried to send a telepathic question over to Diane on the other side of the country). I imagined an earthy-tasting cake only a “health-food lover” could appreciate. You know, one of those fake cakes. Boy, was I ever wrong.

What came out of the oven was so surprisingly delicious (and since my recipe substitutes coconut milk for the eggs and uses no refined sugar, extra nutritious, too). It is going to be a standby potluck/party contribution for me. I can’t wait to be able to say, amid the exclamations of pleasure, that it’s made of parsnips.

With the cinnamon and nutmeg, the flavors are reminiscent of carrot cake. The cake is very moist, airy and dense at the same time with a texture made even more satisfying by the walnuts. The frosting, I think, is gilding the lily. You don’t really need it (but is a great show-stopper for parties). You can easily make this cake into “bars” and have a healthful snack. Just try not to “pick” at it so much that you end up eating almost half the cake (yes, I raise my hand in guilt).

Go ahead, get some parsnips. And make dessert.

Diane Morgan will be in Pittsburgh next week and there are a couple of wonderful events you should not miss:

Friday, November 2, 11:00am to 1:00pm
Lunch with the Author
Pittsburgh Public Market
Smallman Street at 17th

Below are two versions of Diane Morgan’s Three-Layer Parsnip Cake with Cream Cheese Frosting – as it appears in the cookbook, as well as The Brazen Kitchen’s wheat-free, vegan version.

1. To make the cake, position one rack in the centre and a second in the lower third of the oven and preheat to 350 F.

3. In large bowl, sift together flour, baking powder, baking soda, cinnamon, salt and nutmeg. In another bowl, stir together the parsnips, coconut, walnuts and raisins.

4. In mixer, beat sugar and oil until smooth, about 2 minutes, beginning on low then increasing speed to medium. Add eggs (milk+vinegar mixture and maple syrup) one at a time, beating well after each addition. On low speed, add flour mixture. Using rubber spatula, fold in the parsnip mixture.

5. Divide the batter between the three pans. Bake until they just start pulling away from the sides of the pan and toothpick inserted into the centre of a cake comes out clean, 40 to 50 minutes. For even baking, rotate the pans between the racks and rotate them front to back.

6. Cool in pans on wire racks for 15 minutes. Run a table knife around the inside edges to loosen the cake sides. Invert onto racks and peel off parchment paper. Cool.

8. Place one cake layer, top-side down, on plate. Spread one-third of the frosting over top, to edge. Set second cake layer on top, top-side down. Do the same with the remaining two layers and remaining frosting. Swirl the last layer of frosting. Garnish with coconut if desired.

9. Refrigerate for at least 45 minutes to set the frosting. Remove from refrigerator 30 to 40 minutes before serving.

P.S. AND THE WINNERS OF THE CITY DINING CARDS GIVEAWAY ARE: COURTNEY DUZYK and ZACH COLE (Random number generated)