Out of This World

The 55th Carnegie International goes interplanetary to engage Earthlings in thoughts about life and its meaning on the third rock from the sun. 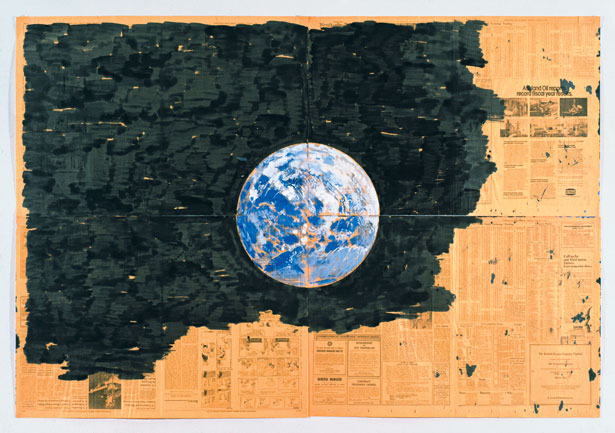 “Untitled (Earth Drawing I)” by American artist Paul Thek (1933-1988) presents a portrait of our planet as might be viewed from outer space. This piece, circa 1974, features acrylic on newspaper.
Image:  The Estate of George Paul Thek, courtesy Alexander and Bonin, New York.

Ploughing through a recent morning’s mail in my office, I unearthed a press kit with the words “Life on Mars” (in blue ink, not red as might have been expected) on the cover. I assumed a new show must be coming to Carnegie Science Center until closer scrutiny revealed, in much smaller blue-outlined white type, “55th Carnegie International.” OK, for the first time since being organized by Andrew Carnegie in 1896, the International, that venerable, continuing showcase of world art, had been given an episode title—and a real grabber at that! Now, you don’t have to be a rocket scientist to wonder why no one had thought of this idea before (at least as far as we know).

“Life on Mars,” which premieres May 3, is the invention of the 55th’s curator, Douglas Fogle—a boyish 44-year-old who is “productively anxious,” a saying he attributes to a grandmother. This Libertyville, Ill., native brings his own Tom Swift sense of wonder to the 112-year-old landmark exhibition. His doctoral work at the University of California, Santa Cruz, focuses on the history of consciousness with an emphasis on contemporary visual arts.

Fogle reveals his muse for that title—David Bowie, and specifically his tune “Life on Mars.” It’s a metaphor, Fogle points out. But ideas take on a life of their own, and it’s easy to fire our imaginations with thoughts of the Red Planet, which has fascinated humans since ancient times—there have been theories about canals built by a dying race, and although those romantic notions were dispelled, Mars continues to renew our wonder by virtue of the space probes we continue to send along with a hope to still find life. (Just doing an Internet search of Mars-related movies I discovered an amazing number of titles: There’s everything from various versions of the classic War of the Worlds to the campy Mars Needs Women. Bradbury’s The Martian Chronicles became a TV mini-series starring Rock Hudson in 1979.)

“To me contemporary art is as much about coming to terms with our own world as it is about creating a set of worlds parallel to those that we walk in every day,” he says. And, as Fogle notes in a more topical global observation, “It’s a different world today since 9/11.” That’s a compelling thought, because it echoes some of the philosophy of his predecessor Laura Hoptman, who commented on curating the 2004-’05 International in a post-9/11 world. Her focus was “The Ultimates,” which served as an informal title and thematic tent in which to showcase work reflecting “the unanswerable questions, ranging from the nature of life and death to the existence of God to the anatomy of belief.”

Fogle’s International carries on and complements Hoptman’s sense of profundity, and, like Hoptman, he chose artists that dovetailed with what he terms the “sensibility” of his theme. Not intended to be a comprehensive “theory of everything” in the art world today, the Fogle International is described by its auteur as “a snapshot, but my snapshot.” Adds Fogle, “I’ve isolated a strain” in contemporary art.

Plucked from a curator position at the Walker Art Center in Minneapolis by Carnegie Museum of Art director Richard Armstrong, curator of the 1995-’96 International, Fogle has spent the past three years globe-trotting in a search for art, with the assistance of an advisory committee.

Assembled for “Life on Mars” is a crew of 40 emerging and established artists represented in 200 works ranging from painting, sculpture and drawing to animation, film, installation and performance.

The oldest of the group is Maria Lassnig (born 1919) from Austria; the youngest is Cao Fei (born 1978) from China. Almost all hail from Europe and the Americas; others are from Asia. Some artists’ work included in this year’s show has been showcased in previous Internationals, including Paul Thek, Rosemarie Trochel, Peter Fischli, David Weiss and Mike Kelley. Two artists are deceased: Italian Mario Merz (1925-2003) and American Paul Thek (1933-1988). The latter’s “Untitled (Earth Drawing I),” an interpretation of our planet painted on pages from the International Herald Tribune, has been used for the International’s showcase image. Why dead artists? No particular reason, says Fogle. “I look at [the artists’ work] as very much alive and communicating to us no matter what the pulse rates of their creators.”

In The Martian Chronicles, an Earthling eulogized the original inhabitants of the planet Tyrr (as the natives called it): “They knew how to blend art into their living. It’s always been a thing apart for Americans. Art was something you kept in the crazy son’s room upstairs. Art was something you took in Sunday doses, mixed with religion, perhaps.” Certainly Andrew Carnegie’s vision in establishing the International was to prevent art from being “a thing apart.” Maybe he and Douglas Fogle would like us to become more like Martians.

This article appears in the May 2008 issue of Pittsburgh Magazine.
Categories: Things To Do