Our Intern Takes a Ride in a Self-Driving Uber

A college student’s spontaneous experience in one of Pittsburgh’s new "driverless" cars. 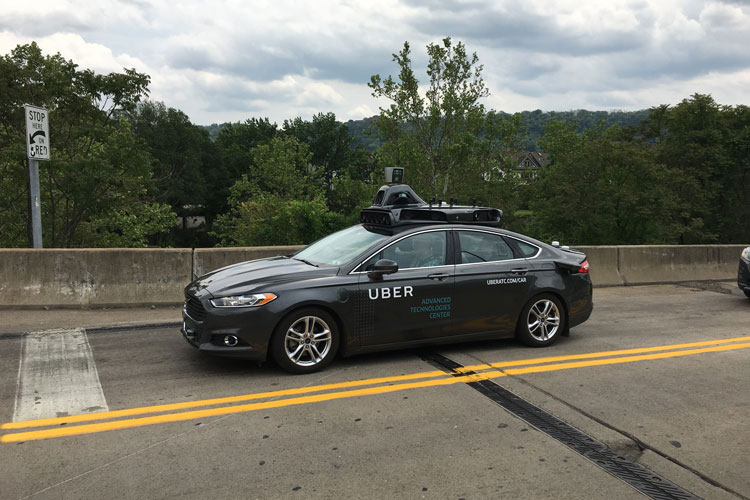 As a student at the University of Pittsburgh and an inhabitant of Oakland, driverless Ubers are nothing new to me — at least the sight of them isn’t. I remember seeing one on the road for the first time last fall and thinking how strange and vaguely alien the car looked. I also remember wondering why Uber would choose to test drive the first driverless car in this city: A land of one-way streets and the home of the infamous “Pittsburgh Left.”

But since the initial release of these driverless cars in September 2016, more and more have been popping up around Pittsburgh. I’ve gone from seeing one every couple weeks to about every other day. So, as a regular Uber user, it was only a matter of time before I got matched with a driverless car — and that time was this morning.

The word “driverless” is a bit misleading: There were two people in the front of the car. One was in the driver’s seat as a safety measure and the other was there to make sure all was going well with the car’s navigation technology. When I got into the back seat of the car, I had to get the ball rolling by pushing a couple buttons on a touchscreen tablet that was mounted in the middle of the car. These were a safety precautions basically asking if I was buckled in and ready to go.

Then we started on the route to my destination. The ride took a little longer than usual but, combined with Oakland’s morning traffic and a little bit of rain, it wasn’t necessarily the car’s fault. As we drove along, I was able to watch our travel progress on the tablet in front of me. The screen alternated between a bird’s eye view of our route and a street-level sketch of what was around us — which the front seat “driver” informed me was the image that the car was able to construct from the various cameras, antennas, sensors and radars it possessed. There was also a selfie option on the tablet so riders could share their driverless Uber experience with others.

Overall, the physical ride was very smooth, stopping at traffic lights and crosswalks appropriately. I did get nervous as we cruised down Forbes Ave preparing to make a left onto Bigelow Blvd., knowing how crowded the crosswalks can be. However, my uneasiness was settled when the car came to a gentle stop to allow the pedestrians to cross the street. Besides a couple slight swerves and the occasional beeping, I barely noticed I was in a self-driving car.

Although it may take me a few more rides to get completely used to the idea of a driverless car, I’d say I’m over my initial apprehension. And $10 for a car ride from the future isn’t bad!