A pick — and another one — for every day of the festival's 60th year. 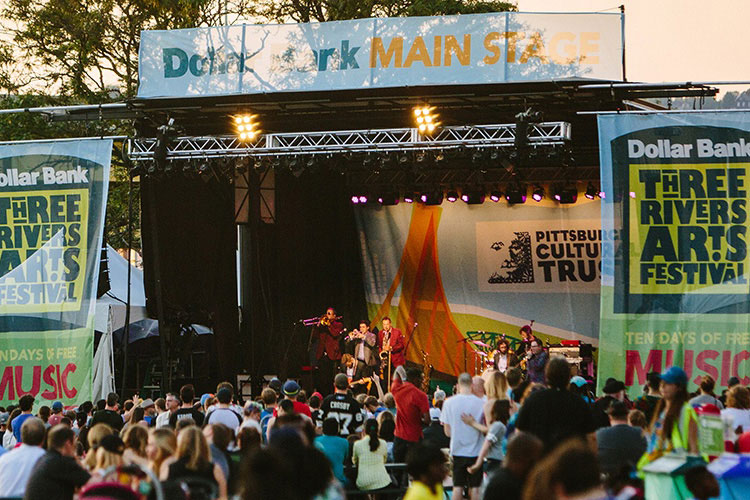 The Three Rivers Arts Festival is kicking off its 60th year of bringing worldwide music and art into the heart of Downtown. As always, the best way to tangle with the festival is to explore — but if you’re looking for some recommendations, this list offers a pick (and a backup) for every day of the fest.

One More: “High and Low Art: Celebrating The Harris Theater's Fantastic Film History” — Harris Theater, Daily, Various Times
Pittsburgh Filmmakers’ Downtown cinema will dive deep into its own history to present classics from world cinema that played at the theater in the 1930s and ’40s — as well as pulpy B-movies that showed up during the same era.

Saturday, June 8
Top Pick: Twilight Sketch Crawl — Portal Bridge at Point State Park, 5-7 p.m.
Come with sketchbook and pencils in hand for this two-hour drawing marathon of sights around Point State Park, with assistance from artist Rick Antolic. You don’t have to be the next Picasso, either; no experience is required. Children under 16 must be accompanied by an adult, and registration is required.

One More: “The Pittsburgh Time Capsule” — Gateway Center, Daily, 12-9 p.m.
Take a little time out of your Saturday to be part of Pittsburgh history: Artist Toby Atticus Fraley is collecting one-minute messages from festival-goers to store in one of two time capsules. Both will be opened in 2120.

Sunday, June 9
Top Pick: “Invisible Man” — Wood Street Galleries, Daily, 12-8 p.m.
Curated by Murray Horne, this installation relies on audience participation. According to Horne, “They invite our bodies to move through environments and installations, completing the incomplete and transforming the abstract into concrete form and experience.”

One More: Members of the Pittsburgh Symphony Orchestra Brass — Dollar Bank Main Stage, 7:30-9 p.m.
The brass section of the PSO will perform classics and new selections.

Tuesday, June 11
Top Pick: J. Roddy Walston & The Business — Dollar Bank Main Stage, 7:30-9 p.m.
The bare-knuckles outfit began as a gritty bar band, but have ventured away from that hard-rock sound to include more all-encompassing aspects of dynamic pop rock. That change hasn’t dwindled the fire of their energetic live performances.

One More: Olivia Townsend — Acoustic Stage at Gateway Center, 5-6 p.m.
The local singer-songwriter will perform a mix of originals and covers from the likes of Joni Mitchell during her acoustic set.

Friday, June 14
Top Pick: Tank and the Bangas — Dollar Bank Main Stage, 7:30-9 p.m.
This New Orleans five-piece creates a unique brand of soul, hip hop and jazz. Elements of spoken word in some of their songs counter the more rhythmic flow of hip-hop in others. Tank and the Bangas won the NPR Tiny Desk Contest in 2017.

Saturday, June 15
Top Pick: “Origami” — Point State Park, 5-5:30 p.m., 9-9:30 p.m.
A choreographed performance uniting dancers and a 40-foot, shapeshifting shipping container makes its U.S. premiere for a limited number of showings on June 14, 15 and 16. Originating in France, this event brings a new kind of art into the Steel City.

One More: Mandolin Orange — Dollar Bank Main Stage, 7:30-9 p.m.
Mandolin Orange shares a state and genre of American folk with fellow North Carolinians, The Avett Brothers. Instruments such as the mandolin (a given), violin and banjo provide a softness to their moving lyrics. Mandolin Orange has been working the festival circuit, recently playing SXSW and the Newport Folk Festival.

One More: slowdanger  — Dollar Bank Main Stage, 4-5 p.m.
The visionary performance duo brings its episodic “memory series” to the festival, hoping to create layers upon layers of intent through the use of old materials.