Our 50 Years: Why I Hate Nostalgia

Enjoying memories is fun – but a far cry from pining for the past.

Editor’s Note: I mentioned the following piece, which appeared in our 25th anniversary edition in 1994, to Rick Sebak at the January party celebrating our “50 Greatest Pittsburghers” feature. He remembered it fondly — it was the first piece he wrote for Pittsburgh Magazine, he said — and confirmed that he stands by his argument a quarter-century later. — Sean Collier 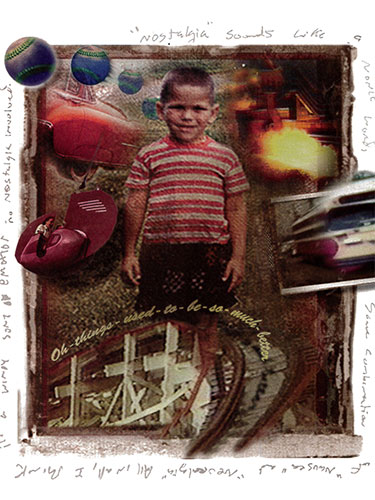 My family drove a bright orange 1954 Pontiac Star Chief when I was growing up in Bethel Park. That car was big, round, stately and beloved. It had orange-and-white leather upholstery and a spiffy, streamlined, Lucite-like head of a Native American chief sticking out of the front center of the hood. More than any car any of us have owned since then, the orange Pontiac had style and majesty.

We all still remember that car fondly. When we look at old family slides, it’s like a big old orange friend. It’s something from our past that’s fun to remember. Does that make us nostalgia nuts? I don’t think any of us long for the Star Chief’s return or hope that one day we’ll own it again.

People occasionally call me “the guy who does those nostalgia shows on WQED.” I shudder. It may be simply the word itself: “nostalgia” sounds like some combination of “nausea” and “neuralgia.” It connotes a condition like “the heartbreak of psoriasis” that could be treated by some over-the-counter remedy, like those graphically illustrated cures in old commercials. Remember Pepto-Bismol coating your throat all the way down? How about the way Anacin took care of those three annoying little boxes in your head? Or Excedrin Headache #23?

There. That’s how it starts. Remembering one thing makes you remember something else. And you’re off! Playing with memories can be easy and somewhat addictive.

People love memories and talking about them. Anyone who’s ever enjoyed a family or class reunion knows how much fun it can be to sit and swap memories that you share with someone else: the year the Christmas tree fell over, the summer before graduation, the dinner we ate last night. Remembering and sharing memories are not necessarily nostalgic.

Nostalgia, as I understand it, is a kind of longing for the past or some aspect of times gone by. It’s a kind of an oh-things-used-to-be-so-much-better feeling, mixed with a bit of sadness (probably brought on by aging). All in all, I think it’s a wimpy sort of emotion that can lead to the old practice of “pining” or “pining away.” It’s not as dramatic (or as satisfying) as rage or grief or joy. It’s a second-class feeling.

Yet there’s nothing second-class about a memory. The human ability to recall and express (often in mind-boggling detail) all sorts of experiences is a crucial skill. The sharing of recollections not only helps create history, but also plays an essential part in the making of literature. Memory makes education possible, whether learning from our mistakes or studying for a biology test tomorrow. And it’s often easy to enjoy the intensity or the expression of someone else’s memories.

In Pittsburgh, we are fortunate that many people who live here stay here. It means that, as with my family and the orange Pontiac, we have certain old things and past events that we share memories of: some big things like Forbes Field and Horne’s and streetcars, but also more personal things like “Party Line” on KDKA, Laff in The Dark at Kennywood and Tech beer. Pittsburghers, being human, love to talk about this sort of stuff and, although we can all occasionally be nostalgic about certain pieces of the past, the simple act of remembering doesn’t necessarily mean that one finds the past worth repeating or even worth mourning.

Remember the black skies that once were this city’s trademark? Smoke and God-knows-what kind of chemicals used to pour out of all sorts of chimneys and smokestacks around here. Some folks might link this area’s cleanup with the eventual demise of the local steel industry, but even such gross oversimplification can’t make nostalgia for pollution seem reasonable.

And in all the recent attention paid to our city’s distinguished Negro League baseball teams, no matter how legendary the players’ skills, no matter how much fun the fans seem to be having in old films, no one really wants to be nostalgic about a segregated world. We might all appreciate certain aspects of a vanished community, but surely no sane person wants to change the title “Wylie Avenue Days” to “The Good Old Days.”

Often, I think, people confuse nostalgia and personal interest in the local past because the history we studied in school largely ignored the kind of everyday memories that can spark conversation and still seem somehow connected to life in Pittsburgh today. History has traditionally been a stuffy sort of political and governmental subject. It doesn’t have to be exclusively that. History can include restaurants that closed and old TV shows, as well as mayors and labor leaders; Primanti sandwiches as well as decisions of City Council.

It’s maybe all a matter of definitions and words: “memory” and “history” as opposed to “nostalgia” or “longing.” It seems a distinction worth making.

If you suspect that a bit of nostalgia might be coloring your memory, keep thinking. The antidote to some sweet, nostalgic recollection may simply be a more complete consideration of the topic.

In fact, there’s a hill out on McKnight Road that always makes me remember the summer Sunday when our big old orange Pontiac broke down on our way home from Pymatuning. I was young, scared, afraid we might be stranded forever like the Swiss Family Robinson out there in the wilds of the North Hills. No nostalgia involved.