Our 50 Years: When We Tried to Predict the Future 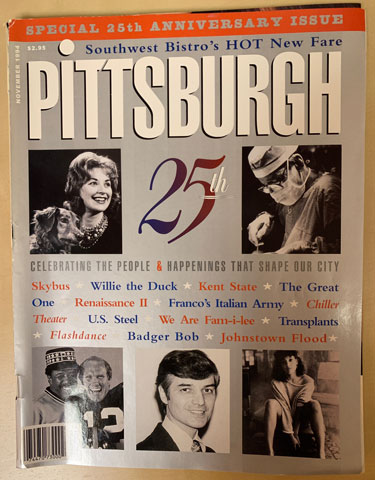 Last month, we marked our 50th year with a tally of the greatest Pittsburghers of years past. A quarter-century ago, however, we were forward-focused with our silver anniversary celebration.

Our feature, “After the Renaissances,” a well-reported piece of prognostication by Paul Kengor, makes some educated guesses about the Pittsburgh of 2019 with the help of a bevy of civic and industrial leaders (many of whom are still in positions of power today).

The main takeaway: Computers are an industry now, and Pittsburghers will soon make money off of them! “The region’s strength in cable companies, software and telecommunications could be an important industry cluster,” Kengor wrote. “In fact, our region employs the third highest number of people in software development — behind only Seattle and the Silicon Valley.”

In true mid-’90s fashion, little attempt was made to define what such “software” jobs actually were. We knew the jobs were coming, but we didn’t really get this whole Internet thing just yet. Despite our ability to anticipate work in the mysterious world of telecommunications, however, we were more than a bit off when trying to forecast health-care trends. We can’t take the blame for that, though — we went straight to the source.

“‘In five years the health care industry will be less in size than it is now,’ [UPMC President Jeffrey] Romoff predicts. ‘My guess is 10 to 20 percent smaller in Pittsburgh and the nation. In 10 years it will be substantially less, possibly by 40 percent.’”

So he was a bit off, there.

Kengor’s piece, like many predictions at the time, assumed that effective and long-lasting health-care reform under the Clinton administration was essentially a done deal; the assumption was that we were about to all get a lot healthier, and the insurance industry was going to take a big hit. Our forecast for the development of Pittsburgh as a medical research hub was sunnier, however: “Additionally, the type of research at UPMC … could continue to allow it to thrive,” Kengor wrote. “Under Dr. Thomas E. Starzl, UPMC is again changing the science of transplantation.”

The piece went deep on the potential impact of the then-forthcoming Mon-Fayette Expressway (apparently anticipating Charleroi as a future hub of activity), but nailed one future travel expansion: the North Shore connector. We were all perhaps a bit too optimistic about further light-rail expansion, though. “[City residents will] benefit from the Spine Line — a two-section extension of the current rail transit system connecting downtown to the North Side … and to Oakland (maybe eventually to Squirrel Hill).”

We did see PNC Park coming, although we failed to anticipate the rise of corporate naming rights; we naturally assumed that the new home of the Pittsburgh Pirates would be dubbed “Clemente Park.” While we were a mile or so off on its location (we guessed the Strip District), one of the happier predictions is that of riverfront revitalization, an ambition of the early ’90s that continues to be explored and expanded a quarter-century later.

We even speculated on who would be responsible for the revitalization of Pittsburgh’s riverfront property. “Charles J. Betters, president of Bet-Tech International Inc. in Aliquippa, is eyeing a 13-acre site beneath the Birmingham Bridge, which he hopes to develop with high-profile New York developer Donald Trump.”

This article appears in the February 2019 issue of Pittsburgh Magazine.
Categories: From the Magazine, Hot Reads, Then/Now