Our 50 Years: What's In The First Issue of Pittsburgh Magazine

In the first issue of Pittsburgh Magazine, we asked some of the same questions that are on our minds today. We also really liked listening to the radio. 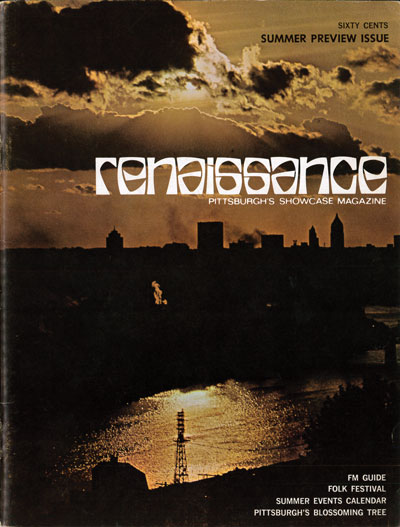 The first words printed in Renaissance, the earliest incarnation of Pittsburgh Magazine, considered the impact of the Steel City’s evolution and rebirth.

So not much has changed.
Before the tech boom of the 2010s and the second Pittsburgh Renaissance of the 1980s, there was the original, mid-century Pittsburgh Renaissance, the first time we tried to shake off our smoky past. The publication that would become Pittsburgh Magazine was named for this civic moment; in true Pittsburgh fashion, however, we immediately began questioning it.

“If the Renaissance City will be born,” the editors of the first issue wrote, “it will be born of the people and their culture, not merely of urban renewal and redevelopment.”

The opening editorial — Roger Schneider was the editorial director, Mary Lynn Menair was the editor and John Machado Jr. served as the inaugural president and managing editor — was a call for a more carefully examined cultural life in Pittsburgh, promising that Renaissance (the magazine, not the concept) would focus on the city’s arts and humanities.

The first article in the history of Pittsburgh Magazine profiled the bygone In Crowd Lounge, a jazz club “just right of the Liberty Tubes.” Writer Anthony Patrick Kirven raved over the house band, Cincinnati and the In Crowd: “The dance floor is small but when Cincy and the group ‘jam,’ people automatically move to the small space.”

Lest anyone think that the publication’s late-’60s birth meant we were at the vanguard of the counterculture, however, the earliest days of our coverage were somewhat traditional. A feature dubbed “Folk Festival” did not profile Woodstock-style gatherings in the aftermath of the Summer of Love — it was a rundown of various ethnic folk outfits. (Think Tamburitzans, not Joan Baez.) The editors of Renaissance apparently had little use for rock and roll; a piano teacher’s workshop merited inclusion under the first issue’s music listings, but an appearance that summer by a then-21-year-old Alice Cooper did not.

While the magazine was not ready to embrace popular music, it was eager to include the work of local artists of many stripes, serving as both a guide to the cultural landscape and an art object in its own right. Vivid photography, art and collage pieces cover the magazine, resulting in a curiously chaotic layout and plenty of striking pages. An editorial cartoon got a full page. The staff was introduced via caricatures.

There was even a full-page poem, by Gail Whitacre.

Buildings rise from states of tension,
Some suspensions last in time.
Balance is achieved in concrete
Cantilever. And it hums.”

Don’t think Renaissance was all klezmer and stanzas, though; the most consistent element of our first 50 years of publishing may well be the restaurant listings. Our accounting of the best dining of 1969 is a gallery of vanished restaurants, from those whose names still resonate — Poli’s, Top of the Towers, Tin Angel — to the utterly unfamiliar. The current staff was dismayed to learn we were born far too late to visit Kon-Tiki, featuring “Exotic Polynesian food served in a bewitching South Pacific Atmosphere,” once located in the suitably tropical climes of Ohio River Boulevard.

Even here, though, some things haven’t changed; then as now, you could enjoy “Louis XV decor and an excellent French menu” atop Mount Washington at Le Mont. “The hilltop view of the Golden Triangle,” we somewhat understatedly pointed out, “is lovely.”

More listings followed, informing readers of the summer offerings at such still-standing locales as Little Lake Theatre (a run of “The Odd Couple”), Squirrel Hill’s Manor Theater (Rod Steiger in “The Illustrated Man”) and the not-yet-national Aviary (“The emphasis of the Aviary is to express the concept of free flight while maintaining ecological accuracy”).
And then, a sprawling, exhaustive feature teased on the front cover … a guide to FM radio stations.

We will not be reviving that one. Even if we are glad that the editors noted “WAMO-FM is certainly a varied FM station, and is a good example of what a broadcaster can do if he decides to use the FM medium to its full advantage.”

Disproportionate focus on the airwaves aside, we hope that today’s Pittsburgh Magazine is still fulfilling the “Statement of Goals and Purposes” listed as Renaissance’s raison d’être. We’ll include it here, 50 years after it was written, in the hopes that our readers will hold us accountable to the goals our forebears set out for us.

Statement of Goals and Purposes