Our 50 Years: Revisiting Our Snarky Period

Back in the bodacious ’80s, the editors of Pittsburgh Magazine were more than happy to roast deserving targets in a yearly round-up of shame. 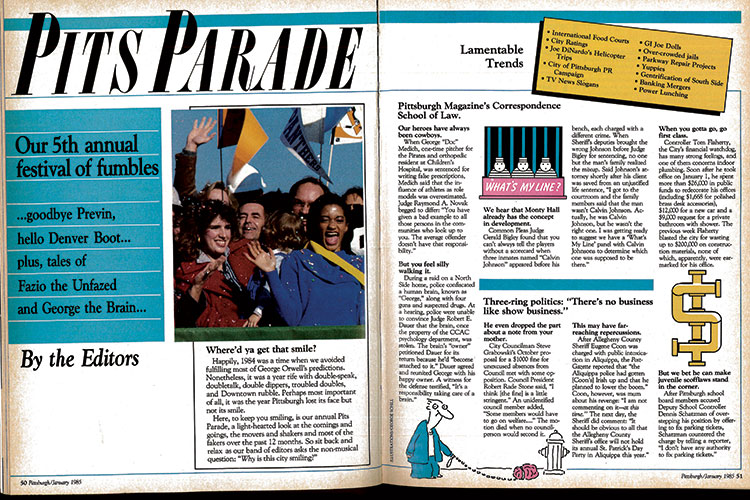 When writing for a regional magazine, there is an understandable aversion to outright negativity. While we don’t want to be blind cheerleaders for the region, it is generally a better use of our space to build up than tear down. When appropriate, we are critical; when possible, we are supportive. We don’t always walk the tightrope, but it’s the goal.

That’s the case today, anyway. In the 1980s, we were unafraid of outright snark.

The “Pits Parade,” a bygone annual feature, served as a place to razz the civic blunders and news-of-the-weird oddities from the preceding year, roasting the mishaps of the pre-internet age.

A look at the 1985 edition reveals that no sector of society was spared the (lightly) critical eye. We had no fear of City Hall, apparently: “Controller Tom Flaherty, the City’s financial watchdog, has many strong feelings, and one of them concerns indoor plumbing. Soon after he took office on January 1, he spent more than $26,000 in public funds to redecorate his offices [including] a $9,000 request for a private bathroom with shower.”

Ah, for the days when old-fashioned graft was still scandalous.

Students were not spared, as we scoffed at the rare college-aged teetotaler. Former Carnegie Mellon University student senator Orpheus Allison — sweet name, by the way — called the cops on a 1984 kegger, leading to several arrests. “I’m sick and tired of hearing kids retch all over themselves,” Allison said. The twist? CMU sided with the party. “We are not in a position to legislate morality,” the university said in a statement, before booting Allison from the senate.

Sorry we had to rub it in, Orpheus. If it’s any comfort, a hot-or-not sidebar in the same feature declared that Nerds are hot and Punks are not.

The “Pits Parade” also brought to attention an unfortunate quote from then-Panthers coach Serafino “Foge” Fazio, who said, after falling to West Virginia University, “A loss is a loss. They’re not going to bring a bulldozer up here and bury the stadium.”

I was particularly interested in a sidebar on “Lamentable Trends,” those fads of the mid-’80s that were beginning to irritate. We regret to inform the editors of the past that some of their least-favorite cultural moments lingered. Get used to “City Ratings,” ’Burghers of the 20th century; it’s 2019, and several are printed within pages of this column.

Fortunately, some “Lamentable Trends” have abated. There aren’t many “GI Joe Dolls” around these days. No one complains about “Yuppies” anymore. And don’t fear further profilgation of “International Food Courts” — we would need to still have malls for that.

I’d advocate a revival of the “Pits Parade,” if only to find room for items such as the following, which is so wild that I’m just reprinting it in its entirety.

“During a raid on a North Side home, police confiscated a human brain, known as ‘George,’ along with four guns and suspected drugs. At a hearing, police were unable to convince Judge Robert E. Dauer that the brain, once the property of the CCAC psychology department, was stolen. The brain’s ‘owner’ petitioned Dauer for its return because he’d ‘become attached to it.’ Dauer agreed and reunited George with his happy owner. A witness for the defense testified, ‘It’s a responsibility taking care of a brain.’”