The No Name Players' newest effort is a near-perfect, thoroughly heartbreaking look at two affairs. 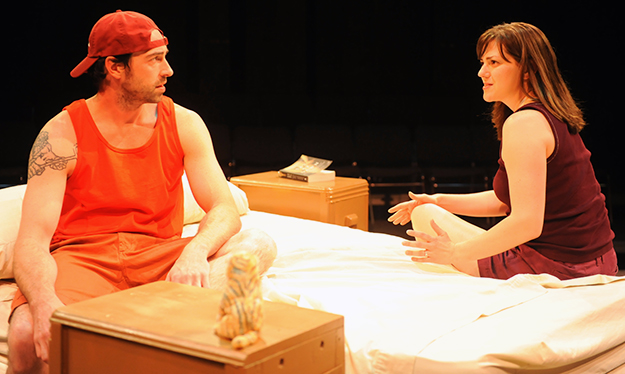 Mike Mihm as Brad and Tressa Glover as Beth. Photo by Lauren Zurchin

Beth is cheating on semi-meathead husband Brad with David, who is himself stepping out on long-suffering wife Cathy. We’re not going to ease into this, though; Orange Flower Water opens in a motel room rented by Beth and David, finally seizing an opportunity to stretch out after months of hasty rendezvous in closets and cars. Even with such an explosive start, though, this isn’t the time when they realize they’re deeply in love; this is the time when Beth questions everything about their relationship and David has to push her back into compliance.

That’s the way Orange Flower Water moves; we don’t see joy, only consequence. Every scene is a confrontation, a face-to-face between two characters who have to admit the truth to one another. Brad and David patrol the sidelines of a youth soccer match in one scene, cheering on their children while Brad probes David for evidence of the affair he’s begun to suspect; in another, Cathy makes David face the practical, unpassionate realities of his decisions. This is a play of ramifications.

In less capable hands, that much on-stage weight would be tough to take; if there’s one company in town up to this sort of challenge, though, it’s No Name Players. The thoughtful and clever direction by Steven Wilson, a Pittsburgh native and Chicago colleague of the playwright, is filled with bold artistic touches that are always appropriate and illuminating, never heavy-handed. Paired nicely with a perfect design team (company artistic director Don DiGiulio as scenic designer, sound designer Ryan McMasters, lighting designer Eve Bandi and costume designer Kari Kramer,) Orange Flower Water is that rare thing among smaller companies: a careful, fully realized artistic vision.

The performers are captivating and compelling, preventing you from taking sides until they want you to. Tressa Glover (No Name’s producing artistic director) is sympathetic as Beth, but not fully trustworthy. Mike Mihm’s Brad is brash and off-putting, but surprisingly earnest. Robin Abramson’s Cathy straddles weakness and strength like it’s a conscious decision. And Ricardo Vila-Roger’s David slowly transitions from victim to culprit as the play unwinds.

About the only caution to be filed about Orange Flower Water is, itself, a compliment; this show is so powerful that it may be hard to recover from, especially in an intimate, inescapable theater like Pitt’s Studio. If you’re planning your weekend, schedule a stiff drink after the curtain falls rather than a light meal beforehand. However you have to get yourself in the mood, though, make it happen; like most everything from No Name Players, this is some essential theater.