Debbi Diggs loves cooking in her kitchen. She describes gourmet meals to die for—leg of lamb, herb-stuffed turkey and a 15-pound suckling pig rotisserie-roasted to perfection.

Picture it: granite countertops, gleaming stainless-steel sink, fridge stocked with essentials. What’s the best part? This well-appointed kitchen is in Jim and Debbi Diggs’ backyard, the centerpiece of a sun-dappled courtyard, which also includes a dining area and cozy outdoor living room complete with a gas fire and a hot tub.

Lovely as her indoor kitchen may be, this outdoor cooking area has won her heart.

It wasn’t always this way. When the family bought its Fox Chapel house in 1997, the backyard consisted of a small concrete patio slab surrounded by a bit of grass. From there, the yard sloped sharply downward into what was an “unpleasant” tangle of trees and underbrush. 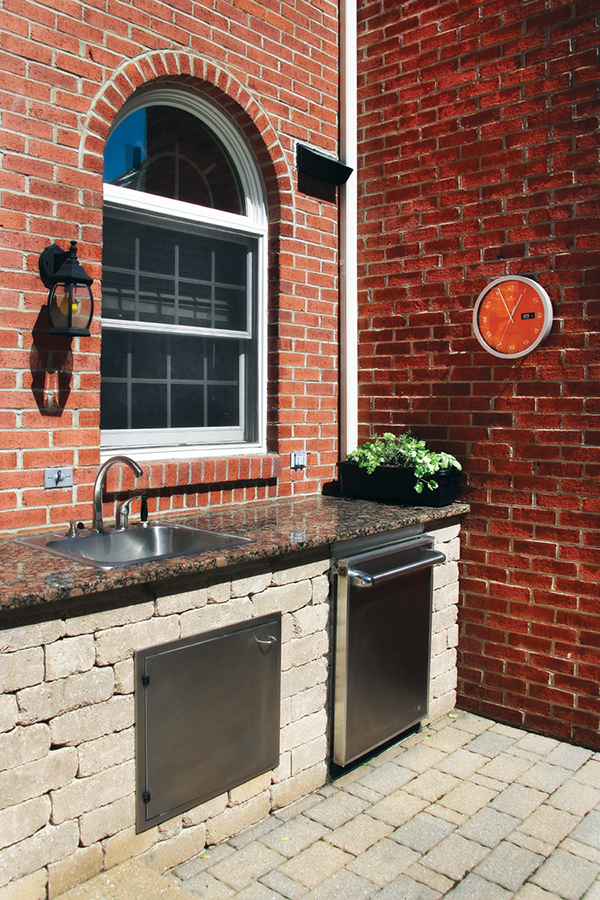 “It was probably one of the worst backyards … absolutely crummy,” Debbi laughs. “We never really went outside the first few years.”

In 2002, the couple decided to change that. They interviewed a half-dozen landscape designers, finally settling on a proposal from Blue Fox Landscape Design, based in Gibsonia. Diggs says she was struck by the plans because Blue Fox’s owner “saw the space as different rooms” and completely re-imagined what the yard could be.

The plan was to extend the level area of the yard, paving it with stones to create the courtyard with a full outdoor kitchen and surrounding that space with a low stone wall. Just beyond the wall, the yard falls very steeply away, and the property ends. But from the courtyard, the view is nothing but lush treetops. It gives the illusion that the property extends for miles.

A graceful Japanese maple with scarlet leaves was added for a dash of color. Beneath it? A trickling rock waterfall. The space feels intimate, but the cooking, dining and entertaining areas are distinctly defined.

At one end of the courtyard, stone steps lead to the lower portion of the yard, where brush was cleared to make room for a swimming pool and a putting green.

INVESTING IN THE OUTDOORS
Seven years after this redesign, Diggs says she still feels as if she’s on vacation when she steps outside. A full outdoor kitchen may seem more suited to Atlanta or Miami, but it’s possible to get nearly year-round use in Pittsburgh, she says.

“We use the patio through November, and then as soon as it warms up enough in April, we’re using it again.”

By summer, Diggs goes on to say, their family of four (son is in college and daughter just graduated from high school) is “barely cooking indoors,” even for breakfast. She lines a baking pan with Reynolds wrap, cooks sausage and bacon on the grill and fries eggs on a cast-iron skillet. In winter, “as long as there isn’t four feet of snow,” she’s out grilling. “I’ve made New Year’s Eve dinners out there.”

The space includes a refrigerator, full-size sink, ample counter space and a large gas grill with rotisserie, extra burners for sautéing and stir-frying, a warming drawer and storage area. A natural-gas line, rather than a propane tank, powers the grill. 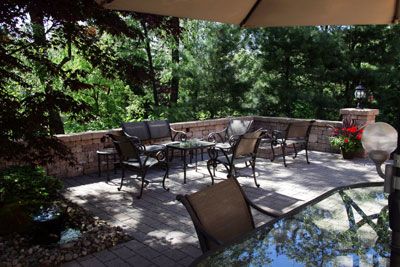 Diggs loves pulling herbs directly from her garden, rinsing them in the outdoor sink and adding them immediately to dishes she’s cooking outdoors.

Her favorite outdoor bonus, though, is this one: “As much as I like cooking, I hate cleaning up. But I even like cleaning up the pans in the outside sink,” Diggs says. “Being outside even makes the undesirable jobs more fun.”

This article appears in the July 2010 issue of Pittsburgh Magazine.
Categories: Style