One Small Step for Yinz 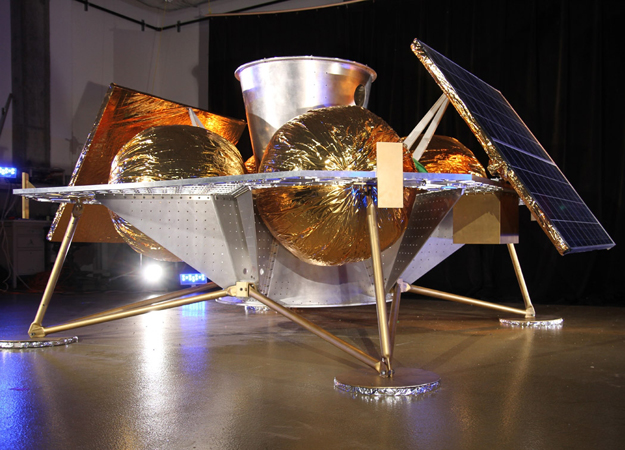 “Space economy”. It may sound like jargon from a campy, 1960’s-era science fiction film, but it is, in fact, a very real and fast-growing part of life in the twenty-first century.   Now, Pittsburgh-based Astrobotic Technology Inc. is looking to set the tone for privately funded space exploration.

The group, a spin-off of Carnegie Mellon University, is one of 26 teams competing in Google’s Lunar X Prize competition. The contest will award $30 million to the first privately funded group to successfully land and manipulate a robot on the moon.

“In pursuit of the moon, a company is absolutely essential, in part because it requires a great deal of initiative, decision making and resources,” says CMU robotics professor and Astrobotic CEO Dr. William “Red” Whittaker. “There's also high return for the risk.”

"There's this cultural view that only governments can go to space and that's just not true anymore," says Tiffany Montague, Intergalactic Federation King Almighty and Commander of the Universe (the title given to the head of Google’s space initiatives.)
"There is a need for commercial ability to undertake space flight."

The team, led by Whittaker, is well on their way to meeting that need. Astrobotic is currently under contract to launch its lunar mission in 2014, with SpaceX, another company making waves in the so-called space economy. Astrobotic’s robot, dubbed “Red Rover,” will be delivered to the lunar surface via a Falcon 9 launch vehicle, and a Lander designed and built by Astrobotic.

Once the robot has safely reached its destination, it will have to perform a variety of tasks in order to win Google’s prize. Most importantly, Red Rover will need to return high-definition video and imagery to earth. Additionally, it must also travel a distance of at least 500 meters (roughly 1/3 of a mile) across the lunar surface.

While these feats seem out of this world, according to Whittaker, none of them would be possible without contributions from people and organizations right here in Western Pennsylvania.

He is quick to praise the contributions of not only large corporations like Alcoa and Ansys, which provided materials and engineering analysis, but also smaller entities, like Johnstown’s Concurrent Technologies Corporation and Edgar Industries of New Kensington, both of which contributed integral work on a specialized aluminum plate used in the lander.

“Pittsburgh does have a justified identity as an iron city in the steel valley but people miss the idea that we have the biggest and best metals and metallurgy in the world,” says Whittaker. “In some ways you can think of Pittsburgh as having an unfair advantage. It's not every town that has the things we have.”

Current mission projections have Astrobotic completing the necessary tasks well ahead of the contest’s end date on Dec. 31, 2015; while this is remarkable on its own, Whittaker’s team isn’t resting on its laurels.

In addition to participating in the Lunar X Prize, Astrobotic Technology has won several contracts from NASA. Most recently the company was tasked with developing robotic systems to explore newly discovered planetary caves, called skylights, on the moon and eventually on Mars.

With all their recent success in scientific exploration, it’s easy to get the idea that the group and their robots may be one-trick ponies, but that’s far from the truth. In addition to its scientific endeavors, Astrobotic is looking to bring a little culture to the moon and beyond.

The group is collaborating with CMU’s Studio for Creative Inquiry to explore ways of implementing various artistic endeavors on the lunar surface.  Through the university’s Moon Arts Project, Whittaker, along with CMU art professor and pioneering space artist Lowery Burgess and an international team of artists, engineers and scientists, have developed several ideas for lunar art projects.

“These things don't occur in a federal mission,” says Whittaker. “Given that this is commercial, there is a the opportunity to be inclusive and to incorporate many forms of human expression and enterprise that are non-traditional. Art being one of them. It will let us go beyond just looking at a picture of a rock on mars.”

In addition, Whittaker says there is a huge potential to allow the public to interact with the rover and art once it’s left earth. Specifically he said the possibilities of allowing the public to zoom and pan a robotic rover’s cameras and even drive it across the lunar surface are being explored.

“It's the kind of thing that could be operated from our science center, or anywhere in the world,” he explains. “That mission and that rover are going to be up and running around that clock. It's always primetime somewhere around the world. The opportunity for interaction is global, and that's really cool.”

This article appears in the January 2012 issue of Pittsburgh Magazine.
Categories: Community Feature