One-Act Play "Building the Wall" Is a Cautionary Tale

The 12 Peers Theater play offers a picture of a dystopian future in Trump’s America. 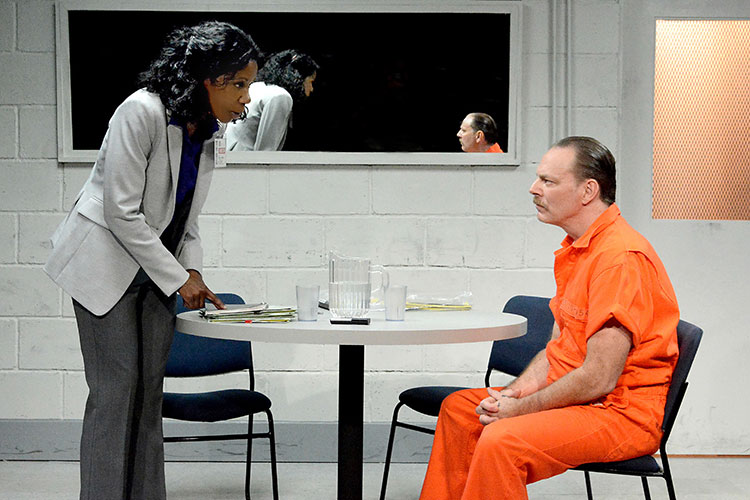 It’s 2019. As part of a crackdown on immigration, the Trump administration has instructed law enforcement to arrest anyone they suspect of being a risk to public safety or national security.

How those events quickly spiraled into a modern-day Holocaust is the premise of “Building the Wall,” which will take the stage at 12 Peers Theater this month.

Tony- and Pulitzer-winning playwright Robert Schenkkan penned the one-act, two-person play in the week following the 2016 presidential election. Through the character Rick, a former prison guard who’s now in prison himself awaiting trial for his role in the events that transpired, and his interviewer Gloria, a black professor of history, we see two ordinary people trying to come to terms with the new world — and how we got there.

“It’s a cautionary tale, not a reality play,” says 12 Peers Artistic Director Vince Ventura. “I don’t want to make a statement that says everything out of this administration is hateful and racist. I think what we’re trying to say is, ‘Look at this trend,’ and say, ‘If we’re not careful, this is where we could end up.’”

Ventura says the timeliness of the play’s events made it appealing to 12 Peers, which focuses on contemporary works, but also put pressure on the company to produce it quickly.

“The genre changes if you wait until 2020,” Ventura says.

Within the two years between Trump’s election and the time of the play’s setting, Muslim extremists have detonated bombs in Times Square, destroying two square blocks. The president has declared martial law. Illegal immigrants have been rounded up into detention facilities, set to be “removed” from the country.

But then problems arise: 24 countries, including Mexico, refuse to accept the detainees. The facilities become overrun. The immigrants are placed elsewhere: large tents, a football stadium. Then, a cholera outbreak. There’s not enough medicine, enough security. People are dying. There’s nowhere to dispose of the bodies. The situation spins out of control faster, faster. And it seems as though no one tries to stop it. 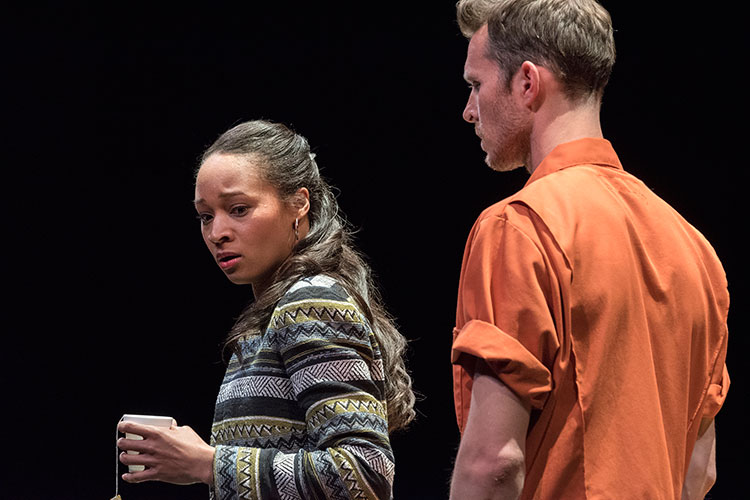 “I’m just a guy, all right, a regular guy in extraordinary circumstances trying to do the best he can with very limited resources,” Rick tells Gloria. “When things turned serious, you know, it wasn’t like I jumped at the opportunity.”

It’s a chilling turn of events — many of which are difficult to absorb, even in a fictional play and even as a retelling (as opposed to watching the action unfold on stage).

“I got sick to my stomach a little bit with some of the descriptions,” “Building the Wall” director Ricardo Vila-Roger says. “Something that everyone seemed to dismiss and say it seemed so far-fetched doesn't’t seem so far-fetched now.”

But one thing Ventura doesn’t want is for the production to tell people how to feel.

“What the play does extremely well is paint two full portraits of characters with opposing viewpoints. It makes them confront each other as human beings, and what I really think we are missing now in the rhetoric is the ability to stop and look at the other side of the aisle and show some compassion for human beings … No progress can be made without compassion.

“I think it’s important, because if people are alienated by it, if you’re a Trump supporter, come out and see the play,” he adds. “Let’s talk about it.”
Vila-Roger says he realizes the nature of the play could be a pitfall for its production, and he wants to avoid it coming across as “preachy.”

“It’s essential to have two very real people on the stage with two different points of view and they’re having an honest discussion,” he says. “It’s just important those two people on stage feel as real as possible so it’s not the archetype Republican and Democrat having it out.”

With Rick (played by Tom Kolos) as a white character, and Gloria (played by Lauren A. Bethea) as a black woman, Ventura says it was important to have a voice missing from the stage represented in the production: that of the 27,000 Hispanics who are killed in the story within the story. Ventura says that made hiring the Puerto Rican-born Vila-Roger, whom he had been wanting to collaborate with for years, all the more important.

In thinking about the play’s theme, Ventura cites liberal author Naomi Wolf’s book: “The End of America: Letter of Warning to a Young Patriot,” where she describes 10 steps that lead to a closed society. One of those steps is a hyper-military police presence, like that in the play.

“It’s a very clear path, and if we aren’t aware of that path we are really apt to follow into it,” Ventura says.

This article appears in the May 2018 issue of Pittsburgh Magazine.
Categories: From the Magazine, Things To Do