After a history-making stinker to end the season, PittGirl's Pirates bandwagon is sinking to the bottom of the Mon. Save yourselves. 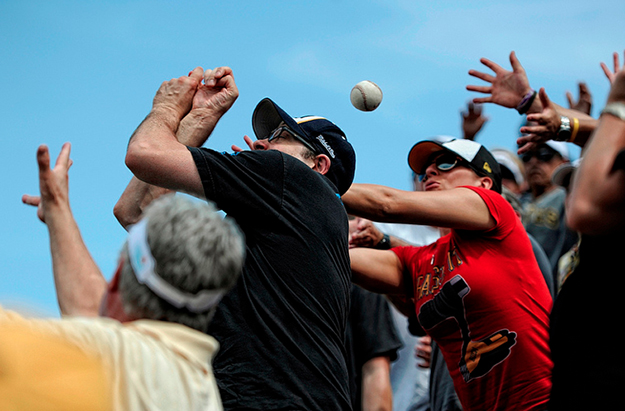 More ups and downs than the Kangaroo at Kennywood! Streakier than the hair of a Warrant groupie! Welcome to the 2012 Pittsburgh Pirates' season!

I'm not the resident sports blogger here at Pittsburgh Magazine. That would be Sean Conboy, and he will probably write about the Pirates' 20th losing season with deep insight, genius metaphors, and his own personal brand of witty writing in which he brilliantly crafts sentence after sentence of pure perfection wherein each word falls exactly where it should to convey what this season could have been and what this season ended up being. He will leave you nodding your head while your internal soundtrack goes something like this: "Amen! Testify! Hallelujah!" You may even shed a cathartic tear that someone managed to put into writing exactly what you were feeling in your heart about our Buccos and their management.

Me? The resident "everything else" blogger who built and piloted the Pirates bandwagon this year? Well, I just want to type a lot of profanity and then when I run out, I want to invent new, more expressive forms of profanity. I want to punch things and then kick them where they fall. All of my attempted heartfelt, nod-worthy and Amen-pulling sentences get interrupted with keyboard smashes. "The Pirates, for the first time in two decades, came so close to a winning season they jksdfj welkfjaf;lkjawe;flk awef;lkwejfj–"

Every year. Every year I get excited and I try to get you, Pittsburgh, excited too. I coax you onto the bandwagon and I tell you to believe. This is the year. This is the year it all ends. The curse is broken. Open your wallet. We might not make the playoffs, but this is the year we play above .500 ball. I tweet incessantly about the Buccos. I watch almost every single game. I hashtag my tweets with #thisistheyear or #believe or #zoltan or #istillbelieve or #Istillstillbelieve or, as the season wore on post-All Star Break, #I'mTryingtoStillBelieve or #WhatInTheNameOfSidBreamIsHappening?!

Keeping in mind that I'm not the esteemed resident sports blogger, here are my final thoughts on what could have been the first winning season since I was 18-years-old. Please don't do the math, and if you do, please end up with 32.

ZZzzzzzzoltan: The Zoltan started as a questionable and quite dorky-looking gesture as the Bucs mysteriously started flashing the Z on extra base-hits, leaving Pittsburgh to try to figure out what they were doing. But winning makes even the dorkiest things cool and you better believe that if the sign of Zoltan was a self-butt-slap paired with a crotch thrust, when the Bucs were 16 games over .500 ball, all of Pittsburgh would have been thrusting their crotches at each other in celebration. The Zoltan now? Let it rest in peace. It's a painful reminder of what could have been, and of that lame Dude, Where's My Car? movie. Let that RIP too, Ashton Kutcher.

We don't need no heroes: Drew Sutton put the Pirates at eight games over .500 for the first time since 1992 and tied them for first place in the division with a much-celebrated, much-talked-about walk-off blast on July 3, 2012. He would be gone by the end of the month, designated for assignment to the minors. Drew is a perfect metaphor for this season. On top of the world with a celebratory pie in his face after bringing the Pirates to the apex of the division only to find himself with an AAA team, batting .063 in his last ten games. Stop the ride; I need to puke. (I'm not so good with metaphors, Mr. Conboy).

On the bright side: Well, let's at least admit there are some positives that came out of this season. You simply can't (or at least I refuse to) discount the fact that at one point mid-season the Pirates were a whopping 16 games over .500. You can't discount the fact that a winning season was a possibility right up to the end of September. Three words, Pittsburgh, that haven't been uttered in a long, long time around these here parts: "No. Parkway. Traffic." Also: "Meaningful. September. Ball." That is, to me, a big deal and something to feel good about. In addition, Pedro broke out of one of the worst, almost comical MLB slumps I've ever seen to bat a respectable .245 this season.

The Pirates cared. They cared about winning so much that they adopted a ridiculous hand signal and they bonded over it and they became a true honest-to-Myron TEAM, and I can't remember the last time I felt like the Pirates were a team, much less a team that cared. More than that, Pittsburgh bonded over the team like only a true sports city can, and it gives me hope for next season. I can't believe I just typed that. I need to seek professional help or something.

Still third … but: If the 2012 season proved anything, it proved that Pittsburgh absolutely has the potential to become a baseball town. We just want to win. We just want something worthy to cheer on outside of pyrotechnics, '90s musical acts and bobbleheads. This season saw Bucco fever in epidemic fashion — like SARS without the threat of dying. Yinzers who would normally have been sporting year-round Pens or Steelers jerseys were buying Zoltan shirts and not using them as bonfire tinder. Disgruntled fans who long ago vowed to never give Bob Nutting another single cent were opening their wallets for eight dollar beers and Jolly Rogers so big they sounded like pirate ship sails caught in a storm wind when they waved. The players were talked about at water coolers, recognized on the street, marveled over by the media, and embraced wholeheartedly by a city that has for so long wanted the prodigal team to come back home to winning.

But for now, if you're still on my bandwagon, I can't say this adamantly enough: Tuck and roll, because this sucker is about to burn like the fires of hell before meeting the bottom of the Mon.

This article appears in the October 2012 issue of PittGirl.
Categories: PittGirl