In her recently published autobiography, Yolanda Avram Willis speaks out about her experiences as a childhood survivor of the Jewish persecution in Greece. 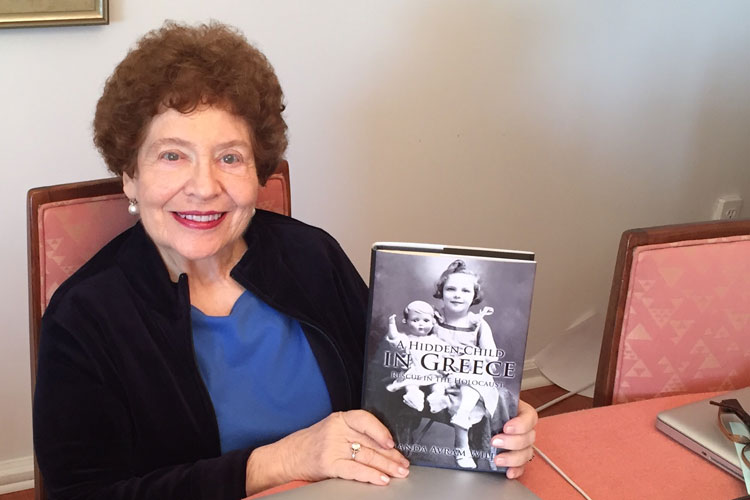 For more than 20 years, Yolanda Avram Willis has been sharing her decades-old story of survival during the Holocaust in Greece.

Often starting her story by pointing to the ring she wears on her right hand, Willis, who became inspired by the oral history project at the Holocaust Center of Pittsburgh that encourages survivors to record their stories, recalls the story of the engagement ring that she thought had been lost or stolen during the Jewish persecution in Greece, once belonging to her mother.

In her Oakland home, days after her 83rd birthday, decades after discovering the truth, Willis picks up her book, “A Hidden Child in Greece: Rescue in the Holocaust,” and begins to recount the story of the ring: “My father was the businessman, but never did he make a better investment than my mother made with her ring.”

“My mother gave me my future. Now I have the ring, a trophy for my mother — a trophy for our victory after all,” Willis reads with tears from her book. Twelve years after the war, when Willis came back to Greece to be married, she learned the truth behind the “missing” ring. “I looked down and saw my mother was wearing the ring, so I asked her where it had been all of those years. She replied, ‘How do you think you think you went to school all these years?” says Willis, who has lived in Pittsburgh for 50 years.

Her mother had used the ring, which she kept safe during the Holocaust by turning around on her finger so the jewel was hidden, as collateral for Willis to attend Pearce College, an expensive American school in Greece. Shortly after the war, Willis’ father began taking loans from a Jewish organization helping families get back on their feet. When the family started to run out of money, Willis’ mother knew in order for her daughter to continue to study, she had to use the ring as collateral. Willis’ education at Pearce College would lead to a Fullbright Scholarship, allowing her to study in the United States at the University of Wisconsin-Madison, where she would receive a master's degree in chemistry. After the youngest of her three children was born, she would go on to receive a master’s and Ph.D. in sociology and begin a 22-year career path in research, management, consulting and education. 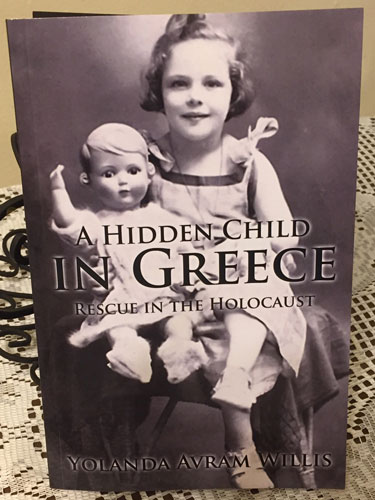 Often separated from her mother while in hiding, Willis had been blind of her mother’s aptitude to disguise the ring, the same way Willis and her family had disguised themselves for nearly four years.

Willis was 6 years old when the Axis powers of Germany, Italy and Bulgaria began to invade Greece during World War II. This invasion came with consequences for the Greek Jews who were constantly being sought after for persecution. For three and a half years, Willis and her family had to live in hiding disguised as Christians. “Julia” became Willis’ secret identity, and she was constantly forced to adapt her story so that her true identity would stay hidden. Willis and her family often had to relocate to various parts of Crete and Athens, but because of families willing to hide them, they survived the war in Greece and were liberated on Oct. 14, 1944.

Willis, who jokes that she was born to act, says that taking on another persona was not the hard part about being in hiding. In fact, at times she even enjoyed making up the stories about who she was and where she came from. The hard part for Willis was watching her family struggle, especially after liberation. “My brother had become so used to the lie that it was hard for him to adapt back into our true life,” says Willis. “It was hardest on my mother having to regain the trust of her son,” her youngest child.

The courage to write a book came shortly after the death of her brother and only sibling, about 30 years ago. “Sometimes it was very hard,” says Willis as she speaks on the emotional process of writing the book. “Especially when I started to revise it to be more self-disclosing. I had started by keeping my privacy, my family’s privacy, about certain things.” In the final phase of her writing, Willis realized that these parts of her story needed to be told to encompass to the whole truth, the whole story.

Willis’ book, published earlier this year by AuthorHouse, recounts her survival and life after liberation; a second part shares stories from other survivors and their rescuers as well. “The book is a thank you to all of my rescuers and an opportunity to tell my truth,” says Willis. “Part two has nothing to do with me, but it’s important to tell their stories because it gives more cultural context [to what happened during the holocaust].”

The idea for the second part of the book came as Willis began traveling back to Greece, often with her family, and hearing the stories of the other rescued children and their rescuers. “I took my children and grandchildren on trips to Greece so that they could learn my story and meet the family of my rescuers,” says Willis. “I made sure that they knew each other and that they understood.” One of her seven grandchildren is named Julia, the Christian identity Willis assumed.

Willis did share her story before her book was published, speaking at institutions such as Carnegie Mellon University and the Holocaust Center of Pittsburgh. In 1996, she was the assistant producer of “It Was Nothing … It Was Everything,” a documentary film about 10 Greek rescuers, including one who had helped Willis. Her writing is part of several published collections including “Flares of Memory,” an anthology of childhood holocaust stories published by Oxford University Press. Although she does not plan to write any more books, she says she will continue to tell her story with talks and lectures as she has done for many years. Most importantly, her story will continue to be told as her story — and her book — is passed down through generations and generations of families, both the rescued and the rescuers.

“A Hidden Child in Greece: Rescue in the Holocaust” is available in hardcover, paperback and eBook formats at various locations including AuthorHouse online bookstore, Barnes & Noble and Amazon.